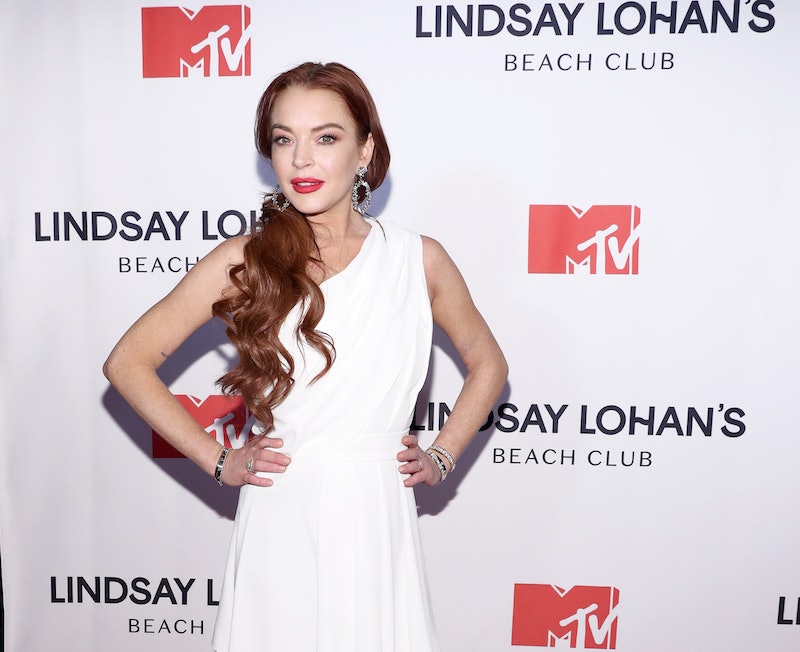 The eleven-year wait is over, pop fans: Lilo's got new music. On Monday, Sept. 23, Lindsay Lohan released a new song called "Xanax" on Instagram's video platform, IGTV. "Xanax" is the actor/reality TV personality/nightclub owner/pop star's first single since 2008's "Bossy." And yes, it is good. All of the patience paid off.

"Xanax" arrived on IGTV with a new video in tow. In the Instagram post's caption, Lohan wrote, "This video is a compilation of vignettes of life. Family, love, the process of moving forward and letting go of the past. To live and be happy, free of fear. Just to be grateful and open our eyes to our opportunities instead of numbing the mind."

The track, which features Finnish recording artist Alma, is a buoyant, and listenable dance tune that touches on themes of anxiety, clubbing, and complex emotional connections. "I can't be in this club," the "Xanax" chorus begins, "It's too crowded and I'm f*cked." A few lines later, she sings, "I got social anxiety, but you're like Xanax to me, yeah/Social anxiety, when you kiss me, I can't breathe." Oh, and as The Cut noted back in August, it samples Alice Deejay's "Better Off Alone."

Lohan's been dropping hints that new music would be coming down the pike for the last few months. On May 31, she posted a photo she took while she was in a recording studio. The following day, she shared another recording studio snapshot. The day after that, she tweeted a report about her recording studio IG posts and what they presumably mean. In that same tweet, she wrote, “Hard At Work.” A few weeks later, Page Six reported Lohan signed with Casablanca Records, the label that released her first two albums. On June 3, a rep for Lilo confirmed to Page Six that the Mean Girls actor would be “dropping new music within months.” And according to Us Weekly, a source said Lohan "got right back into the recording process and has been putting in a lot of time" and "already finished a few songs."

Fans didn't have to wait too long to hear one of the Lindsay Lohan's Beach Club's star's finished songs. A snippet of "Xanax" popped up on the Aug. 28 episode of Virgin Radio Dubai's The Kris Fade Show, along with the promise that it would be "dropping really soon." Host Kris Fade said the song is "about anxiety and pressure and just taking care of yourself." He continued, "And I think that’s really, really cool. I think there’s a really cool message behind it.”

The day after The Kris Fade Show sneak peek, Lohan posted a video on Instagram in which she is dancing to "Xanax" with choreographer Alex Mugler. Less than two weeks later, she shared another preview of the song on IGTV. And then, on Sept. 23, the very same night she made her debut as a judge on the Australian version of The Masked Singer, she put the whole song and a music video on IGTV.

Praise be to Thingamajig. Lilo's musical comeback is officially here, and it's off to a powerful start.