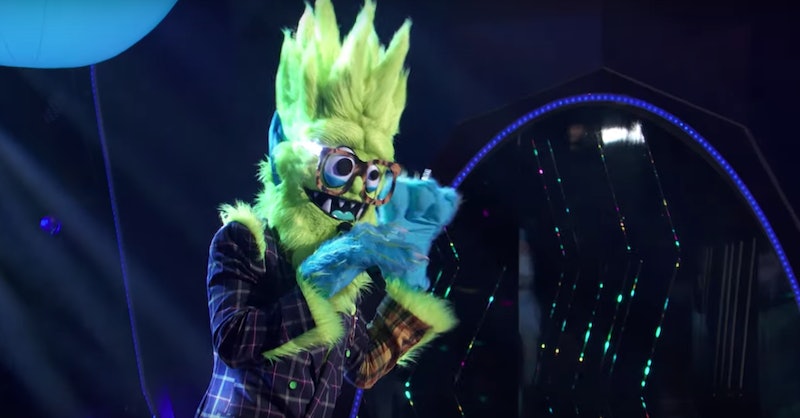 The second season of the most important singing competition series of our lifetime will commence on Sept. 25, so prepare to put your guessing hat (er, mask?) on. Or hey, you can put it on now and get a head start: In a preview for The Masked Singer Season 2 that was unveiled at E! News on Tuesday, we meet a contestant in a “Thingamajig” costume. Thingamajig is a big furry bipedal creature who wears a snazzy suit and eyeglasses and sings with a voice of made of honey and gold. We hear a snippet of Thingamajig belting out Kacey Musgraves’s “Rainbow.” It is beautiful.

Going off of the preview, it seems safe to assume Thingamajig will be on the show for a while: As he sings, the panel of judges all but falls to the ground. Jenny McCarthy’s jaw drops. Ken Jeong blinks in disbelief. Robin Thicke listens intently. Nicole Scherzinger clutches her chest and cries, “Oh, my god.” They do not wait for Thingamajig to finish singing before they gave Thingamajig a standing ovation.

Who is the celebrity who brought the judges to their feet while singing a Kacey Musgraves song in a getup that looks like what would happen if you mashed Sulley from Monsters, Inc. up with Brobee from Yo Gabba Gabba!, wheeled out the industrial strength hair gel, and handed him a sharp pair of tortoiseshell glasses? We do not know yet, but we shall find out soon enough.

Thingamajig’s identity will be revealed at some point in the upcoming season, but for now, we cling to our guesses. Some fans think it could be John Legend behind the Thingamajig mask, which would be incredible. If Thingamajig drops any hints about winning an EGOT, we might as well close the case.

It is worth noting that Legend is one of the coaches on the upcoming season of The Voice, which is set to kick off two days before The Masked Singer Season 2 premieres. If he did decide he was up for being on two singing competition series at the same time of year but on different networks, it would really be something if he were on the The Masked Singer and The Voice at the same time.

Other Masked Singer fans believe it could be Wayne Brady, which would also be incredible. The Whose Line Is It Anyway? star's voice is a true force, and it would be so fun to see him on this goofy fever dream of a show.

We may not know who wears the Thingamajig costume, but we do know that Thingamajig has major star power. Just look at those glasses. That hair. That grin. That "The Masked Singer Season 2 is mine to lose" look in his eyes.

Whoever is in the Thingamajig costume will be up against Butterfly, Eagle, Flamingo, Fox, Ice Cream, Leopard, Panda, Rose, Rottweiler, Skeleton, Spider, Tree, and an egg who wears a sunny side up egg on its head. This show is iconic and don't you forget it.