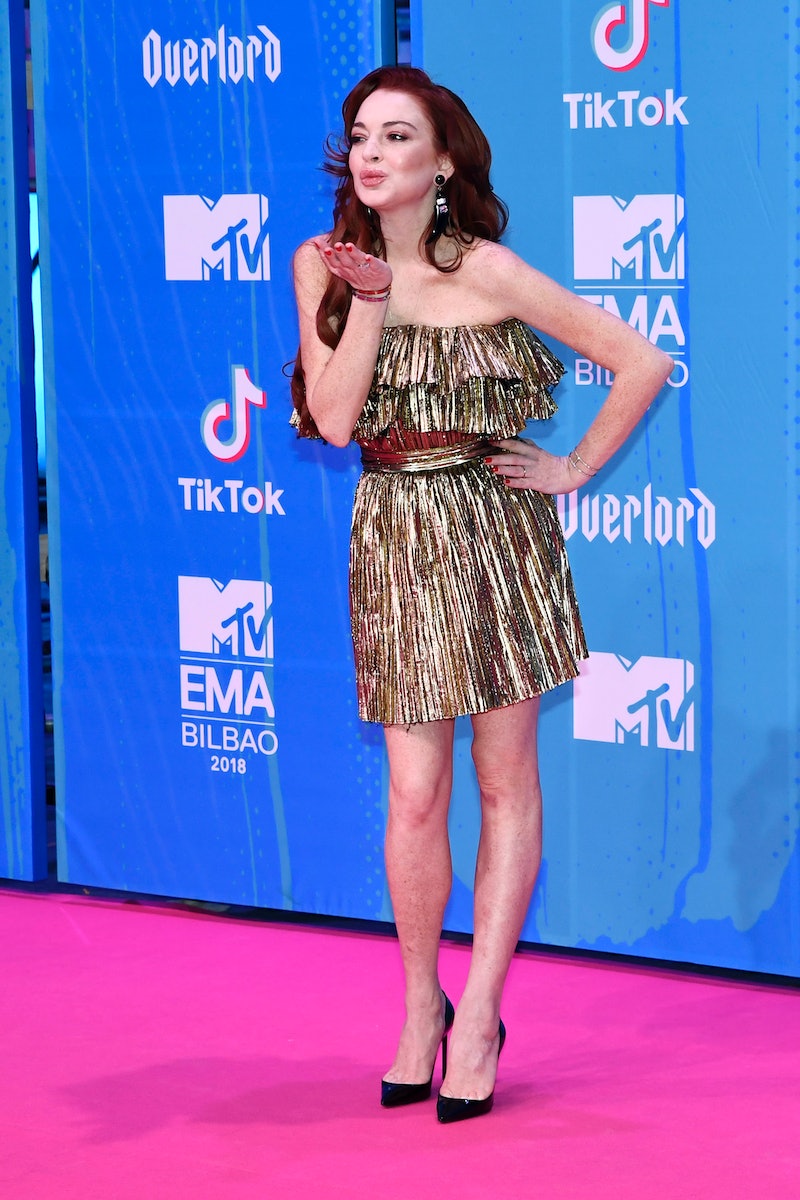 Lilo has taken to Instagram to let the world know how she feels about the “Thank U, Next” music video. As opposed to something you might find in the Plastic's Burn Book, Lindsay Lohan’s response to Ariana Grande’s Mean Girls tribute sure is a positive one. She's flattered, *Karen Smith voice* duh. Oh, and she also said no one can Lilo like Lilo, and… she is not wrong?

“Behind the scenes 🎬 ain't nobody Lindsay Lohan like the real Lindsay Lohan. But so flattered by @arianagrande loving #MeanGirls so much! Also, I love #dynasty”

Perhaps you've been stuck underneath a pile of Kalteen bars for the last couple of weeks and do not understand why Lilo was moved to comment on Grande, Mean Girls, and the CW reboot of Dynasty on Tuesday morning. (Hey, it happens to the best of us.) If that is the case, it is time to get brought up to speed.

Grande recently filmed a video for "Thank U, Next," the first single off of her to-be-released fifth album. Though she has yet to share the official vid, she has spilled the concept: The forthcoming music video references Legally Blonde, Bring It On, 13 Going on 30, and Mean Girls, four iconic comedies that ruled the ‘00s. And *Karen Smith voice* duh, Lohan played the protagonist of Mean Girls, Cady Heron.

In anticipation of the music video's release, Grande has shared a bunch of pictures of the shoot, including some snapshots of the “Thank U, Next” Plastics. Grande is Regina George, Courtney Chipolone is Gretchen Wieners, Alexa Luria is Karen Smith, and Mean Girls actor Johnathan Bennett returns as Aaron Samuels. And Cady Heron, the role originated by Lilo back in 2004, has been assigned to Dynasty star Elizabeth Gillies. And that is why Lilo was moved to comment on Grande, Mean Girls, and the CW reboot of Dynasty.

The behind-the-scenes pic series is not the only thing Piggy Smallz's mom has given us to hold us over until the official video drops. On Monday, Grande gifted us with a teaser for the “Thank U, Next” music video that is — say it with me now — so fetch. A quick, albeit pitch-perfect homage to Mean Girls, the clip is based on the montage of North Shore High School students gossiping about the queenpin of the Plastics. In the “Thank U, Next” version, Mean Girls stars and friends of Grande repeat pieces of tittle-tattle they’ve heard about the pop star. Grande has warned us over and over again that this music video will honest to god knock us out, and the exquisite preview only supports her case. (But come on, it’s not like Ari’s ever given us reason to doubt her.)