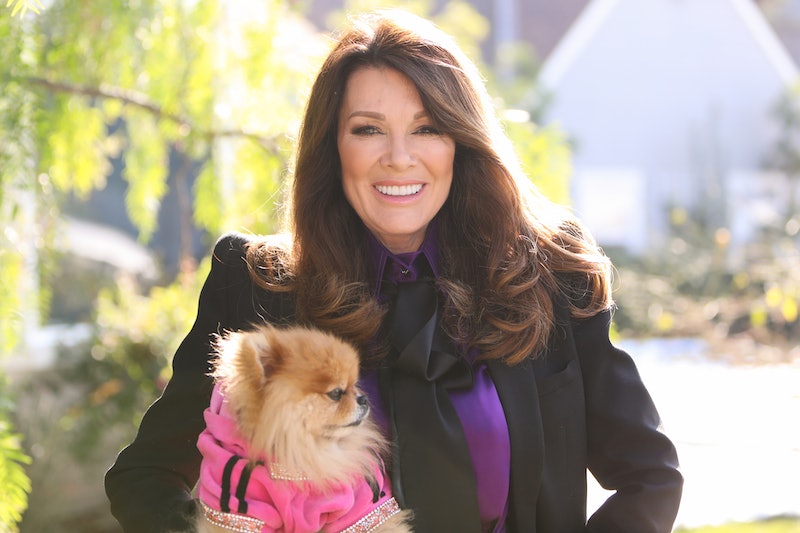 Lisa Vanderpump may have just left The Real Housewives of Beverly Hills after 2019's Season 9, but her mark on the show was so huge that it's left Bravo fans missing her presence already. But, Real Housewives fans might not have to miss her forever. Vanderpump is not ruling out a RHOBH return, as she said on Tuesday, Jan. 14, meaning Bravo fans can still have hope — for now.

While guest-hosting Entertainment Tonight, Vanderpump opened up about whether she'd ever appear on RHOBH in the future, and she didn't shut down the suggestion. “I can never say never about anything, but I don't know," she said, making it clear that it wouldn't be happening too soon. "It’s not what’s in my radar right now." After the tough time she had during Season 9 of the show, between her brother's death and the ridiculousness that was the Puppygate scandal, it's not that surprising that she isn't in a hurry to return. But her not saying the word "no" is great progress.

Understandably, she's also not keeping up with what's been happening on the show's first season since her exit. “I just hear a little about a hookup situation,” she said, likely referring to the allegations that former co-stars Brandi Glanville and Denise Richards had a secret affair. “But I haven’t heard much about it all. No comment on that one! I won't be [watching this season.]”

While RHOBH simply won't be the same without her, fans can still watch the reality star on her spin-off Vanderpump Rules, which just premiered its eighth season. And Vanderpump promises that it will be just as explosive as ever. “It's a very convoluted, complicated experience, and it has been for many years,” she said of the show's ever-entertaining cast. “So, they kind of struggle to grow up. A lot of the time they get it right, but equally they get it wrong this season. It’s very divided.”

She also said that this season would be even more emotional than usual on her part, as she had to deal with her mother's death in the middle of filming. “There was a definitely an emotional component in my life that factored into the show because we have to document everything that’s going on," she explained to ET. "I’ve been a bit emotionally vulnerable for the last 18 months because my family was literally cut in half.”

Between Vanderpump's journey and more uplifting moments like Stassi's engagement and Jax and Brittany's wedding, fans should have tissues on hand for basically every episode of VPR this season.

More like this
Which RHODubai Housewife Has The Biggest Net Worth?
By Hugh McIntyre
RHOA’s Kenya Moore Said Her Friendship With Marlo Hampton Is “Too Far Gone”
By Brad Witter
Taylor Armstrong Would “Definitely” Return To RHOBH After Her Season 3 Exit
By Brad Witter
‘RHOA’s Shereé Whitfield’s Boyfriend Tyrone Gilliams Hinted He’s Single
By Brad Witter
Get Even More From Bustle — Sign Up For The Newsletter