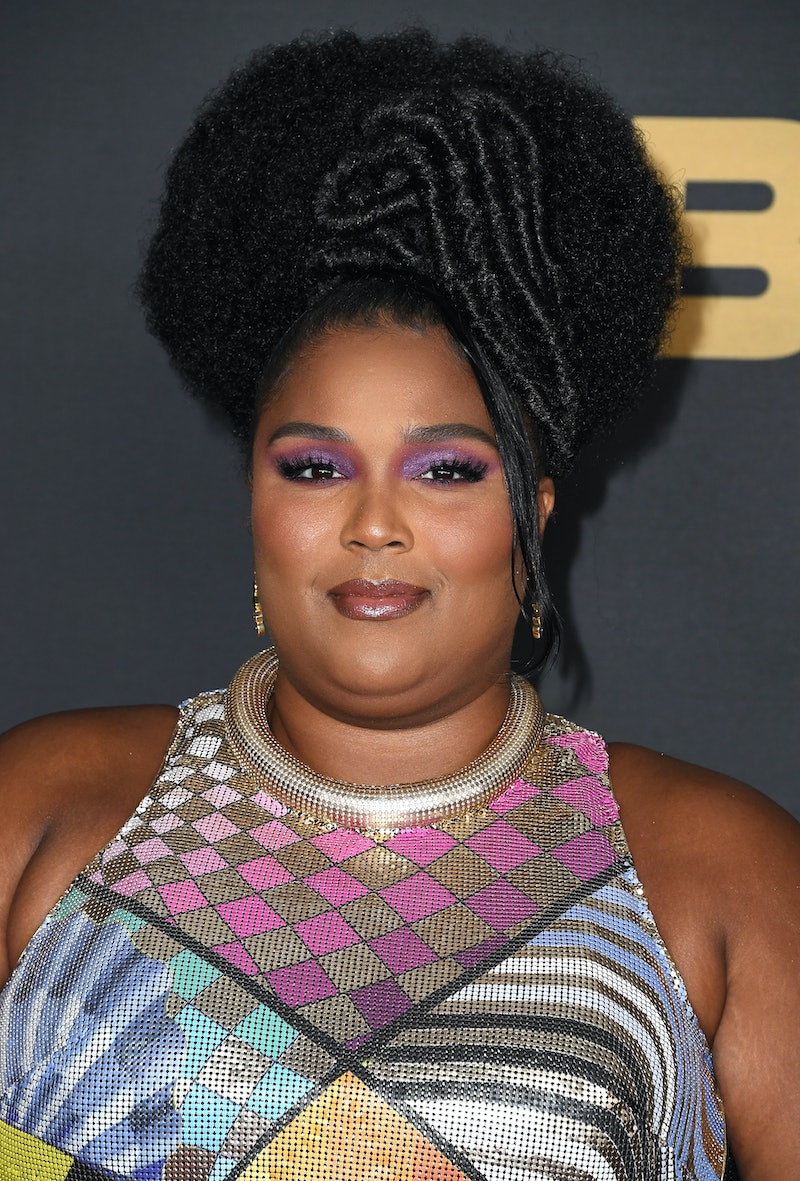 Never one to miss an opportunity to shine on the red carpet, Lizzo wore a custom dress at the NAACP Image Awards on Saturday, where she accepted the award for Entertainer of the Year. The dress, designed by Mary Katrantzou, featured a striking geometric pattern that included a beautiful detail that was easy to miss: it was printed with "Lizzo" in glitter text down the side. The "Truth Hurts" singer accessorized with a unique handbag made to look like a block of gold and matching gold jewelry, while her heels were from Smash Shoes, according to Insider.

The NAACP Image Awards is not the first time the singer has worn one of Katrantzou's designs. In Dec. of 2019, Lizzo posed in Katrantzou's "imagination cape" for TIME after being named the magazine's "Entertainer of the Year." In addition to being an optical illusion, the garment featured symbols of "alchemy, biology, theology, and philosophy," as per Insider. Katrantzou was excited to have Lizzo choose her cape, saying her team aims to, "design pieces that can be worn by any size, by any age, and by any gender" and that the singer's photoshoot was the, "best crystallization of our intention."

Katrantzou shared how happy she was that Lizzo chose to walk the red carpet in another one of her designs on Instagram. In a post featuring a photo of Lizzo wearing her custom gown, the designer wrote, "Queen @lizzobeeating attends the @naacpimageawards tonight wearing custom #marykatrantzou Styling by @brettalannelson Thank you for trusting me."

Lizzo appears to still be a big fan of Katrantzou as well, as she once again wore one of designer's geometric looks to attend the high-profile event. On Saturday, the singer was nominated for four NAACP Image Awards, having already won Outstanding Music Video or Visual Album for "Juice," as per Billboard.

During the ceremony, Lizzo took home "Entertainer of the Year" and used her speech to share an inspiring message. "I just want to shout out all the big black girls I bring onstage with me," she said. "I do that because I want them to know they are the trophies. Since this is the final award of the night, I don't even want to make it about me. Every last one of you: you are the award. We are so special. We are such a beautiful people."

She added that the award was meant to remind fans of their potential, stating, "This is just a reminder of all the incredible things that we can do. God bless you, and keep on being an award. Let's go."

The past couple years have featured career milestones for Lizzo, from her breakout single "Truth Hurts" going No.1 on the Billboard Hot 100 for a historic seven weeks, to making her movie debut in Hustlers. But the star is also becoming well-known for her show-stopping fashion, and her geometric gown for the NAACP Image Awards is not the only time her red-carpet looks have made headlines. On Feb. 18, Lizzo wore a chocolate-bar inspired dress for the Brit Awards, complete with a chocolate-bar shaped handbag. In August, the "Juice" singer's MTV VMAs sequined Moschino dress featured a unique touch — it was printed with the word "siren."

Lizzo picked a special gown to accept her award at the 51st NAACP Image Awards, and it's not likely to be the last time she makes a statement on the red carpet. Lizzo might be "Entertainer of the Year," but fans are sure to see more show-stopping looks in the future.

More like this
The 'Love, Lizzo' Harry Styles Scene Is Just 1 Moment That Made Fans Feel Seen
By Brad Witter
Twitter Can’t Get Enough Of Lewis Capaldi Creating Fashion Looks For ASOS
By El Hunt
Rita Ora’s Sheer Dress & Mermaid-Inspired Prosthetics Stun At British Fashion Awards
By Sophie McEvoy
Lizzo Is Here To Remind You That Hot Girl Summer Lasts All Year
By Dominique Norman
Get Even More From Bustle — Sign Up For The Newsletter