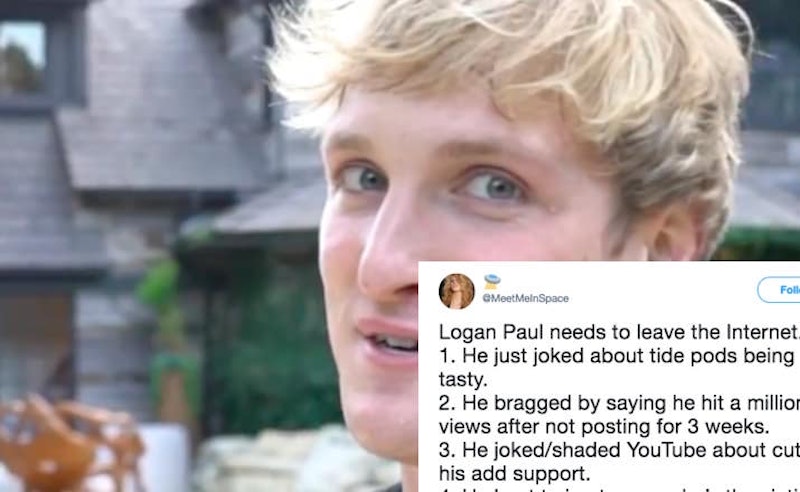 On Saturday, YouTuber Logan Paul posted a video to Twitter teasing a "comeback" for his popular YouTube channel — one that came today, along with the claim that Paul made 1 million new followers during the controversy that prompted his comeback.

Paul recently made headlines after the backlash from a video filmed in Japan's Aokigahara Forest, or "suicide forest," that showed the body of someone who had apparently died by suicide that was posted Dec. 31. The video was swiftly taken down, and social media users called on YouTube for Paul's removal from the site (YouTube did remove Paul from their Google Preferred platform). On Jan. 2, he issued a written apology and posted an apology video on Twitter saying he was taking a break from vlogging, the latter of which was criticized when viewers pointed out that he had profited off of the apology video (which Paul then demonitized in response). On Jan. 24, he posted a seven-minute video titled "Suicide: Be Here Tomorrow," in which he talks to people with depression and promotes outreach and mental health awareness. He also committed to donating $1 million to suicide prevention.

It seems that his break from vlogging is over, as he posted a new video on Feb. 4 titled "LOGAN PAUL IS BACK!." Already, though, it is strumming up controversy similar to the monetization of the apology video. The new vlog, which teases his return to YouTube similar to a parody movie trailer, describes him as a "legend," a "myth," and a "maverick." He says in the video, "Yo, hold up — 'disgraced'? Whatchu mean 'disgraced,' boy? I took a break. Besides, I'm still lit as f*ck. What other YouTuber you know can take a three-week break and still gain a million subscribers?"

Twitter users immediately expressed their distaste that Paul was, yet again, profiting off of a very serious incident.

Following the comeback video, which was posted Feb. 4, Paul posted a tweet reading, "swallowing 1 tide pod per retweet." As health experts have warned against the viral "Tide Pod Challenge" meme because of its potentially deadly consequences — the consumption of Tide pods, despite their clear warnings, has resulted in multiple deaths in both children and adults — users found the tweet to be inappropriate in the wake of his public apology for his video regarding suicide.

Also in the "LOGAN PAUL IS BACK!" video, Paul starts a pretend fight in his home, and encourages viewers to buy his merchandise, claiming that "YouTube cut my AdSense in half." In the 12-minute video, he does apologize for his actions in Japan: "I did go too hard in Japan. I was so excited ... and for that I apologize." He speaks about the abusive messages he has received from users in the past month, and says that will speak more about his social media "hiatus," but not in this most current blog.

Despite the hiatus, though, Paul's recent comment on rapper Cardi B's Instagram on Feb. 1 quickly went viral. Cardi B posted an image with a caption of the Kanye West lyric, “They trinna crucify me like they did Christ." Paul reportedly posted a comment reading, "Lawlz u tellin me." Within minutes, users were flooding the comments section with angry messages in response to Paul.

Paul, however, is seemingly unfazed by the backlash; he says in the comeback video uploaded on Feb. 4, "No matter how much hate... it's just noise to me." And then, later in the video: "Everything I do from this point on will be criticized. I'm a very polarizing person. ... My supporters are a special kind of person who function on a different wavelength to everybody else."