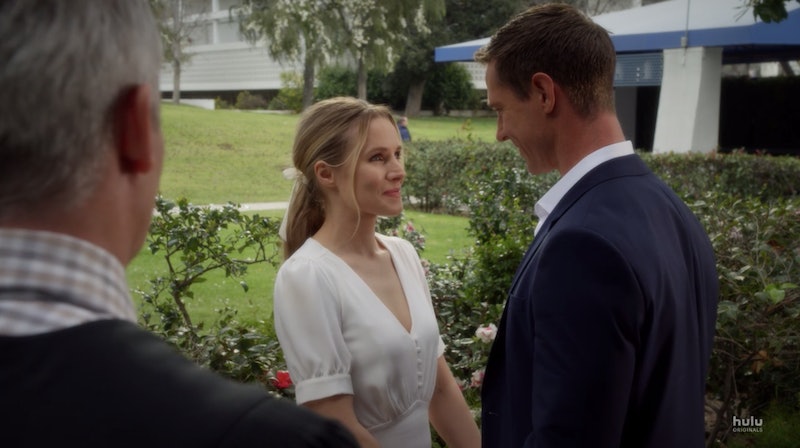 Spoilers ahead for Veronica Mars Season 4. Veronica Mars fans have been waiting for years to see Logan and Veronica ride off into the sunset together — or, at the very least, off to Sedona together. And while the new episodes may have left most Marshmallows devastated, Logan and Veronica's wedding in the Season 4 finale is just as wonderful and heartbreaking as you could imagine.

As fans would expect from an episode titled, "Years, Continents, Bloodshed," one of the biggest developments in the the Veronica Mars finale was Veronica (Kristen Bell) finally agreeing to marry Logan (Jason Dohring), and the pair tying the knot at the County Clerk's Office in an adorable, intimate ceremony attended by her father and Wallace (Percy Daggs III). The title is a reference to perhaps the show's most famous bit of dialogue from Season 2, in which Logan describes their on-again, off-again romance as "epic. ... Spanning years, and continents. Lives ruined and bloodshed. Epic! But summer's almost here, and we won't see each other at all. And then you'll leave town, and then ... it's over."

And while it might not have happened the way LoVe fans were hoping, Logan and Veronica's relationship truly lived up to that description: they got back together at the end of the 2014 Veronica Mars movie, survived countless criminals and the stress of Logan being sent around the world by the Navy, and — thanks to Patton Oswalt's delivery guy-turned-criminal — it sadly ended with lots of bloodshed.

The pair's wedding also highlighted how far the pair have come since they first fell in love as teenagers; Logan ran into his ex-girlfriend, and it simply reaffirms his desire to marry her rather than tempting him to back out. When he's late for the wedding, and Veronica and Wallace think he's leaving her at the altar, Logan and Veronica are able to calmly talk about what happened, rather than letting their emotions and anger run away with them.

Considering Veronica goaded him into a physical outburst early on in Season 4, it shows a great deal of maturity and growth for them to be able to simply talk it out and move on. And as sweet and simple as the wedding is, it still feels perfect for LoVe shippers — with Veronica even saying "Yeah, why not," instead of the traditional "I do."

As sweet and perfect as the wedding was, it seemed to hint at Logan's tragic fate — Veronica jokes that happiness is a "foreign sensation" for her, right before she gets Logan's text that makes her think he's not coming. Similarly, the pair only get to enjoy married life for an hour before the bomb Penn planted goes off, ruining their honeymoon and killing Logan. It might not seem possible to make Logan's sudden death any more heartbreaking, but seeing Veronica finally feel like she might get to experience normality and happiness for once, only to have that ripped away from her — twice — makes the scene even harder to rewatch.

Marshmallows everywhere were heartbroken when Logan was killed off shortly after finally tying the knot with Veronica, but at least the pair's sweet, full-circle wedding seemed to prove that the pair truly did have an epic romance. And considering the fact that Veronica is still wearing her wedding rings at the end of the finale, at least LoVe shippers can take comfort in the fact that their love did indeed span years, continents, bloodshed and even death.

More like this
This 'Gossip Girl' Wardrobe Error Has Gone Viral On TikTok
By Alyssa Lapid
Rupert Grint Just Shared A *Major* Update About Ron Weasley’s Future
By El Hunt
Netflix Shut Down 'Bridgerton' S3 Rumours About A “Very Dark” Storyline
By Bustle
'The Last Of Us' Has Officially Been Renewed For Season 2
By Darshita Goyal
Get Even More From Bustle — Sign Up For The Newsletter
From hair trends to relationship advice, our daily newsletter has everything you need to sound like a person who’s on TikTok, even if you aren’t.