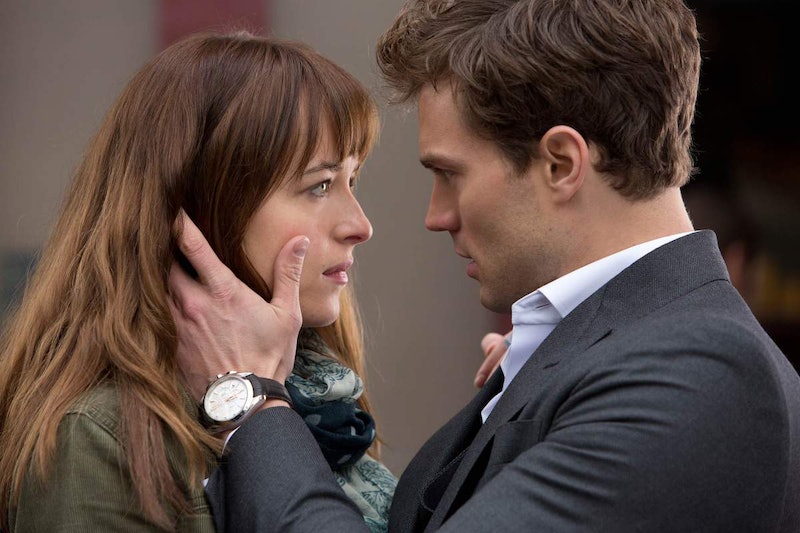 Don't try this at home, folks. There are couples in need of rescue after reading Fifty Shades of Grey inspired them to try out a variety of sex toys they weren't quite ready for, including penis rings and handcuffs. The rash of incidents is so serious that the London Fire Brigade has issued an official warning.

E.L. James' Fifty Shades of Grey outsold the Harry Potter series after its release, proving that fanfiction can, in fact, make money. Following a rocky start, trilogy of film adaptations is still in the works, with the second installment, Fifty Shades Darker, in theaters now. The London Fire Brigade says that, "as the second Fifty Shades of Grey film hits cinemas [it is] once again warning about people being stuck or trapped in objects as penis ring removals soar." According to a press release, the fire service has been called to remove nine penis rings from some very unfortunate men since April 2016 — "the same number as the previous two financial years ... combined."

So what does the London Fire Brigade recommend for folks who want to get kinky this Valentine's Day? Director of Operations Dave Brown says, "Our advice is simple: If the ring doesn't fit, don't force it on."

More like this
The 'Lady Chatterley's Lover' Book Leaves Us With A Troubling Question
By Catharina Cheung
'Bridgerton' S3 Teases Exciting Social Season For Penelope Featherington
By Bustle
You Definitely Know The Voice Of Shuri's AI In 'Black Panther: Wakanda Forever'
By Brad Witter
This James Bond Event At Abbey Road Studios Was A 007 Fan's Dream
By Samantha Rollins
Get Even More From Bustle — Sign Up For The Newsletter