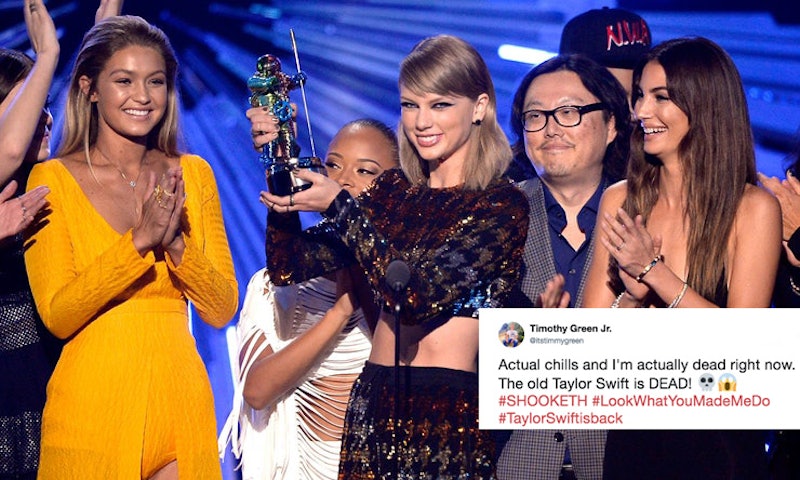 Taylor Swift has been the internet's personal punching bag basically since her career began, though for different reasons over the years. So, it's no surprise that Twitter's reaction to Swift's "Look At What You Made Me Do" comes in the form of memes and tweets that are positive, negative, and, in some cases, downright hilarious. Honestly, did you expect anything less?

This song is the first off Swift's upcoming album Reputation, which is set for a Nov. 10 release. Even when the album was announced on Wednesday, Aug. 23, the internet chatter was instantaneous, whether joking about the newspaper print on Swift's album cover or comparing the font to Ashlee Simpson's I Am Me album. Basically, the singer can't do anything without starting a conversation. It really is no surprise then that she's trying to reclaim her reputation.

If this is how Twitter reacts to Swift's first single, you can bet there will be even more of a response when the music video arrives. Oh, and when once the full album hits airwaves? Yup, the meme-ing will be never-ending. And there's no better way to pass the time 'til Swift's new album is officially here than LOL-ing at with the best memes and tweets in the meantime.

1. Your Reaction To THAT Line

This image is all of us.

I take it back. This gif is all of us.

3. No Truer Image Than This

Don't lie, this is what you're doing.

4. The Fandom Is Shook

Apparently, Swift isn't the only one who died Thursday night.

We hardly knew her. Or maybe we knew her all too well.

9. Can You Believe We Never Noticed?

And yet right now it seems so true...

More obituaries need to be written.

Swift came for the internet and she has slayed those who stayed up for it utterly — at least on Twitter, anyway.