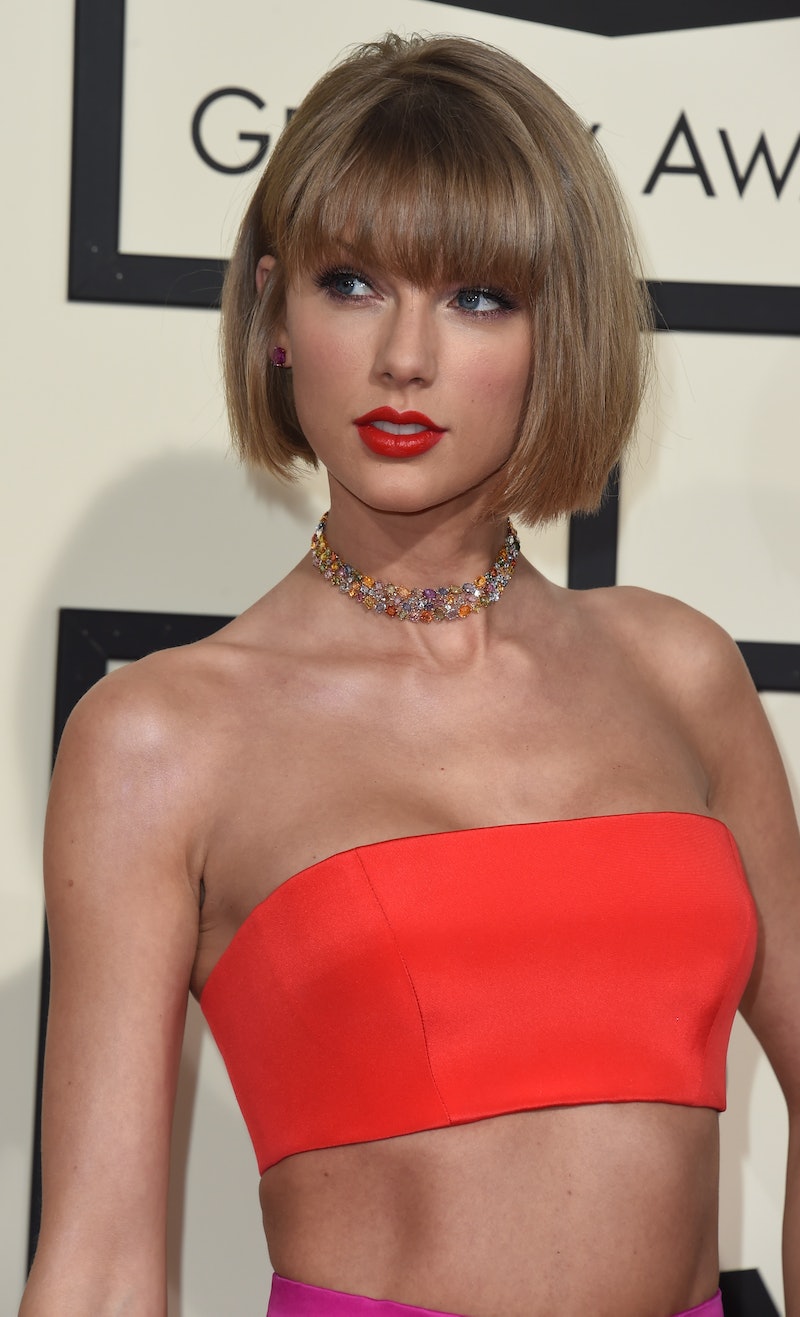 While she's been quiet for the last few months, the announcement of Taylor Swift's new album, Reputation, makes it seems like the singer is ready to address all the headlines she's spurred since 1989. But, for some fans, the album announcement comes too soon after her sexual harassment trial, in which she was awarded a "symbolic" $1 from DJ David Mueller — so soon that some have questioned whether she's an opportunist using the good press from the trial to sell an album. It's true that the timing of her music announcement is pretty perfect, but, then again, Swift has never shied away from using her personal life for musical inspiration. The difference might be, this time, she's going to explicitly tell her story without caring what you think. And whether you approve of the timing or not, it's her story to tell.

Of course, it's too early to say whether or not Swift will actually make mention of the trial, in which she accused Mueller of grabbing under her skirt during a 2013 concert meet-and-greet. (Mueller has denied the incident occurred and is the one who initially sued Swift for defamation.) On top of that, Swift's been working on her new album for months — way before the trial even took place. And yes, that's a trial where the court decides on the date, not Swift. Not to mention, an album announcement for someone of Swift's caliber takes a lot longer than a week, making it hard to believe she's simply piggybacking off positive press she recently received.

It's more likely that the album might address her ongoing Katy Perry feud, or the Kim Kardashian and Kanye West narrative she'd like to be "excluded from." After all, snakes were a big part of the whole Swift and Kimye "Famous" fiasco — and she's posted several snake videos to hype up the album release. The new music could touch on the many, many headlines she's inspired over the last few years, from Hiddleswift to her deafening silence during the 2016 election. It could even just be about Swift's love/hate relationship with the media in general. Some have even joked on Twitter that this is her "fake news" album, in which, like President Donald Trump, she'll go after the media's portrayal of her.

But this is purely speculation. It's still too early to say what Swift's latest album is — or isn't — about, since we only have a title and a November release date. That's why fans and non-fans alike shouldn't get too caught up in the timing of this album.

Sure, this announcement comes just nine days after Mueller was found guilty of assault and battery, but there's nothing wrong with Swift's desire to return to the public eye right now. Especially since, whether Reputation makes mention of the case or not, it could be a positive thing for other survivors to see the singer out there moving forward.

After all, since Swift's case, more sexual assault victims are reportedly speaking out. The Rape, Abuse & Incest National Network, or RAINN, told ABC that its national hotline saw a 35 percent increase in calls the Friday to Monday after Swift’s trial. RAINN's president Scott Berkowitz said that Swift's testimony was "a great demonstration to other victims that there is strength in coming forward and pursuing justice." Promoting an album would give her even more opportunity to speak out about this issue, and I'm sure I'm not the only one who hopes she will — especially after reading her testimony in the case.

Swift hasn't done any interviews or shared much on social media while recording this album in Nashville — E! reported in May that Swift went four months without being photographed — which means the trial was one of the first times we'd heard from her in a long time. It was refreshing, because this was unlike the Swift we'd come to know.

This Swift was defiant, brazen even. “I’m not going to allow you or your client make me feel in any way that this is my fault," she told the court. "Here we are years later, and I’m being blamed for the unfortunate events of his life that are the product of his decisions — not mine.” (As mentioned above, Mueller initially sued Swift claiming she got him fired from his job as a radio DJ in Denver, though his case was later dismissed.)

If her music takes that same bold stance, it would mark a new direction for Swift, who has been criticized for "playing the victim" throughout her career. She's been called out for worrying a little too much about being "likable," or, as BuzzFeed's Anne Helen Petersen put it, created "an incredibly savvy image maintenance strategy" that had her looking to be everything to everyone while not standing for much of anything.

For example, Swift has been accused of using feminism to upgrade her brand and it's hard not to see why. Swift embraced feminism in 2015 as a badge of honor when it seemed like that was what all the female singers were doing, explaining in Maxim,

"Misogyny is ingrained in people from the time they are born. So to me, feminism is probably the most important movement that you could embrace, because it's just basically another word for equality."

(In 2012, Swift tried to side-step the feminism question, telling The Daily Beast, "I don't really think about things as guys versus girls. I was raised by parents who brought me up to think if you work as hard as guys, you can go far in life.")

It was all a little hypocritical, though, since Swift touted the importance of female friendship, posting photos of her and her squad, while still going after other women like Perry in her songs. Earlier this year, The Daily Beast went as far to call Swift's particular brand of feminism "spineless" after she tweeted about the Women's March, but didn't actually show up to it.

But Swift was anything but spineless when she told the court that no one else saw Mueller grab her bottom because “the only person who would have a direct eye line is someone laying underneath my skirt and we didn’t have anyone positioned there." More importantly, that whole testimony makes you wonder why Swift hasn't shown this side sooner — someone who's unafraid to say what's on her mind; maybe even someone willing to take a look inward at who she was and who she's become.

Bustle's Rachel Simon hopes Swift's Reputation is her apology album, but I hope her latest release marks the IDGAF era of her music. That's something I think fans, apologists, and haters alike would be interested in hearing. It's a chance for her to stop caring so much about what others think of her and get real — reputation finally be damned.