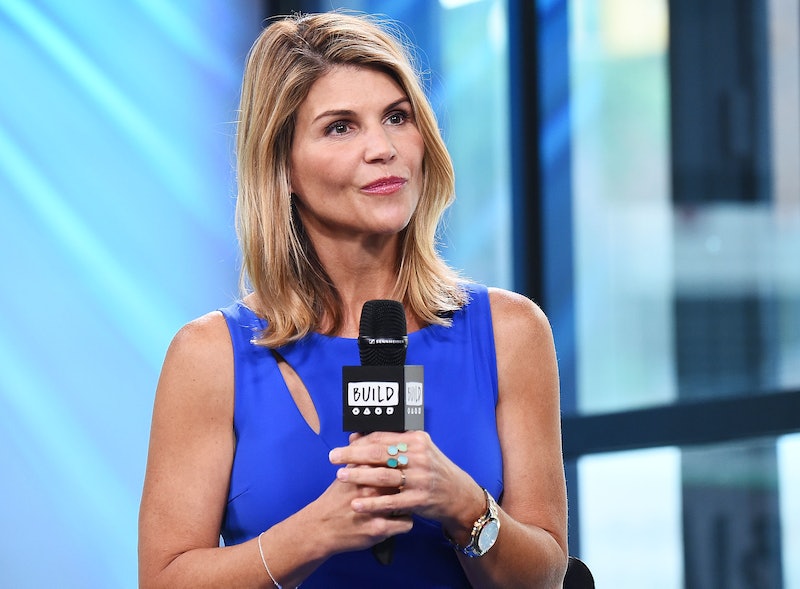 Following the college admissions scandal that's taken over headlines this week, Lori Loughlin's daughters are reportedly leaving USC, according to a report from TMZ on Thursday. The Full House actor and her husband, Mossimo Giannulli, face charges in the scandal, after allegedly paying $500,000 to have the two students involved in an athletic recruitment scam. According to USA Today, Loughlin was arrested earlier this week and has since been released from custody. (Bustle reached out to Loughlin’s rep, who had "no information at this time" about the reports about the daughters leaving USC.)

USA Today reported that Loughlin and Giannulli allegedly paid money to have their daughters recruited to USC's crew team, even though they weren't actually involved in crew. Now, it sounds like their daughters, Olivia Jade and Isabella Giannulli, won't be going back to the university at all.

According to TMZ, the two sisters aren't planning to apply to different colleges, at least not yet. Instead, Isabella and Olivia Jade will "lay low" following the scandal. The publication reported that sources believe the Giannulli sisters would be "viciously bullied" if they were to return to campus after news of the admissions scam broke.

Following the family's allegations, Loughlin deleted her social media accounts on Tuesday. At the time of reporting, Olivia Jade's Instagram account is still active, but she hasn't posted since Feb. 28, and the comments are turned off. The Cut reported that Olivia Jade lost some of her Instagram sponsorships due to the reports, including with Sephora and TRESemmé.

Loughlin and Giannulli were far from the only people involved in this scandal. Fifty people were charged in the alleged scam, according to the New York Times. Felicity Huffman was also arrested in connection to the scam, but her husband, William H. Macy, wasn't charged, per People. Other people arrested in connection with the admissions scam included college coaches, an exam proctor, and administrators for the SAT and ACT.

Some of the other colleges whose admissions were affected by the scandal include Yale University, the University of California - Los Angeles, the University of Texas, and Stanford University, as E! News reported. Loughlin, for her part, was charged with "conspiracy to commit mail fraud and honest services mail fraud," according to CNN. Her bond had been set at $1 million.

CBS Local reported that Olivia Jade was in her first year at USC before leaving the university this week. It's not clear what classes she was taking at the school, although she did post in an August 2018 YouTube video that she didn't "really care about school." "I do want the experience of game days, partying. I don't really care about school, as you guys know," Olivia Jade told her YouTube followers in the clip. She later issued an apology for the statement, calling her original choice of words "super ignorant and stupid."

It's still not clear how much Olivia Jade and her sister knew about the admissions scandal before the news broke this week, but their reported withdrawal from the university does appear to be in response to the whole situation.