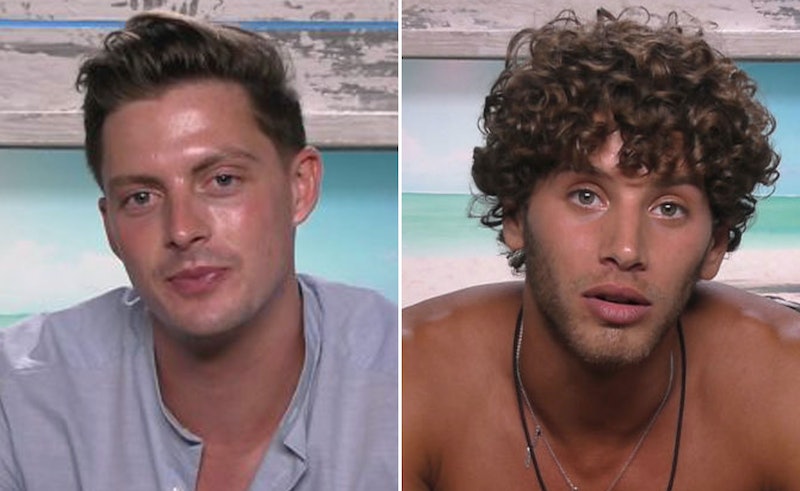 A very famous wizard once said, "It takes a great deal of bravery to stand up to our enemies, but just as much to stand up to our friends," and that's exactly what happened during Thursday night's episode of Love Island. In a moment that fans have been waiting for, junior doctor Alex George finally gave Eyal Booker a stern talking to and it was pretty damn glorious. And the Love Island memes about Alex standing up to Eyal that followed were even better.

But re-wind, what actually caused these two to fall out in the first place?The seeds of this IRL spat were planted earlier this week, as both Alex and Eyal battled for the affections of new arrival Megan Barton Hanson. Despite confessing to fancying Alex one minute, she was kissing Eyal the next, turning the pair into unexpected love rivals. However, when it came to re-coupling, Megan chose Eyal. Alex was left pretty gutted by her decision. Well, he was until she later hinted that he may still have a chance after all.

In a twist no one saw coming, Megan admitted that she would be jealous if another girl came into the villa and claimed Alex. "Have I made the right decision?" she said in the Beach Hut. "[Alex] is really good looking and such a nice person."

Rumours that Alex and Megan could still be on the cards then began to spread through the villa like wildfire. After catching wind of the murmurs. Adam Collard and Charlie Frederick decided to take it upon themselves to give Alex a real shot at wooing Megan back into his arms and, thus, Operation Doctor Do More was born.

The mastermind project saw Adam and Charlie calling Eyal for a chat, providing Alex with the perfect opportunity to finally speak with Megan one-to-one. Of course, the mission was a total success. Alex was back in the game.

Despite Eyal remaining oblivious to such goings on at the time, Thursday night's episode saw him finally discover what Alex and Operation Doctor Do More co-conspirators Adam and Charlie were up to, and he wasn't best pleased and headed straight to the Beach Hut to vent. "I just feel like Alex owed it to me to come and speak to me," he moaned. "He’s just gone behind my back and not given me the opportunity to have my moments with her, you know. He owes me the respect to come and say it to me before he goes and does it."

Unable to move past his frustrations, Eyal later pulled Alex to one side for a chat to make his feelings crystal clear, but — brilliantly — Alex was having none of it. In fact, he pretty much told Eyal where to go.

"You’re not letting me speak, you’re not having a conversation, you’re just getting angry," the doctor retorted. "I feel that in the last 24 hours, you’ve put pressure on quite a few situations. I don’t feel that you gave me the space to talk to her, so I’ve gone and had a conversation with her."

How did viewers on social media react to Alex serving up some home truths to Eyal (aka the Love Island snake)? Well, they were chuffed Alex was finally sticking up for himself and the beautiful moment inspired some of the best memes Twitter has ever seen:

Alas, after Eyal found out the truth about Operation Doctor Do More — courtesy of his coupling partner and the villa's new snitch Megan — he wasn't reflecting quite so fondly on any of his fellow male islanders. Furious, he then actually rounded them up for a telling off, only to be immediately dismissed by Alex once again because you know, he's a top dog now.

"Re-coupling doesn’t mean you’re in a relationship," Alex explained. "It’s honestly just a situation where you’ve chosen someone to spend more time with. Exactly as you’ve said from the start. You said that yourself."

More like this
A Full Debrief Of Who Follows Who From Love Island – & Who Doesn’t
By Shahed Ezaydi
The Love Island 2022 Reunion Drama, Explained
By Sophie McEvoy
Ekin-Su & Davide’s Next Move Is Confirmed & Involves *A Lot* Of Travel
By El Hunt
7 Cracking Quotes From 'Love Island' 2022
By Frances Stewart
Get The Very Best Of Bustle/UK