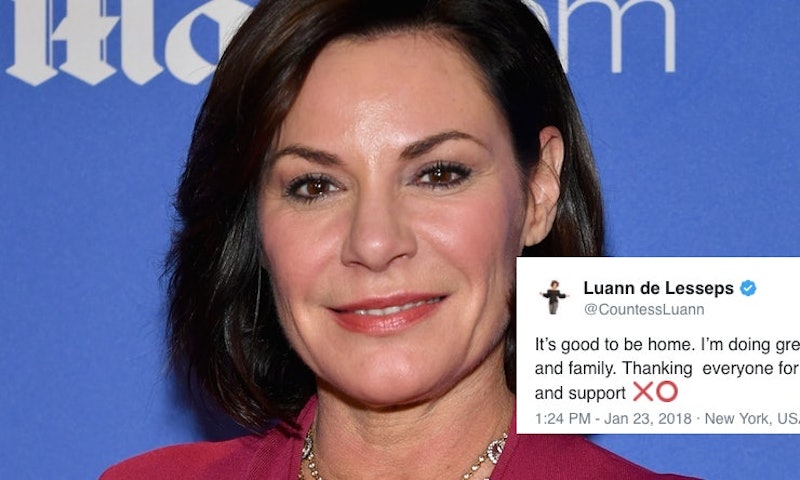 Back at home and seemingly in good spirits, Luann de Lesseps is receiving some major support from her Real Housewives of New York castmates following her recent stint in an alcohol treatment facility. Appearing to be extremely grateful for the outpouring of love she's gotten from family, friends, and fans alike, Luann announced her return to NYC and thanked everyone for their well wishes via Twitter on Tuesday, Jan. 23. Her tweet, which read, "It’s good to be home. I’m doing great. Spending time with friends and family. Thanking everyone for your continued good wishes and support,” marked Luann's first social media post since her announcement that she was voluntarily entering into a rehab program.

In celebration of Luann's return to the Big Apple, Ramona Singer also shared and quickly deleted a photo of a group gathering which included Bethenny Frankel, Carole Radziwill, Dorinda Medley, Tinsley Mortimer, Sonja Morgan, and Luann sitting at the head of the table, presumably serving as the guest of honor. “The gang’s all here! #reunited,” Ramona captioned the since-deleted photo, according to Entertainment Tonight.

The RHONY women also showed a moment of solidarity by taking their very own faux mugshot photos during a bootcamp session at the NYC-based ConBody studio. While it's unclear whether or not Luann was on hand for the workout session, many of the ladies in the group took to Instagram to share their snapshots. Carole jokingly commenting under her photo, "Armed & Dangerous." along with the hashtags "#solidarity #dothetime #rhony #toosoon?"

Although it may not always be evident during their on-screen camera time, the ladies of RHONY actually seem to be a fairly tight-knit group, remaining wildly supportive of one another throughout the years. SkinnyGirl creator Bethenny recently revealed that she and Luann had been keeping in touch during her treatment process via text. Showing her staunch support for the Class with the Countess author, Frankel told E! earlier this month,

With sources for People indicating that Luann's arrest will be covered on the upcoming season of Real Housewives of New York, it's probably safe to say that cameras were also rolling during the group meetings following her treatment completion. E! News also revealed that Luann checked out of the Jupiter, FL facility on Sunday, Jan. 21 after 21 days of treatment and has resumed filming with her RHONY costars.

As a recap, Luann was arrested in Palm Beach on Dec. 24 and subsequently charged with alleged battery on a law enforcement officer, alleged resisting arrest with violence, alleged disorderly intoxication, and alleged corruption by threat, according to Us Weekly.

Released on her own recognizance that same day, she took immediate responsibility for her actions on Twitter, while also citing "buried emotions" stemming from her failed marriage to Tom D'Agostino as a trigger for her behavior. In a Dec. 24 tweet, she explained,

"I want to offer my most sincere apologies to anyone that I might have offended with my behavior. This was my first time in Palm Beach since my wedding and being here brought up buried emotions. I am committed to a transformative and hopeful 2018."

The highly publicized incident is what prompted the mother of two to seek professional treatment for alcohol abuse days later. During a Dec. 29 Twitter announcement, she again apologized for her actions and revealed that she would be entering into rehab.

With the difficulties of 2017 now behind her, it appears that Luann has wasted no time getting back into the swing of things with her fellow New York Housewives. There's no doubt that 2018 will be a much better year for the 52-year-old reality star and her family.