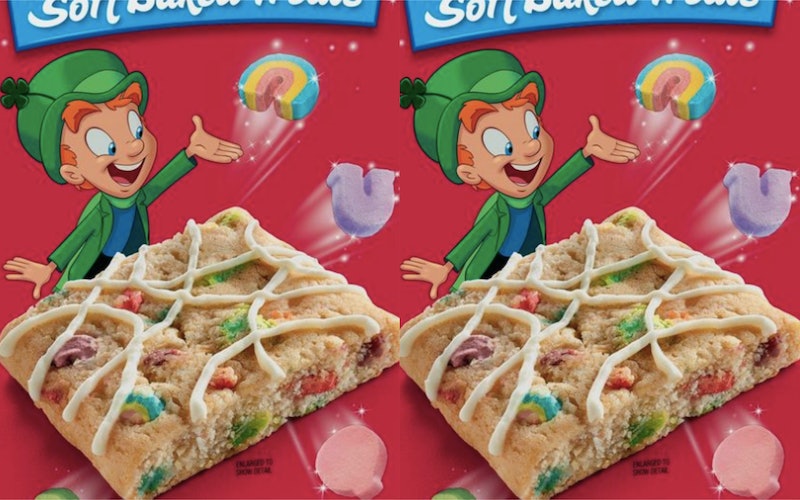 As someone whose only two distinguishable emotional states are "cake" and "looking for cake," I am pleased to inform you that yet another option has thrown itself at our cake-loving feet. Not only does it tick the beloved "cake" box, but it also appeals to your '90s kid sensibilities — General Mills has released Lucky Charms Soft Baked Treats, which are essentially mini cake bars stuffed to the gills with Lucky Charms marshmallows. The official flavor, per the box, is "Marshmallow Blondie," which I want every bit as much for my next stage name as I do for my mouth.

The new treat was recently brought to the internet's attention by popular food blog The Impulsive Buy, which chronicles all things new and delicious in grocery store aisles across the U.S. The bars were spotted and submitted by a user named Phil H., who found them in a Sam's Club. From the image shared on the post, and commentary from The Impulsive Buy, it does seem that these new treats strongly resemble Fiber One Bars — not all that shocking, seeing as they also come to us by way of General Mills — but they do seem to be marketed way more as a fun rainbow treat than its fibrous cousin.

Images of the new snack are also available on Instacart, confirming both its newness and existence. I attempted to search for other General Mills Soft Baked Treats to see if, say, the gods of dessert decided to gift us with a Reese's Puffs or Cinnamon Toast Crunch version of these, but so far it looks like these are the only new ones up to bat. While Sam's Club is probably a good bet for finding them, given the post on The Impulsive Buy, it seems that the treats are also on sale in 40-count boxes on Walmart and Amazon, but since there seem to be pretty large price differences on those options I'd maybe proceed with caution or attempt to find them in stores first.

If you're an eagle-eyed Lucky Charms fan, then you know that these Soft Baked Treats aren't the only way General Mills is remixing the popular fave — other offshoots include Lucky Charms Cereal Bars, which sell in boxes of eight. These stick a little more closely to the OG cereal, in that it is basically said cereal but held together by a layer of sugar, praise be to the Lucky Charms leprechaun.

Earlier in 2019, Lucky Charms also released a Fruity Lucky Charms box, because these marshmallows just don't know how to quit. As someone who regularly inhales these marshmallows without noting the taste I'm not entirely sure how this makes much of a difference, but I will take the leprechauns' word for it — and also keep my eyes peeled for the glorified cake bars that General Mills has dubbed "Soft Baked Treat," because if it doesn't scream "save me from falling asleep at my desk at 4 p.m.," then I truly do not know what does.