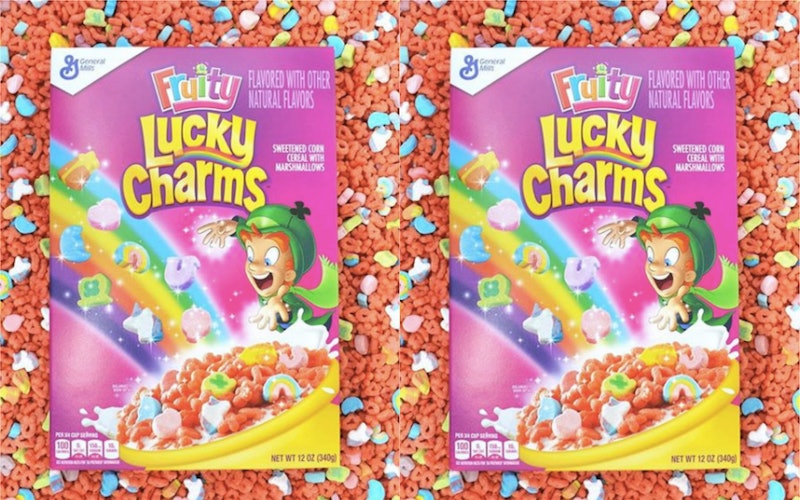 Lucky Charms have long been one of the top cereal choices for children and children-at-heart all around the world, mostly due to the fact that they're basically just an excuse to eat marshmallows — a legit candy — for breakfast. And, if you're someone with siblings, trying dominate the marshmallow-to-cereal ratio and leave them with nothing but actual food and no candy was probably one of the most brutal sports of your childhood. It's a seemingly perfect combination — something difficult to improve upon. Until now. Until Fruity Lucky Charms.

Fruity Lucky Charms take the traditional oat-y, grainy part of the cereal and fruits it up — meaning that there is no wastage to your tastebuds, no filler, just pure, unadulterated sweet and deliciousness. It's something that children and adults have longed for and, dare I say, something that could end the inter-sibling rivalry that has ravaged our country for generations. If you don't have to fight over the marshmallows in the Lucky Charms box, because everything is delicious, maybe household peace could actually be achieved once and for and all. Plus, they come in regular and family-sized boxes, seemingly ready to end family breakfast wars for the betterment of human kind.

General Mills announced the debut of Fruity Lucky Charms at the end of 2018, but many of us have had a problem locating them on supermarket shelves or even on places like Amazon, where you can seemingly find anything. In fact, a box of Fruity Lucky Charms currently costs anywhere between $10 and $18 on Amazon — clearly out of most children/candy lover's price range for a box of cereal, no matter how delicious. But good news, sweet toothers of the morning, because per snack food Instagrammer @markie_devo, Fruity Lucky Charms has now been spotted at Stop and Shop — which means that this sugary delight seems to be available to the masses.

The cereal was announced the same time General Mills announced that Cinnamon Toast Crunch Churros would now be A THING — and it definitely seems like breakfast cereal companies are upping their game. I mean, there was the Caticorn Cereal with genuine effing glitter in it. Chicken and Waffles Cereal seemed to test the limits of what foods could be put into cereal form (and nailed it, every step of the way). And you can even get Golden Girls Cereal for some reason known only to the makers of Golden Girls Cereal. There's no reason to skip breakfast when you get any flavor you could possibly want and have it distilled down into a cereal ready to pour milk on it — even Golden Girls flavor, apparently.

General Mills' news edition to the cereal game — especially the Fruity Lucky Charms — have definitely been highly anticipated, so it's great to see that they're hitting the mainstream shelves and available to the people. Some naysayers out there might point out that a cereal that is already half made up of marshmallows probably doesn't need any more sweetness, but those people can be at the back of the line when the sugary breakfast revolution arrives. For now, viva Fruity Lucky Charms — and may siblings rejoice in the fruit and marshmallow feasts that await them.