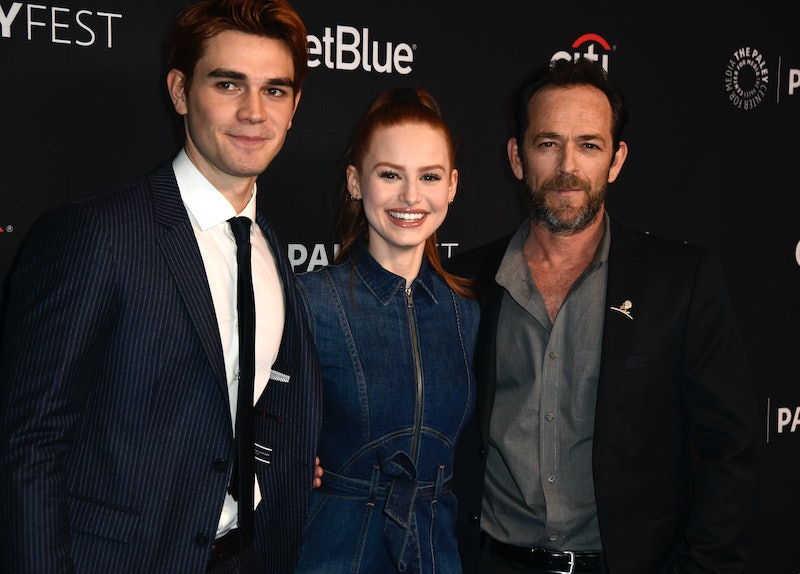 With Season 4 fast approaching, the Riverdale cast is continuing to share memories honoring their late co-star, Luke Perry. In a recent interview, Madelaine Petsch revealed what Luke Perry taught her during their time together on set. Speaking with Seventeen in their latest digital issue, published on Oct. 3, the actor, who stars as Cheryl Blossom on the show, opened up about working with Perry and how he still impacts her life.

"Luke was my oracle throughout Riverdale," Petsch said. "He was on [Beverly Hills, 90210] and had done all this work, so anytime I had any questions, he opened his door to me." Perry, of course, shot to fame in the '90s thanks to his role on a teen soap opera, making him the perfect person for the young Riverdale cast to go to for advice. "He was such a kind and loving soul, and he was so generous. He was the kind of actor that gave you everything when he worked with you," she added.

Petsch also noted that one thing Perry taught her was to always be "a bright light," because you never know who might need to be uplifted. Perry's advice hit close to home for Petsch, because, as she told Seventeen, whenever she needed "a bright light" in her life, Perry delivered.

This isn't the first time Petsch has called Perry her "light." After Perry died in March after suffering a stroke, the actor paid tribute to him on Instagram. "You were such a light in our lives; the most genuine & kind soul I will ever know. From day one of this show you were the most amazing mentor to me," she wrote. "Thank you for teaching me not only about this industry, but also about kindness and being a family and how to foster and nurture those important relationships… you were the absolute best at that."

Petch's words about Perry echo those of many of her Riverdale costars. During a Busy Tonight appearance in March, Cole Sprouse said about Perry, "In the 26 years I’ve been doing this, he’s the person I’ve never heard a bad thing said about, which is an incredibly impressive thing."

KJ Apa, who played Perry's onscreen son in The CW drama and formed quite the bond with the actor, told late-night host Jimmy Fallon that the two had a "really close relationship." He continued, saying, "It's not every day that you come across someone like Luke. Luke is the kind of person who did everything he can to make — no who you are, matter how big you are or how small you are — feel welcome." Camila Mendes also shared similar memories about Perry on Instagram in March. She shared a photo on Instagram, writing that the actor "took care of us all."

Now that Perry's gone, his Riverdale character, Fred Andrews, will be honored in the Season 4 premiere on Oct. 9. The episode will explain Fred's death and serve as a tribute to Perry. Even Shannen Doherty, Perry's longtime friend and Beverly Hills, 90210 co-star, will appear in the episode, to help his light shine on our screens once more.