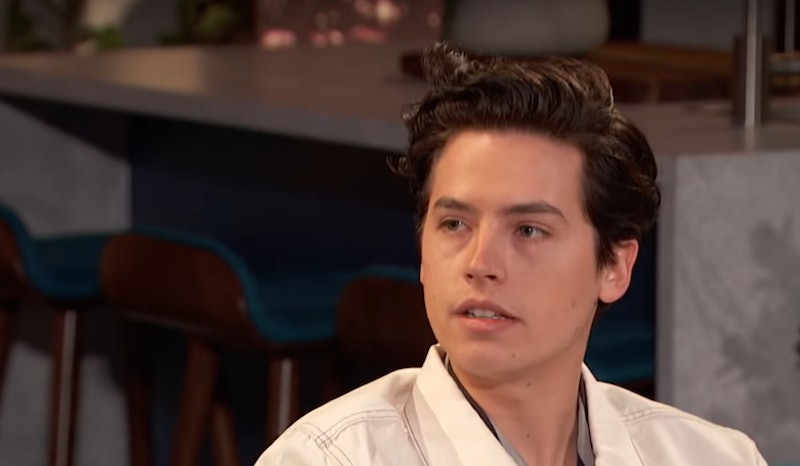 It's been a tough couple of weeks for the fans, friends, and family of one much-beloved star, who unexpectedly passed away at the age of 52. In speaking with Busy Philipps about his former Riverdale costar on a recent episode of Busy Tonight, Cole Sprouse's comments about the late Luke Perry further serve to prove that he was truly one of a kind.

On March 18, Sprouse and Haley Lu Richardson appeared on Philipps' show to promote their new movie, Five Feet Apart. During the end of their interview, the late-night host turned the conversation to Riverdale, which was renewed for a fourth season back in January.

"You're shooting Riverdale right now, you just flew in to do press, correct?" Philipps said, addressing Sprouse, who plays Jughead Jones on the CW's teen drama. "And obviously, it's been a really tough time for your cast because you lost a huge part of your family with Luke Perry's passing," she continued, as Sprouse nodded in agreement.

"By all accounts, he was just a wonderful person and like, a dad to everyone on set," the host went on. "Is there one thing that, you know, you learned from Luke that you'll like, sort of hold onto forever?"

"We were very close to him. In the 26 years I’ve been doing this, he’s the person I’ve never heard a bad thing said about, which is an incredibly impressive thing. He had this thing of speaking when he would get right here, close to your face, which would make you think you’d put your guard up but you let your guard down. He was so passionate about the way he spoke. Everything he talked about was a beautiful and passionate thing. We’re all going to miss him a lot."

This isn't the first time Sprouse has paid tribute to his late costar in recent weeks. When Perry passed away on March 4, Sprouse and Richardson were just beginning to do the promotional rounds for Five Feet Apart. During one interview on March 6, the Riverdale actor was asked how he and the rest of the cast were doing.

"We're recovering, yeah," Sprouse started, adding that it wasn't easy for him to discuss at that time. "But he was well-loved, and there's been an outpouring of emotional support from people around the world, which just goes to show what a wonderful person he was and how much he impacted people's lives, and impacted our lives."

Losing a loved one is never easy, but Sprouse has come off as particularly strong and well-spoken, given his current circumstances. He's been out there having to promote a pretty heavy film that directly deals with death — Five Feet Apart is about two teens (Sprouse and Richardson) who both have cystic fibrosis, which is a life-threatening illness — while also trying to cope with Perry's death IRL. That's a lot happening at once.

Sprouse has been the consummate professional, though, and continues to answer questions about tough stuff in a dignified way. Hopefully, he'll be able to take a break and find time to grieve in private sometime soon.