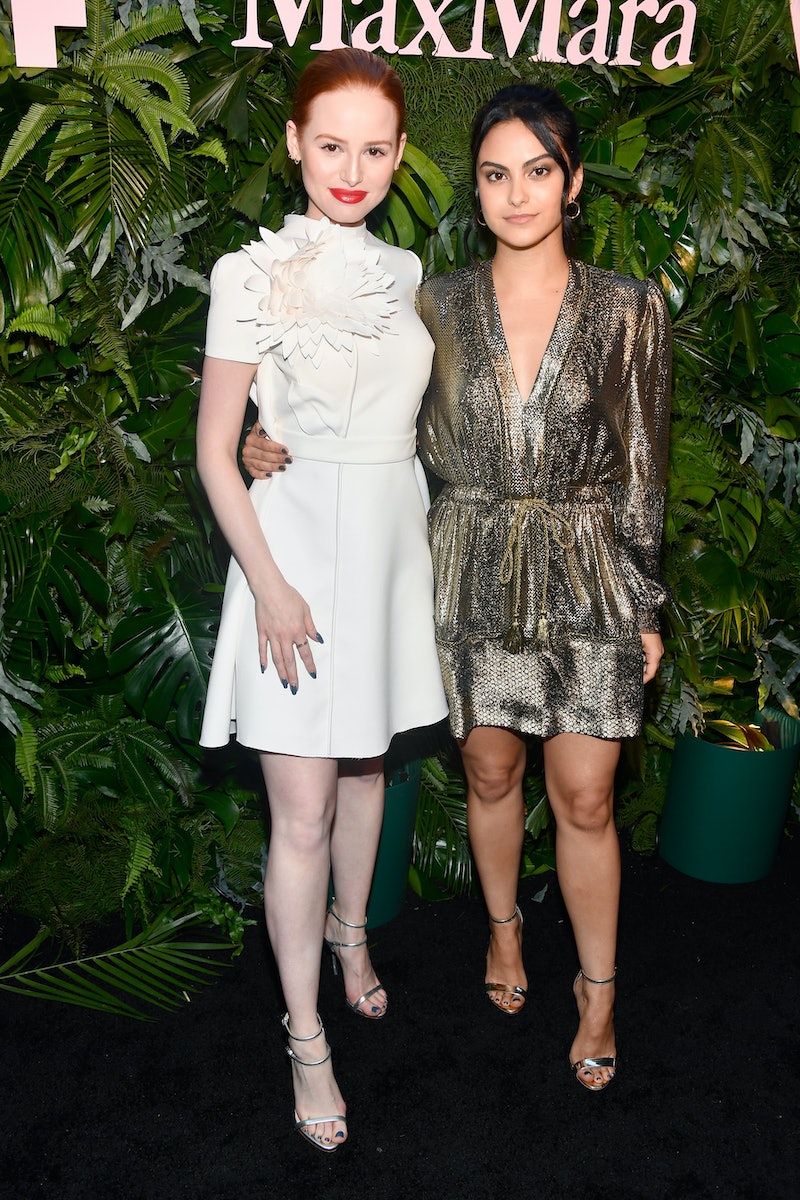 Over the last several days, countless stars have been sharing their sadness over the untimely death of a widely admired actor. Among the many mourners are Riverdale's Camila Mendes and Madelaine Petsch, whose tributes to Luke Perry, shared via Instagram, are a true testament to his kindness.

Less than a week after reportedly being hospitalized for a massive stroke, Perry died at the age of 52. As Dylan McKay on Beverly Hills, 90210, Perry quickly sky-rocketed to fame in the '90s, and his character's mysterious, bad-boy brood essentially transformed him into the epitome of "cool." Over the next few decades, Perry's career was filled with all kinds of memorable roles. Most recently, though, the actor became beloved to an entirely new generation of fans as Archie Andrews' father, Fred, on the CW's Riverdale.

Ever since Perry's death earlier this week, members of the Riverdale cast and crew have been sharing tons of heartfelt stories about all the different ways Perry positively impacted their lives. In addition to touching tributes on social media from showrunner Roberto Aguirre-Sacasa, Cole Sprouse (who plays Jughead Jones), and Lili Reinhart (Betty Cooper), both Mendes (Veronica Lodge) and Petsch (Cheryl Blossom) have now added their own memories of the actor to the mix.

On March 6, Petsch shared a photo on Instagram featuring herself, Perry, Mendes, Reinhart, Sprouse, and KJ Apa (Archie Andrews). "Luke, I am so lucky to have known you & gotten so close to you these last 3 years," her caption began. She then continued,

"You were such a light in our lives; the most genuine & kind soul I will ever know. From day one of this show you were the most amazing mentor to me. Thank you for teaching me not only about this industry, but also about kindness and being a family and how to foster and nurture those important relationships… you were the absolute best at that. I love you Luke, you and those sweet forehead kisses will forever be missed."

"my favorite photo," Mendes commented, and then shared her own love for Perry the following day. The snap that Mendes added to her Instagram was as equally endearing as her costar's. In what looks to be a candid moment, she and Perry — who had an adorable tiny party hat perched atop his head — are either in the midst of joyful conversation or in the middle of singing a song.

"he took care of us all," the actor wrote. "an authentic man who took pleasure in offering us his guidance and wisdom. his presence was healing; he had the ability to make you feel comfortable and at ease within seconds of seeing him."

Fair warning: You may need to have some tissues on-hand for this next part. Mendes' caption continued,

"i will never forget the collective shock and distress we experienced when the news broke on set. we lost a dear friend. my heart hurts for his family and anybody who had the pleasure of knowing him. rest in peace, luke. although you’re no longer around to wrap me in the warmth of your hug, i can still remember what it felt like. whenever i think of you, i will remember that feeling."

Perry's death is undeniably tragic, and has affected an innumerable amount of people — friends, fans, and costars, alike. While he will undoubtedly be missed, his memory will live on through the heartfelt stories of those who knew him best.

More like this
Who Is Camila Cabello Dating? She's Getting Cozy With Lox Club CEO Austin Kevitch
By Radhika Menon
Kim Kardashian’s “Gym Time” Video Features A Bikini & Thigh-High Boots
By Grace Wehniainen
Reese Witherspoon Got Hooked On ‘Never Have I Ever’ After Son Deacon’s Debut
By Stephanie Topacio Long
‘Stranger Things’ Stan Megan Thee Stallion Grilled Natalia Dyer About Nancy & Steve
By Brad Witter
Get Even More From Bustle — Sign Up For The Newsletter