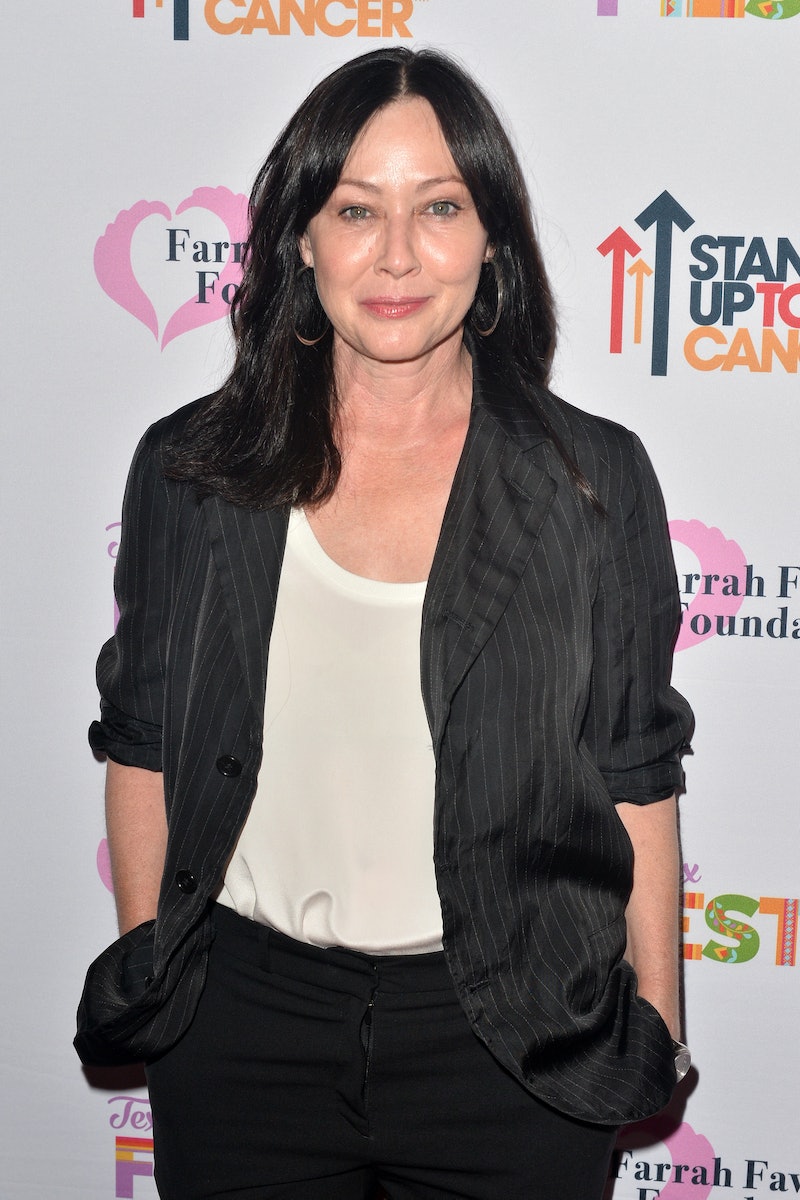 Luke Perry's longtime will friend and Beverly Hills, 90210 costar is about to deliver some devastating news to Riverdale. During the show's Season 4 premiere, Shannen Doherty's Riverdale character will reveal how Fred died, according to showrunner Roberto Aguirre-Sacasa. “She was there and she’s an unexpected source of comfort to Archie," he explained to Entertainment Weekly. "A big piece of what happened to Fred comes to Archie through Shannen’s character. The scene is so heartbreaking because you really feel Shannen’s love for Luke.”

EW also revealed the first look at Doherty‘s appearance in Riverdale's Oct. 9 episode, sharing a photo of an emotional moment between her character and Archie (KJ Apa), Veronica (Camila Mendes), Jughead (Cole Sprouse), and Betty (Lili Reinhart). Perry's Fred Andrews has been absent from the CW teen drama since the series' April 24 episode, with a subsequent installment simply referencing that Fred had gone out of town. Off screen, of course, Perry died on March 4 at age 52 from complications after suffering a massive stroke, as the actor's rep confirmed to Bustle at the time.

In his comments to EW, Aguirre-Sacasa shared that the days following Perry’s death were challenging for the close-knit cast and crew.

“It’s been really, really intense,” he added. “Luke and Fred were very similar guys. Everyone loved Fred. Everyone loved Luke. They were both salt of the earth. They were both generous and led with their heart. And it was really hard the days after Luke passed. I remember KJ took a break from filming and he went off and I sat with him and he said, ‘Gosh, Roberto, can you imagine if we were all as good people as Luke was?’ That sentiment really resonated and a similar sentiment is expressed in this first episode. Archie says to Veronica, ‘Imagine if we were all as good as my dad,’ and Veronica says, ‘You are.’ And it’s really cathartic.”

The showrunner first announced Doherty's Riverdale's tribute to Perry during the show's panel San Diego's 2019 Comic-Con in July. "They were such good friends, and when we were putting together this tribute episode, we wanted to make it as special as possible," he said. "And so we asked Shannen to do a pivotal, super-emotional role. She read the script and immediately said ‘Yes.’ It’s very impactful."

After the news broke, Doherty shared an Instagram photo of herself with Perry from their days as 90210's Brenda and Dylan, on July 21, along with the following caption: "I am deeply honored to pay tribute to Luke on Riverdale. The care in which this show takes in honoring his memory is beautiful. He is missed. Today. Tomorrow. Forever"

Aguirre-Sacasa had also previously addressed that Riverdale would explain Fred's absence in Season 4, rather than rushing a storyline prior to Season 3's finale in May. “That was a decision we made partly because when Luke passed it was such a shock, and we were so sad — we were so bereft — and we knew we had to address it some way, but we didn’t want to get it wrong,” he explained to Variety at the time. “It felt like trying to squeeze this in would have been a disservice.”

Instead, Fred's estranged wife, Mary Andrews (played by Molly Ringwald), stepped in to stay with Archie. Aguirre-Sacasa also revealed in the Variety interview that Ringwald offered to help out in any way that she could, and conversations immediately began about her character "having a bigger presence on the show next season.”

Either way, Apa said that Perry certainly will not be forgotten. "His legacy is gonna live on in the lives around him, that he worked with, you know?" he shared with Entertainment Tonight in April. "I'm never gonna forget him and I think it's still very fresh and we're all still dealing with it."

When Riverdale bids farewell to Fred — and Perry — during the season premiere, it seems safe to say there won't be a dry eye in sight.

More like this
'GoT' Star Emilia Clarke Says She "Just Can't" Watch 'House Of The Dragon'
By Brad Witter
The OG Power Rangers Are Returning For A Spandex-Clad Special
By El Hunt
'RHOP' Stars Robyn & Juan Reportedly Got Remarried & Filmed The Ceremony
By Brad Witter
Everything To Know About 'RHONJ' Season 13
By Brad Witter and Jake Viswanath
Get Even More From Bustle — Sign Up For The Newsletter
From hair trends to relationship advice, our daily newsletter has everything you need to sound like a person who’s on TikTok, even if you aren’t.