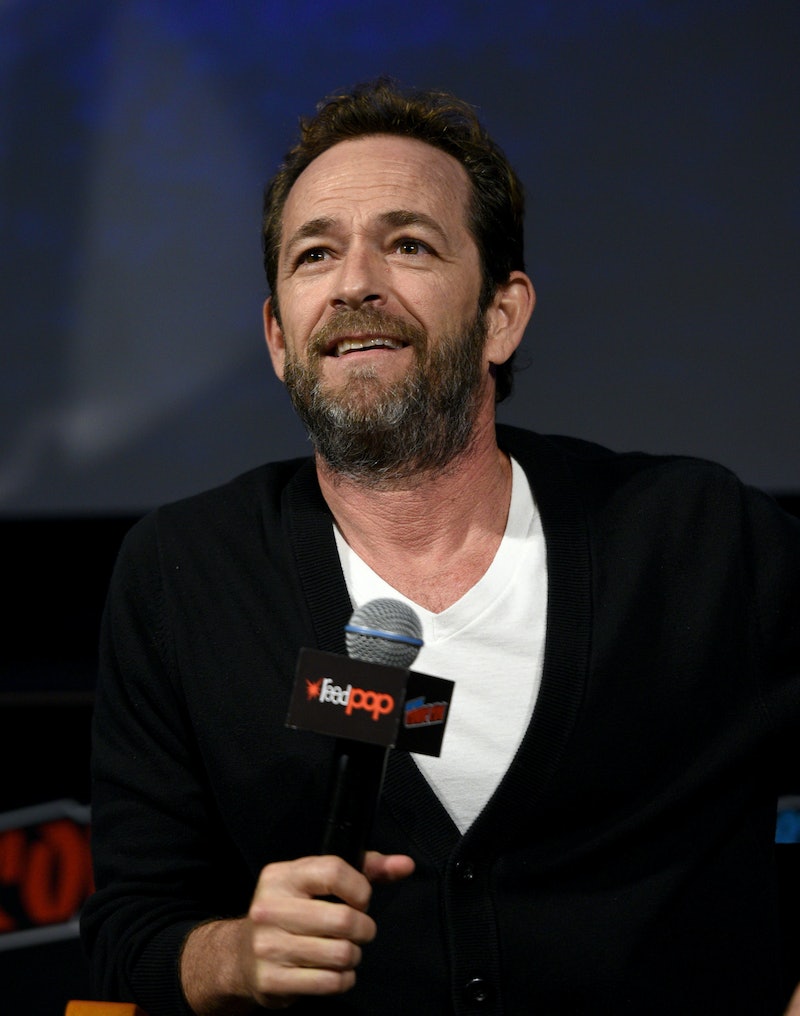 The outpouring of love for the late Luke Perry continues. On Saturday, Mar. 9, his fiancée, Wendy Madison Bauer, shared a moving statement about Perry's passing, according to People. Perry died on Monday at the age of 52. The star reportedly suffered a massive stroke, and was hospitalized on Feb. 27, but he never regained consciousness, as per People. The actor was best known for his iconic role as Dylan Mckay on Beverly Hills, 90210 and Archie Andrews father, Fred Andrews, on Riverdale. Following Perry's passing, many past and current costars, friends, family, and fans have shared positive memories. This includes the star's fiancée, who spoke out about the loss for the first time this weekend.

Bauer's statement discussed the love the couple had, and acknowledged all of the sentimental messages the star's friends and fans shared. "I want to express my gratitude to everyone for the outpouring of love and support," she wrote. "The countless, heartwarming stories of Luke's generosity and kindness have been a great source of solace during this difficult time." Bauer, who was the actor's longtime partner, went on to discuss her relationship with the star. The statement read:

"The past 11½ years with Luke were the happiest years of my life, and I am grateful to have had that time with him. I also want to thank his children, family, and friends for their love and support. We have found comfort in one another and in the knowledge that our lives were touched by an extraordinary man. He will be dearly missed."

Perry and Bauer did not discuss their relationship publicly, and it's unclear when the two got engaged. However, it seems clear from the longevity of the relationship that they were happy together. After news of Perry's death broke, his representative issued the following statement:

Bauer isn't the only member of Perry's family who has found comfort in all the love the actor has received in person and online. The star's daughter Sophie Perry posted a photo with Perry on Instagram, and also offered special thanks to friends and fans for sharing their memories of the actor. She wrote, "I made it back from Malawi just in time to be here with my family, And in the past 24 hours I have received an overwhelming amount of love and support. I cannot individually respond to the hundreds of beautiful and heartfelt messages, but I see them, and appreciate you all for sending positivity to my family and I."

It's clear that Perry's life and work was so meaningful to people around the world, and that his loved ones found the messages from friends and fans comforting during the difficult time. Bauer's words following Perry's passing show just how much the longtime couple cared for each other, and her moving message acknowledges the small sense of solace his family has received from the outpouring of love from the actor's fans.