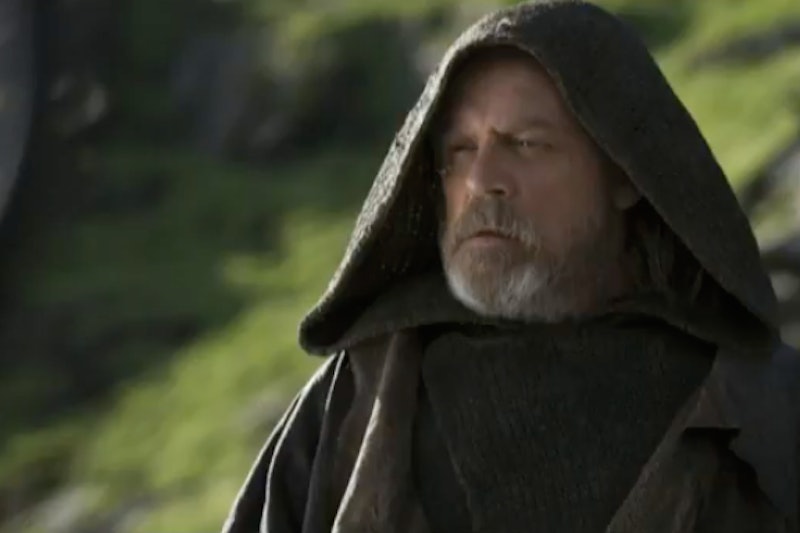 Having just premiered on the Star Wars Celebration live stream on YouTube Friday morning, the first trailer for Star Wars: The Last Jedi seems to have kicked off with something extremely important. Luke Skywalker's first words in The Last Jedi trailer appear to be, "Breathe. Just breathe. Reach out. What do you see?" Which, oh my goodness, you guys, it must totally mean something. Because, obviously, the first thing we need to address is the fact that Luke is clearly training Rey in the ways of the Force.

I think all fans expected to see that in The Last Jedi, considering how The Force Awakens ended. But Luke's final words of the trailer provide a troubling caveat to the first ones he utters at the start of it, as he says, “I only know one truth: It's time for the Jedi to end.” This is chilling and seems to raise the idea that Luke could be on the Dark Side in The Last Jedi. But, I actually have another theory about it all.

Because firstly, I don't think it's a coincidence that Luke starts the trailer with what sounds like Jedi Knight training, and ends it by stating his belief that Jedi should be a thing of the past. I mean, why bother training Rey in understanding the ways of the Force, if he believes it's something that should ultimately, be finished with? Instead, I believe that Rey's training could reveal something new and exciting, regarding the Force. And that Luke maybe saying that the Jedi need to end is either a way to protect her, or to acknowledge potential changes to the Force.

There's a very good chance that Luke is the last Jedi that the title is referring to, and though his closing statement in the trailer might sound negative without any context, there's a chance that it could actually be positive.

Could it be that Rey utilizes the Force in such a manner, and harbors such natural power for it, that she's managed to evolve it to a whole new level? A level which could maybe require a whole new form of control and understanding, and one which leaves Luke to realize that he is, in fact, the final Jedi? It could be that Luke discovers that his own skills, and his understanding of them, are nothing when positioned against the new threats of the Dark Side. But that maybe, Rey's are.

It'd certainly be an interesting new angle for the Star Wars canon to move forward with, and one that would definitely surprise and delight fans in equal amounts. Whatever the truth may be for The Last Jedi, I'm sure it's going to be absolutely perfect. And judging from this trailer, it'll be serving up one hell of an adventure. So, bring it on.

More like this
Lin-Manuel Miranda & Tituss Burgess React To 'Little Mermaid' Casting Backlash
By Radhika Menon
The 50 Most Powerful Characters In The Marvel Universe, Ranked
By Johnny Brayson
Lego Just Announced Its 'Black Panther' Set Release Date
By Maxine Harrison
Margot Robbie Breaks Her Silence On *That* Viral 'Barbie' Moment
By Maxine Harrison
Get Even More From Bustle — Sign Up For The Newsletter