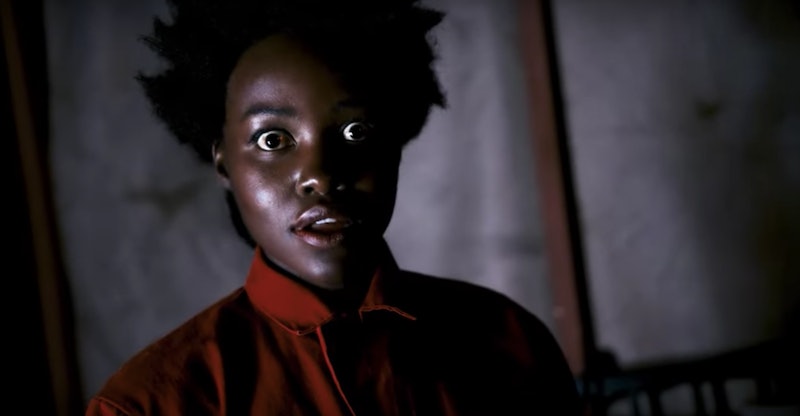 For those who thought they saw a tethered that looked just like Lupita Nyong'o at Universal Studios Hollywood's Halloween Horror Nights, you weren't seeing double. Yes, that really was Nyong'o as her Us character scaring people and honestly, the theme park needs to hire her for next year ASAP. A new video from Universal Studio's annual Halloween attraction shows Nyong'o having a little fun at other people's expense. Not to mention, giving the Academy another reason to give her an Oscar for her horrifying double role as Adelaide and her doppelgänger.

This past Saturday, Oct. 26, Nyong'o visited Halloween Horror Nights, which has an Us-themed maze, to get in on the scary fun. Dressed as her character Red from the Jordan Peele flick, she became nightmare fuel for so many theme park goers. She popped out with her golden scissors, laughed maniacally, and taunted people with paper people cutouts. Nyong'o apparently was so good at scaring people that no one even recognized her as the film's star.

But as this new video also reveals, before becoming one of the scarers she was just one of the unsuspecting visitors screaming their heads off. As she walked through Us' hall of mirrors into Adelaide's vacation home, screaming all the way, she came face to face with her own character, this time played by someone else. "That's the last time I'm making a horror film," she joked, which might be the best advertisement for Halloween Horror Nights ever.

This isn't the first time Nyong'o has played a prank on her fans. Back in 2017, while promoting Black Panther at San Francisco's Comic-Con, she walked around as the Pink Power Ranger. Not to mention, she also danced and crawled around the convention floor in full pink costume. Nyong'o even posed for photos with other Marvel cosplayers like Spider-Man and Star-Lord.

The only difference between then and now is this time around, Nyong'o's cosplay included a lot more screaming. But, really, all those shrieks at Universal Studio's are a testament to just how method Nyong'o is willing to go. According to her Us costar Shahadi Wright Joseph, Nyong'o would often channel her evil character Red when the cameras weren't rolling.

“She really kinda spooked me out a little bit,” Joseph told BuzzFeed earlier this year. “She would really get into character and wouldn’t talk. It was kind of creepy.” It appears all of Nyong'o's offscreen creepiness paid off.