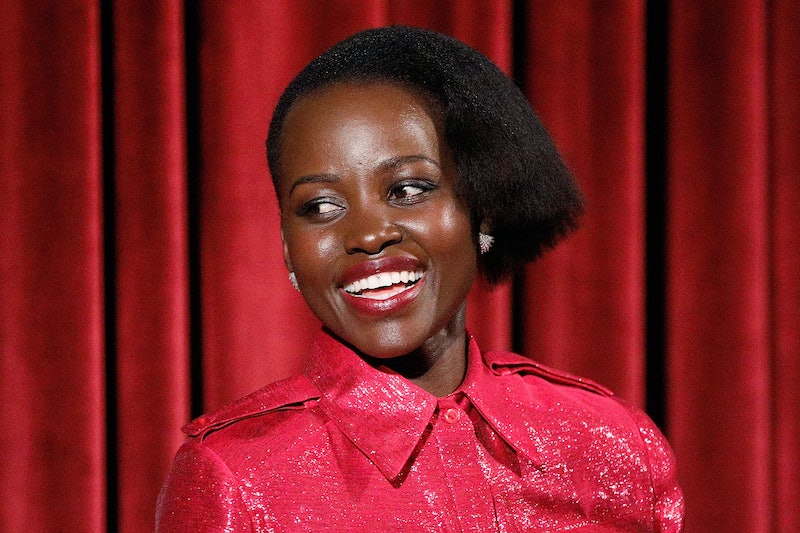 With the final season of Game of Thrones in the middle of airing, fans everywhere have been sharing all kinds of theories about the show and its characters — and not even Oscar winners can resist joining in. In a recent Twitter thread, Lupita Nyong'o proposed that her film Us is connected to Game of Thrones, based on the many striking similarities between the Tethered and the White Walkers.

According to Uproxx, the Oscar winner and Thrones superfan shared her thoughts on the ways that the Tethered — the terrifying villains from Jordan Peele's horror film, who are the murderous doppelgängers of the Wilson family — on Saturday, April 27, ahead of the much anticipated Battle of Winterfell. "Coming to think of it, the Tethered (#UsMovie) and the White Walkers (#GameOfThrones) have quite a bit in common," Nyong'o began her thread, tweeting out a photo of the Tethered and the Night King's Army of the Dead side by side. "1. They come in silence but not in peace; 2. They won't stop until they kill errrrrrrrrybody; 3.They wear block colors."

The actor's first three points already seem to highlight the many things that make both sets of villains incredibly scary — namely, the fact that the Night King has never spoken (much like the oft-silent Tethered) and their determination to destroy the entire world. For the Night King, that means sending the Seven Kingdoms into a never-ending winter; for the Tethered, that means killing their doppelgängers and taking the place they have been denied in the world.

Nyong'o continued her list of comparisons by noting that both villains have "a signature weapon" — scissors and an ice sword, respectively — and that "their death stare does half the job." (Anyone who has seen the Night King stare down his enemies can definitely attest to that one.) Finally, the Oscar winner wrapped up her list of similarities with a joke about both groups' lack of healthy food choices: "7. They could all use a drink of water and better dietary options," she wrote, along with a photo of some very gaunt-looking White Walkers.

Of course, Nyong'o also made sure to point out that there are plenty of ways that the Tethered and the White Walkers are different — namely, their respective reactions to fire and ice and a hilarious reference to the long-awaited Battle of Winterfell. "#TheTethered don't send out Save-The-Dates," Nyong'o wrote. "They make surprise visits."

Later that evening, the Us star also revealed who she wanted to see sit on the Iron Throne when all is said and done, although after this week's episode, she might have to reevaluate who she's rooting for to take control of King's Landing. "Well the world is safe with Lady Mormont obvs," Nyong'o tweeted in response to the BBC Africa Twitter account. (Sadly, Lyanna Mormont didn't make it out of the Battle of Winterfell alive.)

Nyong'o has been incredibly open about her love of Game of Thrones for years now; in fact, in 2015, she admitted in a 73 Questions interview for Vogue that she'd love to make a cameo on the HBO fantasy saga. While it sadly seems as if that won't become a reality before the show's final episode airs in May, at least Nyong'o got to bond with one of Thrones' most iconic stars, Gwendoline Christie, in the Star Wars saga.

The next time you think that you've been spending too much time thinking about what will happen next on Game of Thrones, at least you can take comfort in the fact that Lupita Nyong'o is just as big of a fan as everyone else.