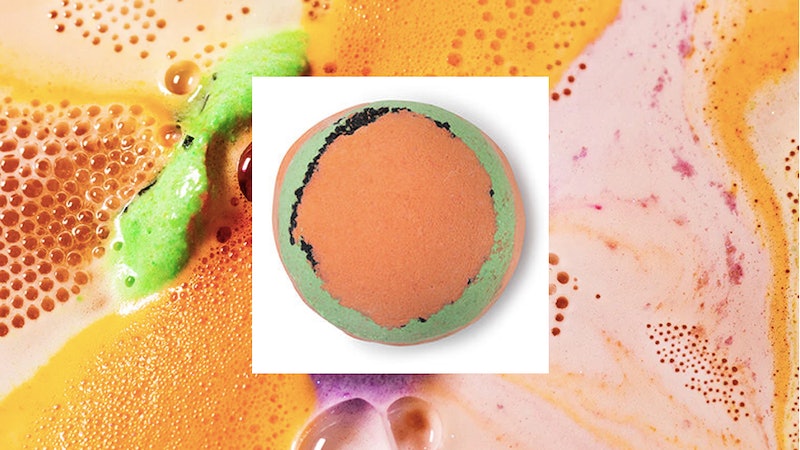 The bath bomb is designed specifically for Mercury retrograde, and is made with warming ginger, lemon, gardenia, and cinnamon oils to help you wash away any Mercury retro worries from your day. Because my friendlies, the upcoming Mercury retrograde on Halloween is going to be a doozy, and you're gonna need all the help you can get.

Mercury retrograde usually comes complete with a lot of mishaps and disasters, but this one — which begins on Oct. 31 and ends on Nov. 20 — is in Scorpio, which means that it's going to pack even more of a punch than usual. According to astrology website The Tarot Lady, this means we should expect some stressful lessons, secrets that could do "real damage" emerging, and overall life slow downs. Scorpio is already a mysterious, passionate, raw, intense sign — so Mercury being in retrograde within this sign means that all these aspects are going to to feel a bit like they're going haywire.

Basically, there's a lot of potential for things to go sideways while Mercury is retrograde in Scorpio. But baths and bath bombs always make everything a little bit better.

According to Lush, the Mercury retrograde-specific bath bomb is made with Sicilian lemon oil sourced directly from Sicily, Italy. "We use it for its astringent and cleansing properties," Lush said on its website. And that includes cleansing your body and soul to protect you from the erratic energy of Mercury retrograde.

And bomb or no bomb, baths have proven health benefits. A 2018 study published in the journal Evidence-Based Complementary and Alternative Medicine found that full-body immersion in a warm bath had greater mental and physical health benefits than taking a shower.

Study participants reported that bathing in warm water relieved pain. In addition, because "the downward force of gravity is reduced by buoyancy during bathing," bathers saw a greater reduction in anxiety and depression than those who showered.

If you don't have a bathtub, you can still use a bath bomb. On her website, lifestyle blogger Jessica Holoka explained how to get all the bath bomb benefits if you either don't have a tub or prefer showers to baths: "Place a bath bomb on the floor of the tub," she advised. "When the shower water hits the bath bomb, it’ll fizz and release its scent into the shower. You won’t get the moisturizing benefits of the bath bomb, but you’ll be able to enjoy its nice, soothing scent."

So if you want to get the Lush Mercury retrograde bath bomb to protect yourself bad cosmic vibes, this is a great way to use it in the shower. Lush also sells shower bombs so you can stock up on your favorite scents to use all year long.