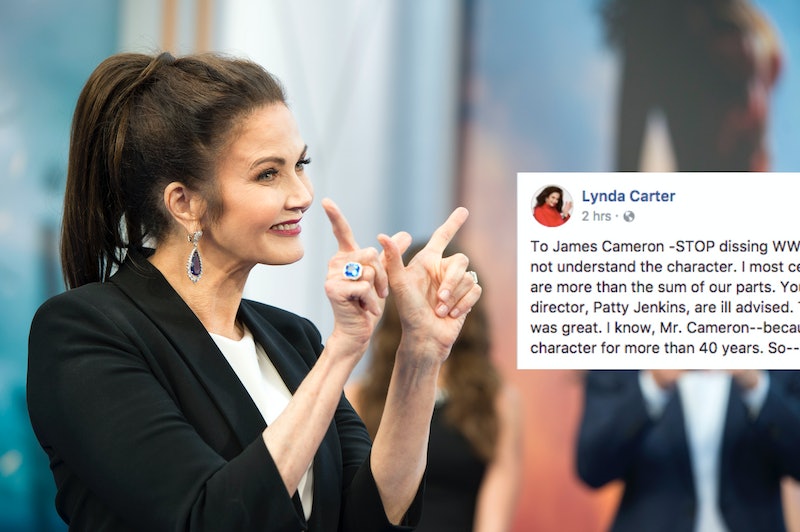 Sorry, James Cameron, but even the original Wonder Woman thinks you're out of step. Roughly one month after his controversial and highly publicized criticism of Patty Jenkins' summer blockbuster, Lynda Carter responded to James Cameron's Wonder Woman comments via a Facebook post on Thursday night, and let's just say she didn't take kindly to his misguided assessment. Carter wrote,

"To James Cameron -STOP dissing WW: You poor soul. Perhaps you do not understand the character. I most certainly do. Like all women--we are more than the sum of our parts. Your thuggish jabs at a brilliant director, Patty Jenkins, are ill advised. This movie was spot on. Gal Gadot was great. I know, Mr. Cameron--I have embodied this character for more than 40 years. So--STOP IT."

Based on the comment section, the internet overwhelmingly agreed. "Ugh, such a mansplainer," wrote one user. Added another: "There's more than one style of female action hero. Wonder Woman, Sarah Connor, Ellen Ripley, they're all cool. No need for him to play them off against each other." Plenty have pushed back against Cameron with similar sentiments in recent weeks, but perhaps because Carter has a vested stake in Wonder Woman — and because Cameron, at the very least, seems to respect the way she portrayed the Amazonian warrior — she'll be the one to get through to him.

For those still catching up, Carter's post comes after Cameron questioned the praise Wonder Woman has been raking in during an interview with The Guardian at the end of August. He called the movie's acclaim "misguided" because, in his eyes, star Gal Gadot reverted the character into a sex icon, whereas a woman like Sarah Connor, from his Terminator series, was a "strong," "troubled," and "terrible mother" who "earned the respect of the audience through pure grit." He concluded, “I’m not saying I didn’t like [Wonder Woman] but, to me, it’s a step backwards." A male director touting his own work over a woman's? The irony is not lost.

Patty Jenkins then countered Cameron's comments by chastising his "inability to understand what Wonder Woman is, or stands for, to women all over the world," and asserting that there is "no right and wrong kind of powerful woman." Then, rather than acknowledging that he may have missed the point — or, at the very least, held an uncommon perspective — Cameron doubled down on his comments, which is where Carter comes in.

Earlier this week, Cameron told The Hollywood Reporter that because Gadot once won the Miss Israel pageant and "was wearing a kind of bustier costume that was very form-fitting," the film wasn't breaking any ground in the way many had applauded it for. However, according to Cameron, Carter — who famously played Wonder Woman in the '70s TV series — "looked great," but wasn't objectified, so that made it OK. He said,

"There was nothing sexual about her character. It was about angst, it was about will, it was about determination. She was crazy, she was complicated. … She wasn’t there to be liked or ogled, but she was central, and the audience loved her by the end of the film."

In his eyes, it seems a woman cannot be both sexy and tough; the traits are mutually exclusive. Which is, of course, a ridiculous sentiment. Women are multi-dimensional human beings, and they can be many things at once: smart, beautiful, tenacious, tortured, utterly unlikable. In fact, it's this kind of misconception that is exactly the problem.

Wonder Woman was important not only because it put a woman at the forefront, but because she was a complex and fully realized character, not the one-note stereotype Cameron is describing. Wonder Woman is pushing us forward, Cameron is pulling us back, and Carter is simply calling him on his bullsh*t.