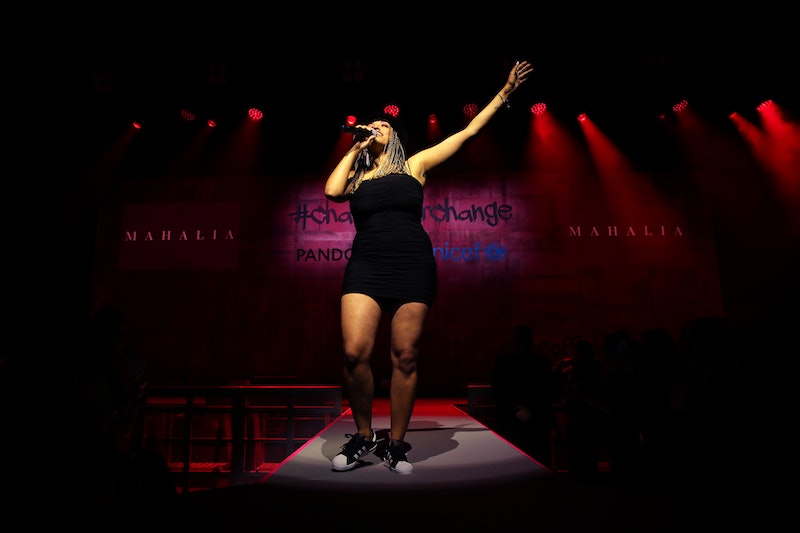 At 21 years old, British singer-songwriter Mahalia is already well versed in the music industry. Counting Ed Sheeran among her earliest fans, the Leicester-based artist signed her first record deal in her early teens, and has been honing her smooth sound – think early-noughties RnB, jazz and neo-soul – ever since. Her 2019 debut album Love and Compromise (she described her 2016 release, Diary of Me, as a "project" rather than an album) was well worth the wait: the product of patience and collaboration, including tracks with Little Simz and Burna Boy.

The record borrows its title from the wise words of Eartha Kitt – in a 1982 documentary, the singer, actor and activist is asked whether she’d ever compromise for a man. In response, she roars with laughter: “A man comes into my life and I have to compromise? For what? A relationship is a relationship that has to be earned, not to compromise for.”

It’s an sentiment that Mahalia aligns with too. Whether she’s reeling off the ways she gave everything to a failed relationship, or basking in her newfound independence, her music is a super-shot of self-appreciation.

Here, Mahalia tells us about the strong women who inspire her, how she gets over heart-break and her recent charity gig with UNICEF x Pandora.

We celebrated International Women’s Day this month – is there a particular woman who really inspired you growing up?

I always loved India Arie when I was growing up. She was such a breath of fresh air for me – I had never seen another woman like her before. From the things she said, to the way she looked, to the way her music sounded. I was so inspired by her.

What’s the best piece of advice you would give to yourself at 13, when you signed your first record deal?

Trust yourself. Above anybody else. Don’t be too stubborn. Listen to mum and dad. Play your guitar. And strap in… there’s going to be a lot of bumps in the road.

How was it growing up in Leicester?

I loved Leicester a lot growing up. It was pretty quiet, but I had a great time. There wasn’t much to do in my town besides riding your bike around the canal, or hanging out in the park… I think that’s why I started making music!

It feels incredible. I remember finding out about the Critics’ Choice nomination and I was over the moon! To be nominated again this year was a real moment for me. I’ve grown up so much personally and professionally this year, and being recognised in that way really was the cherry on top of the cake.

Love and Compromise borrows its title from something the American singer and activist Eartha Kitt once said – why do her words resonate with you?

I had never heard another woman talking in that way before. When I first saw the video, I remember thinking I wanted to be just like her. It was uncompromising yet heartfelt, and I loved that.

‘I Wish I Missed my Ex’ and ‘Sober’ are both songs about very specific – and relatable – situations. As a listener, I’m always searching for that sense of connection; a song that takes an abstract feeling and crystallises it into something more tangible. Are you conscious of that when making music?

100%. It’s always been important to me to write music that is truthful and genuine. That way, I feel like I have a better chance of connecting with more people. I love making music about real life stories that have come from somewhere personal!

You’ve got a talent for writing a heartbreak banger. What’s your best break-up advice?

Oh gosh, I’m not even sure… I’m still trying to find my fail-safe method! If there’s one thing I would say, it would be to just try and focus solely on yourself. It’s okay to be selfish when it’s to protect your heart.

On ‘Proud of Me’ you say: “I don’t need your publicity all up in my business”. Is it important for you to keep certain aspects of your life private, and how do you stay grounded?

Yes, for sure! Keeping certain facts about my life private is extremely important to me. I used to be really open and honest about everything and, although I still am, I think it’s important to hold certain things close to my chest. When I’m at home, I spend time with my loved ones mostly, [that keeps me grounded]. Seeing my friends and family is the best way to properly have down time.

You recently performed alongside Anne-Marie, at UNICEF x Pandora's #CharmsForChange concert. How did you first get involved with the charity?

Initially, the conversation came via my label… however I was already very aware of the incredible, global work UNICEF participate in. It’s so great that Pandora have collaborated with UNICEF in their work supporting children, creating awareness around gender equality, education and empowerment! These are issues I am passionate about and campaign for, so I was really excited to be involved.

Finally, what message do you hope people take from your music?

Honesty, above anything. I’d hate for people to hear my music and ever think I was lying or being disingenuous. And happiness!! I hope my music makes people happy.