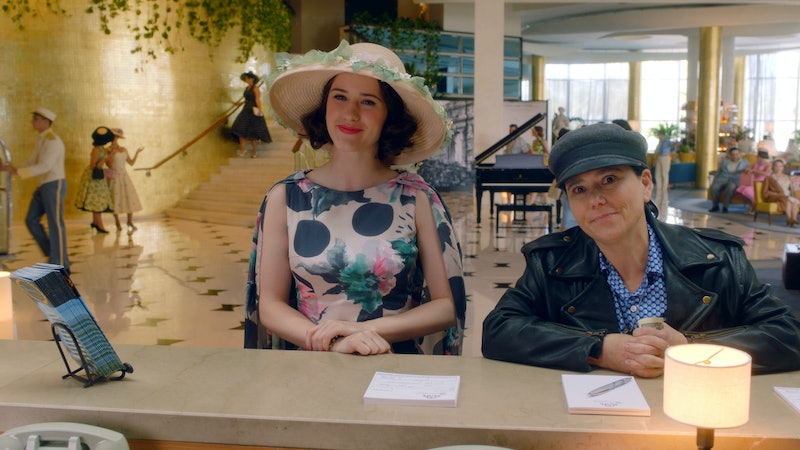 Spoilers ahead for The Marvelous Mrs. Maisel Season 3. Money looms large in the world of Marvelous Mrs. Maisel, and that holds especially true for the women, who struggle against the limited amount of financial freedom granted to them in the '60s. Season 3 forces Midge and her family, for the first time, to confront the cost of their exorbitant lifestyle — and their inability to now afford it. But it's through Midge and Susie's relationship that issues of income and class ring clearest. Though their spats are often smoothed over, Season 3 fully demonstrates how much more difficult life is for Susie, and how Midge is still unable to truly empathize with Susie's lived reality.

As star Rachel Brosnahan tells Bustle, Midge is someone who's "accustomed to being the center of everyone's universe," and that undercuts her entire dynamic with Susie, the first friend she made outside of her upper class enclave. Their relationship is genuinely loving — Mrs. Maisel often portrays them as a squabbling old couple, and Midge even bought Susie a ring in Season 2 — but it's defined by a distinct and unequal power dynamic. Despite Susie being a manager to a rising star, she still lives in poverty, and she's often at the mercy of Midge's moods and whims (like when she disappeared to the Catskills for a month, forcing Susie to sneak in as a resort worker).

This imbalance is most exemplified in Season 3 when, in the middle of a USO dance they're attending at the start of Shy Baldwin's tour, Midge becomes furious at Susie for agreeing to manage Sophie Lennon. A talent agent taking on several clients is not unusual — Susie herself is based on Sue Mengers, who managed stars like Barbra Streisand, Michael Caine, Cher, and Joan Collins — and Susie makes it very clear that she's only working with Midge's nemesis because she's literally impoverished.

"My apartment is $40 a month, and I have to sublet it to Jackie," Susie tells Midge desperately. "There's no choice there. I can't afford not to." (We learn later that Susie made all of $20 on Midge the prior year.)

She then explains that when Midge makes $4000, she makes only $400 — something Midge doesn't seem to have even considered. Midge responds with a pointed "f*ck you" before joining a conga line of similarly well-dressed, affluent women, while Susie has to leave to catch a late flight to New York for Sophie.

Midge continues to punish Susie for her decision — to look out for her own well-being, really — in the next episode. She shows up early to a meeting, blames Susie for being late, and leaves before Susie can discuss plans for Shy's tour. Susie, meanwhile, reaches over and eats from Midge's leftover soup.

"It's like she abandoned me ... I shouldn't have to share her," Midge fumes to Imogene in her aerobics class. Though Imogene peppers Midge with several logical questions — Susie makes enough off just you, right? Susie must have savings then? Susie must be making half of the cut of the tour? — Midge never fully realizes that she's ensuring this unequal relationship continues. Imogene ultimately coddles Midge, agreeing that despite the answer to all of those questions being an unequivocal "no," Midge "should be enough" for Susie.

"If Susie wants to become a real manager, she's going to have to look further than Midge," Susie's actor Alex Borstein tells Bustle, likening Midge to a petulant child. "I think Midge can't help but feel like she’s getting less attention. When a mommy has a second kid, no matter how much you dote on number one ... they're still going to feel the pull of the new kid."

Mrs. Maisel is honest in depicting Midge's childish nature, but it's ultimately disappointing that even when they make up, Midge never offers to give Susie more of a cut. Sure, Midge's father lost his job, Rose lost her inheritance, and Midge is shown hustling with radio work, but the Weissmans still have savings, as well as a network of upper class acquaintances who they can fall back on for help, like the Maisels. In comparison, Susie has absolutely no safety net, and she destroys her one liquid asset — her deceased mother's house — to collect the insurance and make up her gambling debt (which likely wouldn't have even arisen if she weren't so desperate for cash.)

Similarly, though Sophie is disgusted by Susie's small apartment, she never follows through with her promises to upgrade Susie's living situation. It's in this way Mrs. Maisel shows how Midge and Sophie are really just two sides of the same coin: two upper-class, privileged women who don't understand that their daily frustrations and setbacks are small fry compared to Susie's, who's always on the verge of being homeless.

Its ultimately only Sophie who's punished though; her play backfires spectacularly, and Susie dramatically reprimands her in the streets before reaffirming that Midge is "not her competition" and is "gonna be a goddamn legend" one day. Susie leaving Sophie is meant to be a triumphant moment, but what it really means is Susie's other reliable source of income is gone, and she's back to being with just Midge, her dear friend who won't give her more than 10% of the profits.

It remains to be seen if a fourth season will truly interrogate Midge's selfishness — particularly in the wake of her getting fired from Shy's tour — or if Midge will continue to find ways to ignore the issue. The third season ends with Susie breaking down over her newfound gambling problem, while Midge approaches Moishe to buy back her old Upper West Side apartment, with money that it's implied Susie gambled away.

That's undoubtedly going to cause a major confrontation, but it's a necessary one: will Midge finally acknowledge the limits she's pushed Susie to and do right by her? Midge is at turns loveable, witty, and kind, but her actions towards Susie make it sometimes difficult to sympathize with or even like her. Will Midge finally grow in Season 4, or is she ultimately doomed to become a Sophie: elegant, rich, and cheerfully unbothered by the people who carried her to stardom?

More like this
Michael B. Jordan Tackled His "Public Breakup" With Lori Harvey On 'SNL'
By Brad Witter
Here’s What Happens To Bill & Frank In 'The Last Of Us' Video Game
By Brad Witter
Shonda Rhimes Responded To The Surprise Exit Of A Day 1 'Grey's Anatomy' Figure
By Grace Wehniainen
Everything To Know About A Potential 'Lockwood & Co.' Season 2
By Gretchen Smail
Get Even More From Bustle — Sign Up For The Newsletter
From hair trends to relationship advice, our daily newsletter has everything you need to sound like a person who’s on TikTok, even if you aren’t.