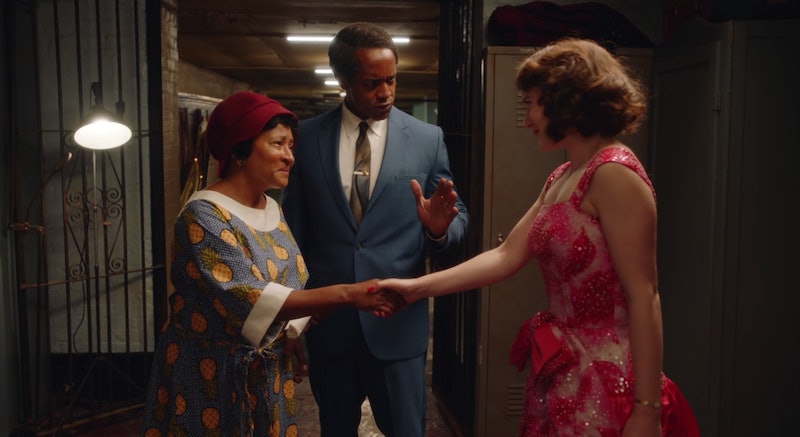 The Marvelous Mrs. Maisel has always been about Midge's failures as much as it has her success, and in Season 3, that includes her failure to acknowledge her own privilege. In fact, the show in some ways feels like it's responding directly to criticism it's received in the past — viewers have joked on Twitter that the only Asian in Marvelous Mrs. Maisel's first two seasons was a woman sitting on a bench in the background, and now Joel has a new love interest in Mei Lin, a spunky Chinatown resident he meets in the process of opening his own club. Ultimately, though, the way The Marvelous Mrs. Maisel handles race is comparable to Midge: perhaps well-meaning, but still flawed.

The Season 3 cast is noticeably more diverse than in the past: in addition to Mei, played with verve by The Path's Stephanie Hsu, Shy Baldwin (Leroy McClain) gets an expanded storyline, and Sterling K. Brown joins as his manager Reggie. It's through the latter two that Midge begins to notice her white privilege. After Shy is beaten up by a man he brings home one night, Midge attempts to convince him to come back to her room at the swanky Fontainebleau hotel to fix him up. "I have some makeup," she explains. "Harriet, my friend at B. Altman, taught me some tricks about darker skin, so I can just..."

Shy cuts her off. "I can't go to your hotel. This is Florida. In Florida, we stay in Overtown," he says, referencing the segregated and designated Black neighborhood. There's a pregnant pause, and though Midge recovers quickly, the implication is that it literally never occurred to her that Shy can't move through the same spaces she does. (This is all the more eyebrow-raising considering they're touring nationwide during the height of the Civil Rights Movement, something the show never acknowledges.)

Midge is again confronted by her white privilege when Shy returns to perform in his hometown of Harlem. Though she's excited to meet Moms Mabley (a real comedian), Moms' manager is curt to Midge, telling her she stole Moms' slot on the bill. "Who the hell is this little white girl, anyhow?" he asks.

Midge approaches Reggie about the interaction, asking fretfully if Harlem is really the "right crowd" for her. It's only then that it dawns on her that she's a privileged interloper in this community, and that the audience might not appreciate her opening for Shy when that spot could've gone to Moms or another Black comedian.

These are remarkable scenes in that this is the first time Midge acknowledges the fact that while she's Jewish, she's still largely viewed and treated as an upper class white woman in America. (And Marvelous Mrs. Maisel is careful to never show instances of anti-Semitism.) As Midge grows in her career, so too does she start to realize that art is never divorced from politics and society, and that her rising platform means acknowledging the advantages and power she has compared to others — even if, as a woman in the '60s, she often feels like that doesn't amount to much.

This all together makes for a more serious and nuanced season, but the show still falters in regards to race in more subtle ways. For example, while Joel's relationship with Mei is cute and he has no ill-will towards the illegal Chinese gambling ring in his basement, all of the other Chinese characters are lumped together as a foreign and comedically impenetrable blob, only understandable through our English-speaking go-between Mei.

Midge's interactions with people of color are similarly misguided. In the past, Marvelous Mrs. Maisel was criticized for featuring a small scene in 1959 where Midge smokes a joint with Lenny Bruce and some Black club-goers, set in the same year that Miles Davis was beaten just for sharing a cigarette with a white woman in real life. The third season still has the same kind of rose-tinted anachronisms. For example, the first leg of Shy Baldwin's tour is a USO holiday show which features a diverse Rockette-esque group dancing for a sea of adoring, mostly white soldiers. In reality, the Rockettes didn't welcome a woman of color into their ranks until 1988; their official stance was that any non-white legs would "distract" from the performance.

There's also the issue of how Midge unconsciously acts around Black people. She tends to interject whenever Shy is talking to his Black entourage, and it's never really acknowledged if Midge does this to everyone because she's impatient, or if she unconsciously feels she's owed more of Shy's attention. She demonstrates this physically too: when Susie tells Midge at a dance that she's managing Sophie Lennon, for example, Midge angrily storms off and shoves a Black woman out of the conga line to take her place. This is treated as a visual gag, with no commentary about why Midge feels comfortable doing that — particularly when there were plenty of white women she could've shoved instead. It makes you wonder if creators Amy Sherman-Palladino and Dan Palladino realize how this makes Midge look.

The easy explanation for all of this is that it's fiction, and at the end of the day this is a frothy tale about a female comic forging a place for herself in a male-dominated space. In a perfect fantasy world, it wouldn't matter who Midge shoved out of line because everyone would be treated equally and have the same rights and privileges. But this is a show being made for people living in a world where that historically hasn't been the case — and about a woman whose entire act is premised on lampooning societal prejudices — so it's disappointing the show doesn't have a firmer grasp on race, even when it seems to be trying to. Maisel's narrow perspective may be a reflection of Midge's own insular upbringing, but there's a way to have a naive protagonist contained within a smart show that still acknowledges the protagonist's shortcomings.

Is Maisel that self-aware? It doesn't always feel that way, and that ultimately makes it a little less marvelous.