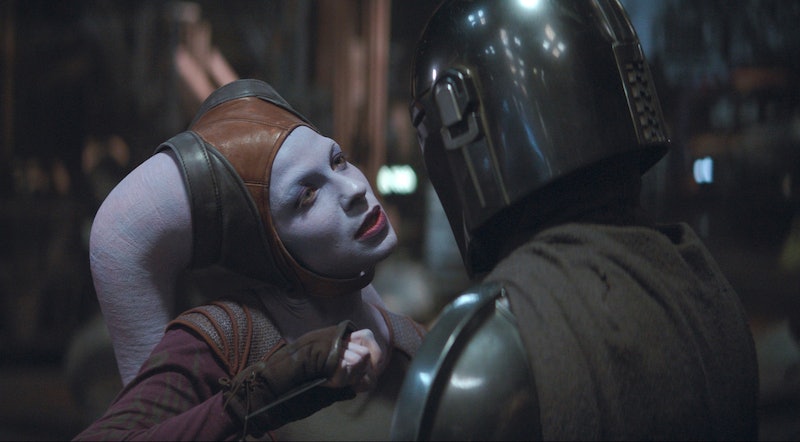 Spoilers ahead for The Mandalorian Chapter 6. Despite his ironclad exterior, Mando can be a big softie. Turns out, he even has an ex-girlfriend in the form of the Twi'lek mercenary Xi'an. With the introduction of Natalia Tena's new character in "The Prisoner," The Mandalorian was a Game of Thrones reunion of sorts. While Pedro Pascal's Oberyn Martell and Tena's Osha never crossed paths in the HBO series, their characters are exes on The Mandalorian and there's some unfinished business between these two.

To earn money for Baby Yoda and himself, Mando unwisely joined the crew of Ranzar "Ran" Malk (Mark Boone Jr.). Mando, Xi'an, Mayfeld (Bill Burr), Burg (Clancy Brown), and droid Zero (Richard Ayoade) attempted to help Xi'an brother Qin (Ismael Cruz Cordova) escape from a New Republic prison ship. But years before this job, Mando and Xi'an had engaged in a romantic fling and Xi'an is absolutely not over Mando. And who can blame her when she may be one of the only people who has ever seen his face? Unless he keeps it on while having sex, which is an entirely different story.

It's pretty telling that Mando was once involved with someone as cruel and amoral as Xi'an and their past relationship highlights how he was much more ruthless before he became Baby Yoda's caretaker.

But Pascal and Tena once played good guys in Westeros. And, as is the way of Game of Thrones, that meant they inevitably faced tragic ends.

While Oberyn Martell is one of the most memorable characters on Game of Thrones whose influence was felt long after he died, Osha lasted much longer on the show. Tena's Wildling character was introduced in Season 1 and she helped Bran Stark until they parted ways toward the end of Season 3. She returned with Rickon in Season 6 before they were both killed by Ramsay Bolton. Meanwhile the Prince of Dorne showed up in King's Landing in Season 4. The Mountain killed him that very same season during Tyrion's trial by combat.

This woman from the North of Westeros and this man from the South of Westeros both can take some credit for Tyrion getting Bran Stark to become the King of Westeros; Osha had protected Bran and Oberyn had protected Tyrion. But Osha and Oberyn were never in the same season of Game of Thrones and they never interacted. Yet, that doesn't make it any less exciting that the actors behind these two beloved Game of Thrones characters have crossed over to the Star Wars universe together. Better yet, these two were a thing.

Unfortunately, Xi'an is no Osha. She tricked Mando by locking him up in her brother's cell, but she really wanted him dead. Mando, demonstrating how much he has changed since he used to roll with this crew, showed Xi'an mercy after her betrayal. Instead of killing her, he locked her, Mayfeld, and Burg all in a jail cell. However, Mando's kindness will come back to bite him since those three will surely come after him and Baby Yoda when they manage to escape. And Xi'an might be out for even more revenge given that Mando's not just broken her heart, but also got her brother killed.

Rather than worry about what Xi'an will do to Baby Yoda in The Mandalorian, think back instead to when Tena played a much more caring character in Game of Thrones. She would have done anything to protect Bran and Rickon. And hey, Tena has some experience looking after Harry Potter too. So maybe when she returns to The Mandalorian, she will channel those characters who knew the value of caring for magical children. But, the far more likely scenario is that Xi'an will be hellbent on destroying Mando and Baby Yoda — and neither Osha nor Oberyn would approve.