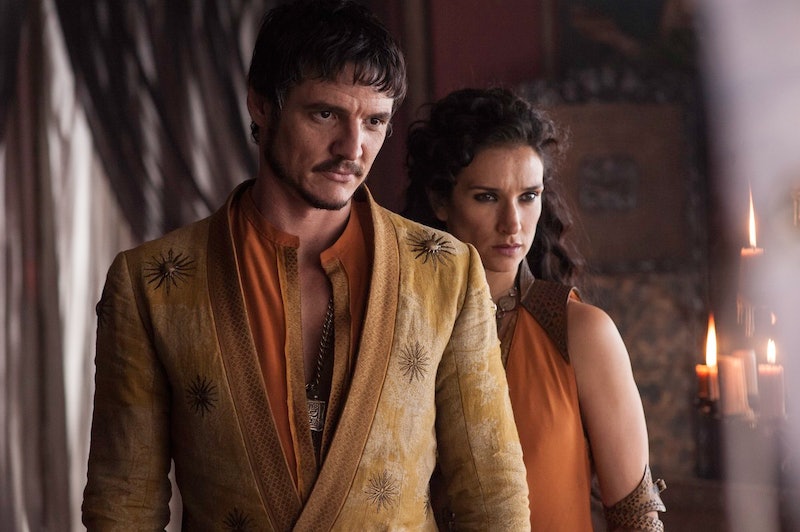 One of the best characters on Game of Thrones came in for a season, radiated like the sun, and then imploded. That would be none other than the Dornish prince, Oberyn Martell, who died on Game of Thrones back in Season 4. His death was simultaneously devastating and thrilling as he died fighting the Mountain (Ser Gregor Clegane) for Tyrion Lannister's innocence in the murder of Joffrey. A world with Oberyn's cocksureness would certainly be a better place and immediately after he died, fans were already imagining how Game of Thrones would be if Oberyn had lived. And I'm here to tell you — Westeros would look very different than it did at the end of Season 6 if Oberyn Martell were still around.

Oberyn was outrageously charismatic right from his first appearance and even though he was only in one season of Game of Thrones, he is a beloved character. He had agreed to be Tyrion's champion in the trial by combat as a way to seek revenge against the Mountain for raping and murdering his sister — and killing her children — years ago during Robert's Rebellion. (Can you ever unhear Oberyn's cries of, "You raped her! You murdered her! You killed her children!"?) Yet, just when you thought Oberyn had successfully defeated the Mountain, the Mountain tripped him and pushed his eyes into his head. Oberyn's death was graphically terrible, but also upsetting since he was such a lovable character. However, beyond missing Oberyn's fluid sexuality, his lust for revenge, and his general pleasantness and levelheadedness (if you ignore that revenge bit), his death set off a chain reaction of events that cannot be undone at this point.

Oberyn dying has led to some pretty bad — and surprisingly, some pretty good outcomes — with the bad outweighing the good for the most part. So let's take a moment and imagine a Game of Thrones world where Oberyn killed the Mountain before he started strutting around and see what a better place Westeros would be.

1. Tyrion Would (Maybe) Still Be In King's Landing

If Oberyn had defeated the Mountain, then Tyrion would have technically been found not guilty of Joffrey's murder. That means, he wouldn't have been sentenced to death and wouldn't have had to escape King's Landing. Of course, Cersei would not have been satisfied with that outcome, so Tyrion might have skedaddled anyway, but there's a chance that he could have stuck around.

2. Daenerys Would Be Missing A Key Advisor

If Tyrion had stayed in King's Landing, or didn't have to flee in the cover of darkness as a fugitive, he may never have gone to Meereen to meet Daenerys. Since their alliance is one of the best parts of Game of Thrones currently, that's at least one good thing that came from Oberyn's death.

Maybe, just maybe, Tyrion wouldn't have killed his dad and ex-lover if he wasn't a fugitive. While Shae being alive wouldn't affect the politics of Game of Thrones, Tywin being alive definitely would have kept Cersei under control. Yet, after what Tywin put Tyrion through, I hope that the youngest Lannister child would have killed Tywin and Shae, even if he found them sleeping together as a free man.

4. The Dorne Plot In Season 5 Would Have Been Better — Or Never Even Existed

Many book readers hated the TV show's version of Ellaria and her Sand Snakes in Dorne during Season 5. This may be getting too hypothetical, but if Oberyn hadn't died, there's a possibility Game of Thrones would have never even showed viewers Dorne — thus eradicating that entire controversial story line. I don't think that would have been the solution most fans would have wanted, but just saying, if it never existed, there would be no reason to hate on it.

5. Cersei Wouldn't Have Lost Her Daughter

This one's a biggie since if Cersei wasn't somewhat responsible for the death of Oberyn, then Oberyn's lover Ellaria wouldn't have poisoned Myrcella. Those Dornish are really fond of their revenge and Cersei is really found of her children, so this was a lethal combination that had repercussions that went far beyond these two powerful families.

Ellaria's revenge did not end with Myrcella since Oberyn's brother and leader of Dorne, Doran Martell, was killed in her coup for not doing anything after his brother was killed in King's Landing. This changes the power landscape in Dorne significantly as Doran was a reasonable leader while Ellaria is not so much.

7. Trystane Would Still Be Alive

Last, but not least, in the killings that were directly related to Oberyn's death is his nephew Trystane, who was killed by his cousins — the Sand Snakes — in Season 6. Did anyone really care about his death? Probably not, but it makes Ellaria's power over Dorne officially official.

Not only would the new, zombie-like Mountain not exist to do all of Cersei's bidding, but the Mountain would probably just be dead if Oberyn had lived to defeat him. Although that would stop fans from having fun speculating about Cleganebowl (where the Mountain and his brother the Hound will face off), I think it's safe to say that no one would mind seeing the seemingly invincible and half-dead Mountain just be full-on dead.

Perhaps the worst consequence of Oberyn's death is that it kind of led to Cersei taking over the Iron Throne. The High Sparrow shenanigans may have still happened with Oberyn alive, but Cersei would be much less vengeful if Myrcella was alive and Jaime would have stayed in King's Landing if he hadn't needed to go retrieve her. Cersei losing it over her children's deaths was probably inevitable since it was prophesized that all of her children would die before they were even born, but Oberyn's death definitely acted as a catalyst for Cersei to become the ruler of Westeros.

One of those other good things that came from Oberyn's death is the fact that the end of Season 6 showed that Olenna Tyrell and Ellaria will be joining forces against Cersei — with a little help from Varys. Many other events occurred to help form this alliance, but I can't deny that I'm stoked to see what these powerful women will accomplish together.

Yeah, Ellaria obviously didn't take Oberyn's death well, but what about his non-fictional fans? I've had to move on from his death since Season 4, but it hasn't been easy. A lot of tears would have been saved if Game of Thrones just had the decency to let this character successfully avenge the death of his sister and live.

Unlike many other Game of Thrones characters, it's safe to say that Oberyn is never coming back and while that is tragic for HBO's series, one silver lining is that at least you can still watch Oberyn actor Pedro Pascal on TV in Netflix's Narcos. Although that might not offer much consolation to Game of Thrones fans, it sure is good news for Narcos ones.