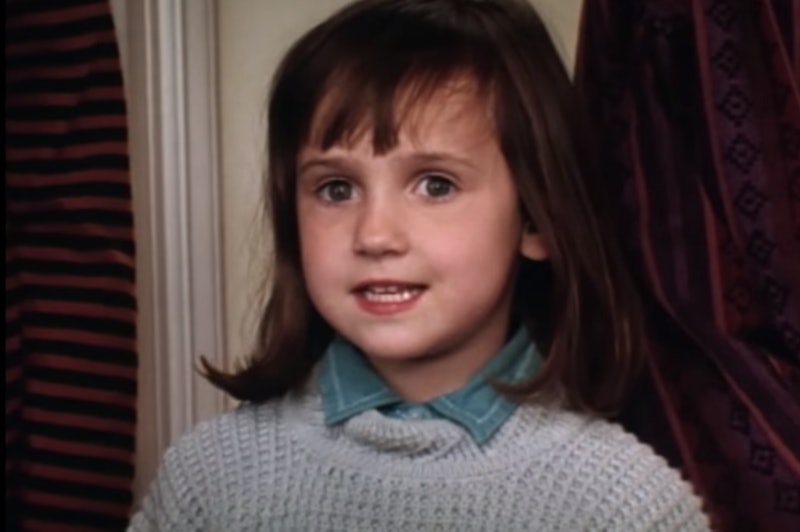 One of the '90s most beloved stars is the charming Mara Wilson, who starred in kid-friendly classics like Mrs. Doubtfire, Matilda, and Miracle on 34th Street. In a new interview with Entertainment Weekly, the now adult Mara Wilson looked back on Mrs. Doubtfire just in time for the film's 25th anniversary, and reminisced about how the Robin Williams film kicked off her career as a child star. These day, the actor does voice work for shows like Big Hero 6, while focusing on her writing career. Even though it's been 25 years since her Hollywood career began, she still has plenty of memories about her time on the set of Mrs. Doubtfire.

Wilson recalled one particular instance of getting some excellent coaching from her movie mom Sally Field. There's an instance in the movie when her character, Natalie, gets angry about her parents' divorce, and uses some strong language for a 5-year-old in order to convey her frustration about not seeing her dad as much as she did before the split. To prepare for the scene, Field took the young actor aside and offered her the guidance she needed to nail the scene. Wilson explained,

"I remember when I had to say, 'We're his Godd*mn kids, too,' that Sally took me aside and rehearsed with me. She was so sweet — she was making sure I would say it more fiercely and more intensely, and then her saying, 'Good, you scared me this time.'"

The scene became one of the film's most famous, because it so accurately represented the complex feelings that kids have when their parents divorce. As E! News points out in their retrospective, the film's commitment to serving up a nontraditional happy ending that didn't involve the parents getting back together is one reason why the movie remains so beloved. By showing that a family can still be a family even if the parents are no longer together, Mrs. Doubtfire did something special for kids adjusting to similar changes in their own lives.

Even though she's now an adult and taking on new challenges beyond acting, Wilson is still recognized for her role in Mrs. Doubtfire. And she's also still hearing stories about how the film touched people's lives. She shared with E! that one time a woman didn't charge her for a spare set of keys "because Mrs. Doubtfire got her through a difficult time in her life." Wilson continued, "I was just in awe thinking to myself, 'Oh my gosh, something I did when I was 5 still has this amazing impact on people.'"

As Wilson told EW, Mrs. Doubtfire was her first movie audition. At just 5-years-old, she imbued Natalie with a sense of realism that became a powerful touchstone for so many young people. The bond that Natalie shared with her dad also played a big role in making the movie a success, and it seems that the honesty in that father-daughter dynamic came in part from how at ease Williams made the film's young stars feel on set.

In her interviews with E! and EW, Wilson shares the many ways that Williams kept his young co-stars entertained from making his carpet bag talk to rapping about ants. However, when she first saw him transformed into the titular character, the Matilda star admitted that she was a bit "intimidated," but she told E! that those feelings didn't last long. She said that Williams eased her fears. She explained, "But he immediately said, you know, 'Don't be afraid' in his gentle Scottish lilt, and I wasn't anymore."

Mrs. Doubtfire is a special film for many children of the '90s, but for Wilson it was both her first film and one where she was surrounded by actors who imparted plenty of wisdom to her. Even though it's been 25 years since the film debuted, it sounds like the former child star still has as much love for the movie as the rest of her generation does.