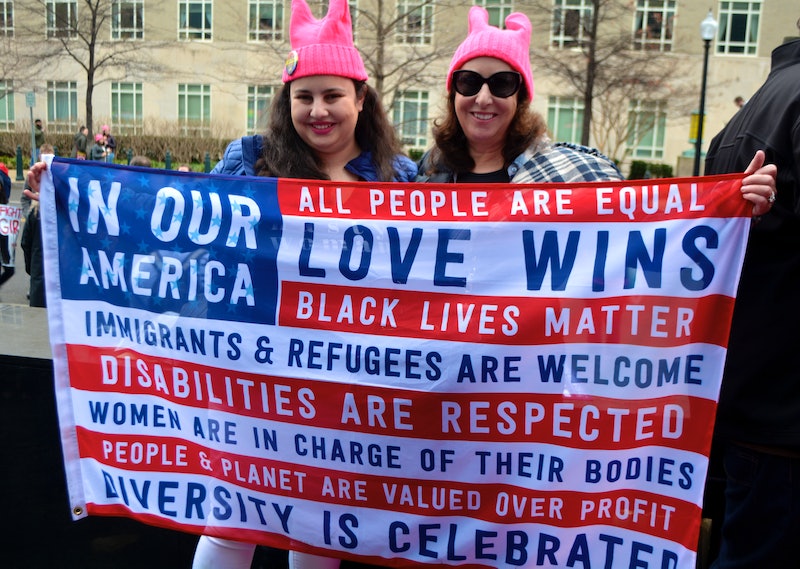 When it comes to feminism, the differences between my mother and I have always been about the intersectional. We've watched republicans debate abortion rights in mutual disgust, and shared the sick feeling in our stomachs when President Donald Trump accused Megyn Kelly of having "blood coming out of her wherever." But she’s also not afraid to chide me for being "too radical" when I tell my brother that I don't think men's opinions on abortion are important, or when I try and convince her of the merits of affirmative action.

So when she called me about a month after the election and asked if I wanted to go to the Women's March on Washington with her, my first response was, "When did you become such a feminist?"

She wasn't offended. "I’ve never felt this strongly before."

I barely hesitated. "Well, I can't let you go without me."

There were some close calls in the weeks leading up to the march. My mom almost canceled when she realized how crowded it'd be, but my dad convinced her not to let fear get in the way of something she really wanted to do. I almost backed out because I'd have to miss a day of school, but my friends talked me into making history.

Things suddenly felt a lot more tense between the two of us. Instead of laughing together, we were snapping at each other. Instead of enjoying the experience, I was searching the crowd for a chance to run away.

And so, on Friday, January 20, we got off our separate planes from the West Coast and arrived in Washington DC. I had poured over the Women March's official platform and was excited to be part of such a diverse movement. I also recognized the problematic implications of being a pair of white women with the resources to fly out and protest issues such as wage inequality.

But most of all, I was worried the two of us would fight. My mom was pumped about getting a pussy hat, but was scared that we’d get stuck in the middle of a mob. Though we usually get along, we have a tendency to build off each other's anxiety in stressful situations. When I expressed this concern to my dad, he simply responded, "buy her a martini."

For the most part, both of our expectations were met the following day: It was crowded. In every direction I looked, there was a sea of people with no end in sight, and room to move was nonexistent. But this crowd also felt different than any I’d ever experienced. Nobody was pushing or struggling to get ahead — everyone was just happy to be there together. With each speaker, the crowd reacted as one, cheering and jeering and dancing. All of the anger and frustration from the past months finally felt productive. Here we were, on the first day of Trump’s America, united and hopeful.

From Gloria Steinem to Janet Mock and America Ferrara, equal pay to #blacklivesmatter, it seemed that everyone had a voice and nothing was left unsaid. On an intellectual level, I’d understood intersectionality for some time, but there is a difference between understanding something and truly experiencing it.

I wasn’t the only one who was inspired — albeit in a different way. Before long, my mom leaned over to me and promised, “I’m going to get involved now. I promise. It’s time to start paying attention.”

But the rally was long, and after several hours, people around us began to grow restless. The schedule had said we’d begin marching at 1:15 p.m., but by 1 p.m. it became clear that there was still a long list of speakers left to go. Scattered chants of “March!” began breaking out, never lasting more than a few minutes. I quickly became annoyed when an older couple behind us began complaining loudly, making it difficult for me to hear the speeches. I was even more annoyed when my mom turned around to talk and complain with them. I was growing restless myself, but I didn’t want to be disrespectful and let negativity ruin the experience.

I begged my mom to stop complaining, but she responded that she was just “critiquing” and that “they shouldn’t have scheduled so many people.” Things suddenly felt a lot more tense between the two of us. Instead of laughing together, we were snapping at each other. Instead of enjoying the experience, I was searching the crowd for a chance to run away.

I heard another voice, coming from a white girl, who looked about my age. “We get it, there are thousands of names.” And then, I saw it: the only people shouting “March!” over “Say her name!” were white.

The group surrounding us decided to join the growing amount of dissenters who were trying to begin marching before the program was over. I begged my mom not to go, but she snapped that she needed to move, so we went. Luckily, we only made it about a hundred feet before the Mothers of the Movement were called onto the stage, and everyone stopped in their tracks. I was relieved for that small show of respect, but enraged again when I saw that half the people around me were too busy complaining about wanting to march to listen to what the women were saying.

My mom, who had been distracted during the introduction, leaned over to me and asked what the names meant. I could barely get through telling her before I burst into tears. I was ashamed to be part of a group that claimed to care so much, but listened so little. Were we only here to make ourselves feel good about marching? Seeing my reaction, my mom realized something was genuinely wrong, and finally listened when I begged her to stop complaining.

At first, my mother and I didn’t talk — but after a few minutes of marching, we both apologized for snapping at one another.

"I just don’t want the rally being long to be the one thing you remember from today," I said.

The new group we’d fallen into marching with was closer to my age than my mother’s. The chant of “Black lives matter!” was heard more than any other. My mom pointed out a sign exclaiming “Your feminism is either intersectional, or its bullshit,” and asked me what it meant. I was happy to explain.

An hour later, we arrived at the Washington Monument. My feet hurt, my mom needed the bathroom, and both our phones were close to dead. I had never felt prouder to be part of something.

People keep asking me if I had fun marching with my mom. The truth is, I did in some ways, but not others.

That night, after prying the shoes off our swollen feet and hanging up our pussy hats, I asked my mom what she’d thought of the experience.

"I loved it," she said. “Some parts were too radical, but overall, it was great." I asked her which parts she took issue with, and after some hesitation, she began with, “I’m not racist” — before telling me that she felt that "all the #blacklivesmatter talk" had become redundant by the end, and “just seemed so angry.” I asked her if she actually disagreed with anything they’d said.

“No,” she admitted, “maybe I just don’t like having to face it.”

I didn't know how to respond. Had I read those words in a distant relative's Facebook post or from an anonymous Twitter account, I'd have been filled with rage. Instead, I realized I had to respond more patiently if I wanted her to see my point of view. What followed was a long conversation about what it means to be a feminist, the differences between our generations, and which intersectional priorities we should have.

I realized that my mom and I have spent our lives fighting different fights. She was a business woman in '80s and '90s who'd struggled to be taken seriously in the workplace. I'm a millennial who'd grown up in the racially-diverse Bay Area being taught that intersectionality is the key to every issue. We both consider ourselves feminists, but we hadn't realized just how diverse that term really is. By the end of our conversation, we hadn’t changed each others’ minds, but I hope that at least we understood each other better.

People keep asking me if I had fun marching with my mom. The truth is, I did in some ways, but not others. If we hadn't marched together, I'd have marched with my friends my age and she with her's — and we might have both had more fun. But would either of us have learned anything new? I'm not sure we would have. Democracy is hard because listening is hard, but if we don't listen, how can we learn?

A movement isn’t strong because of people’s ability to come together and nod their heads in uniform agreement. A movement is strong when it’s as diverse and intersectional as it is passionate. For one day, millions of women from all across the world marched together to listen, to argue, and to learn. My favorite chant was “This is what democracy looks like!” — and I couldn’t agree more.