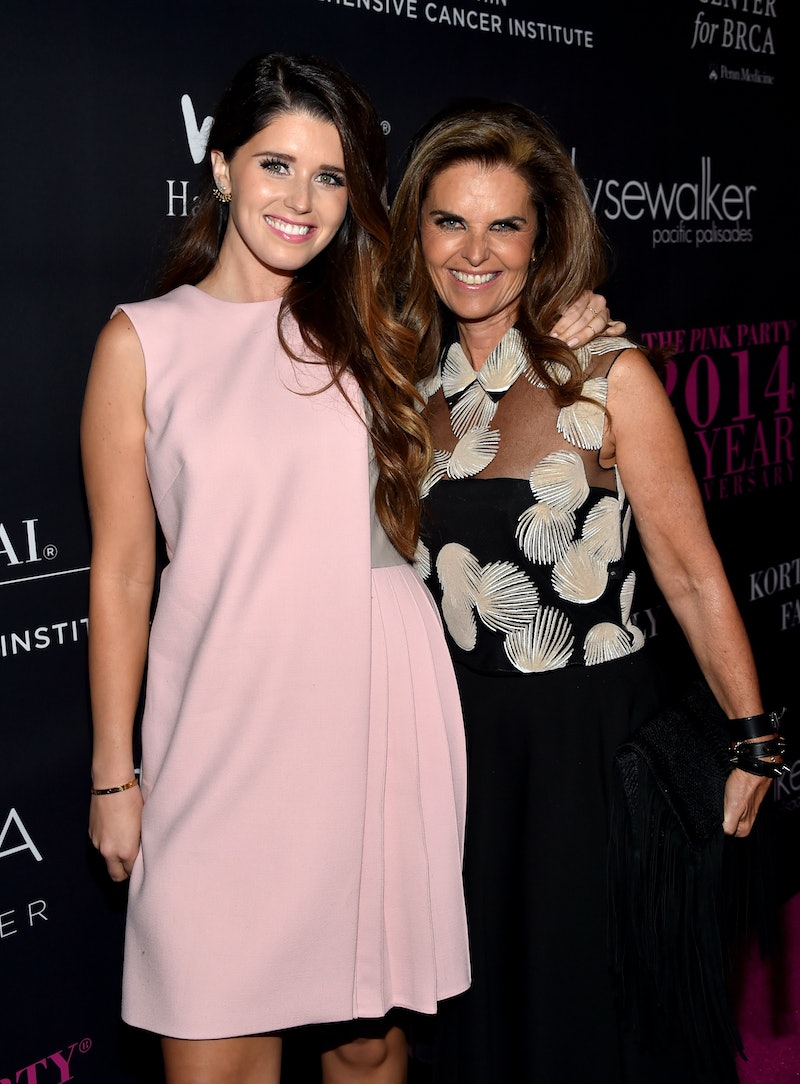 It's only been about a week since this celebrity couple's exciting news made headlines, and now Mariah Shriver is reacting to Katherine Schwarzenegger's engagement to Chris Pratt. If you're wondering what took her so long, well, Shriver did comment on her daughter's Instagram when the duo announced their happy news (below), but there's a good reason the journalist has remained overall mum. For Shriver, she's simply respecting Schwarzenegger's privacy.

While appearing on Today on Tuesday, Hoda Kotb and Jenna Bush Hager briefly discussed the fact that Shriver will soon gain a son-in-law. "Maria, we couldn't have you here on this day without saying congratulations," Kotb said. "Everywhere we turn we see a little bit about your daughter's engagement. So congrats to her and her new fiancé."

Shriver responded by thanking them for their well wishes and then added about her daughter, "She's super happy and gave me very strict instructions not to talk about it." Despite Shriver reportedly being the one who set her daughter up with the Marvel star, Schwarzenegger apparently told her mom, "It’s not your moment."

The Emmy winner continued, "I said, 'I know. No one wants to hear from me.' It's not my moment. So I know nothing, I say nothing."

It seems like Schwarzenegger simply wants to keep as much of her private life and relationship with Pratt as private as possible. Who can blame her?

As Hager noted while chatting with Shriver, Schwarzenegger wants to "keep whatever she can private." Shriver ageed, "That's right, exactly," but then she also quipped, "Good luck with that."

Shriver's right, public figures have a harder time keeping parts of their lives completely out of the limelight. That said, it doesn't hurt to try and to take extra precaution when it comes to protecting certain details of one's life, including a romantic relationship.

It's understandable why Schwarzenegger wants whatever is going to be said about her relationship with Pratt to come directly from either her or her future husband. If were you surprised to see that the Guardians of the Galaxy star announced their engagement on Instagram, that simply could've been their way of controlling the news rather than it leaking in a way they didn't want.

On Jan. 14, Pratt shared an Instagram with Schwarzenegger and her new diamond ring. He captioned it, "Sweet Katherine, so happy you said yes! I’m thrilled to be marrying you. Proud to live boldly in faith with you. Here we go!"

The author shared the same picture and wrote on Instagram, "My sweet love. Wouldn’t want to live this life with anyone but you."

It might very well be a challenge for Schwarzenegger and Pratt to keep their romance on the down low as much as possible. They certainly can't escape paparazzi every time they step out together.

That said, they've both made it clear they will reveal parts of their relationship whenever they see fit. In addition to announcing they will soon be tying the knot, on Instagram in December 2018 (six months after they made headlines as a couple), Pratt confirmed their relationship in a sweet birthday post for Schwarzenegger.

Their romance and everything that comes with it is for them to experience privately. When Pratt and Schwarzenegger want to allow the public in, they will, but on their own terms.