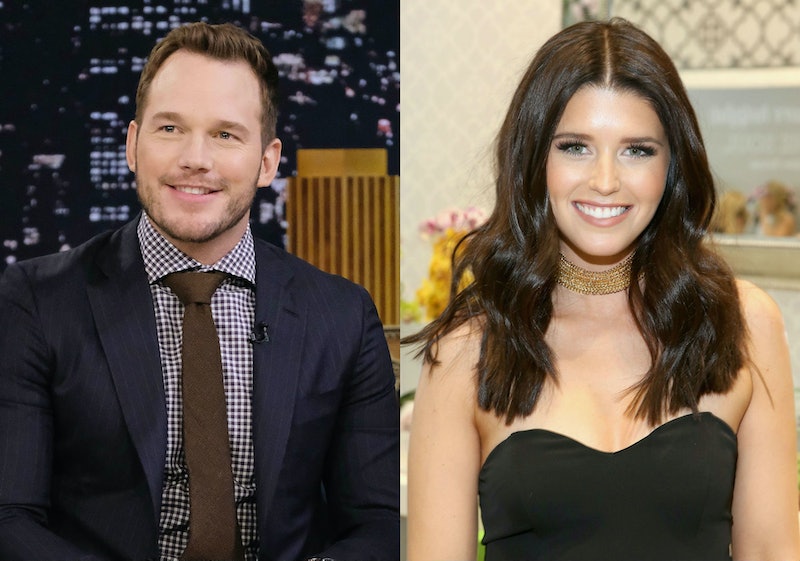 It sounds like this celebrity couple can't wait to get married. Apparently, Chris Pratt and Katherine Schwarzenegger's wedding is happening soon, like summer soon. Two sources have claimed to People that the newly-engaged couple are planning on walking down the aisle as fast as they can. Hey, that's love for you.

A source reportedly close to Schwarzenegger told the publication, "They are one of those rare couples that you root for from the beginning. It won’t be a long engagement — Katherine has already talked about having a summer 2019 wedding."

According to a different source who spoke with People, Pratt and Schwarzenegger "want a religious wedding." The source also added, "I know that Chris does, and I assume that she does, too. God is going to be a part of this marriage."

It wouldn't be surprising for them to have a religion-focused wedding, since their faith is something that reportedly bonded them from the beginning. As an insider previously dished to People,

"They have the same outlook on the world, and their faith ties them together. He’s really impressed that she’s vocal and unashamed about her beliefs in God, because that’s how he is. He’s constantly around other people who have no faith or are apologetic about it, but not her. She is willing to talk about it to anyone who will listen."

Plus, it's no secret that they've attended church multiple times together. And like the Guardians of the Galaxy star wrote when announcing their engagement on Instagram on Monday, "Sweet Katherine, so happy you said yes! I’m thrilled to be marrying you. Proud to live boldly in faith with you. Here we go!"

If they were to really say "I do" over the summer, well it just goes to show you how head over heels in love they are with each other. From the beginning of the relationship, which first made headlines over Father's Day in June 2018, the actor and the author have been said to be super serious.

Early last August, a source dished to Entertainment Tonight about their serious nature, "Chris Pratt and Katherine Schwarzenegger are the real deal. Chris and Katherine are a serious couple so Jack being alone with Katherine is normal."

In July 2018, not long after their romance became public, a source told ET that they've "gotten serious, quickly... Chris and Katherine have introduced one another to their family and friends, and have been almost inseparable when they are free."

As you can see above in Pratt's birthday post for Schwarzenegger in December of last year (this was also when they made their relationship Instagram official), it looks like the couple has bonded quickly and shared many happy moments together. Schwarzenegger is laughing and smiling in every photo, which speaks volumes about their partnership.

Whether or not Pratt and Schwarzenegger really do get married this coming summer, their wedding is definitely something to look forward. They are probably just as excited to finally become husband and wife as they were to get engaged.