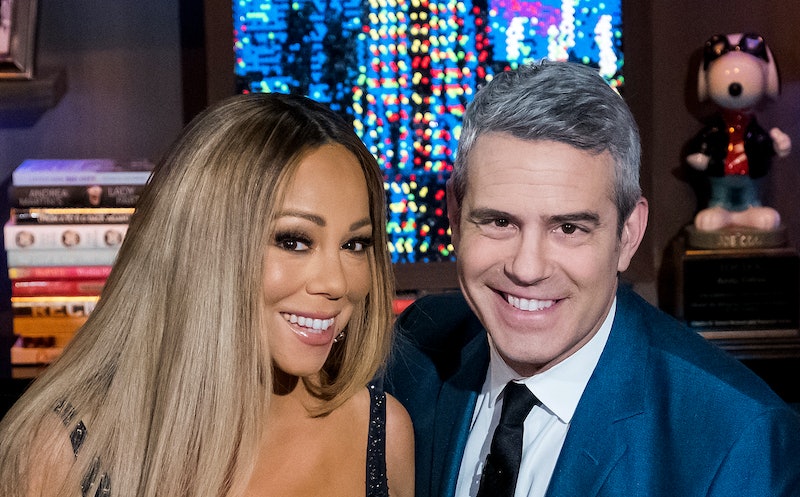 According to a Thursday announcement from The Associated Press, Mariah Carey's memoir will be published by Andy Cohen. The as-yet-untitled Mimi memoir will be released through Cohen's Henry Holt and Co. imprint, Andy Cohen Books, which was first announced in 2016 and set to launch next year. There's no word yet on when, exactly, Carey's memoir will land in stores, but it's expected sometime in 2020.

Mariah Carey announced her memoir in an interview with Variety last month. Fans expect that the new book will explain the fiasco surrounding Glitter — the singer's 2001 film flop and album release — but Carey chose her words carefully in the interview, lest she give something away. "I don’t want to give you more than you need," she told Variety, "because I want to save some for my book."

The forthcoming Mariah Carey memoir isn't the only work of nonfiction expected from Andy Cohen Books. According to Publishers Weekly, the imprint's "inaugural list will feature an as-yet untitled memoir by superstar pop singer Mariah Carey about her career and rise to pop prominence; Jackie Walter’s The Queen V, a book focused on vaginal health; and Bevy Smith’s Bodacious Dreams and Bevelations, a memoir about her transformation from business women into a national motivational personality."

Mariah Carey's memoir will be published by Andy Cohen Books in 2020.

More like this
Prince Harry Incorrectly Recites Christina Aguilera’s “Genie In A Bottle” Lyrics
By Jake Viswanath
Meghan Trainor & Daryl Sabara Are Expecting Their Second Baby
By Jake Viswanath
The Meaning Of Steve Lacy’s “Bad Habit” Lyrics
By Radhika Menon
The History Of Taylor Swift's "All Too Well" & What The Lyrics Actually Mean
By Jake Viswanath
Get Even More From Bustle — Sign Up For The Newsletter
From hair trends to relationship advice, our daily newsletter has everything you need to sound like a person who’s on TikTok, even if you aren’t.