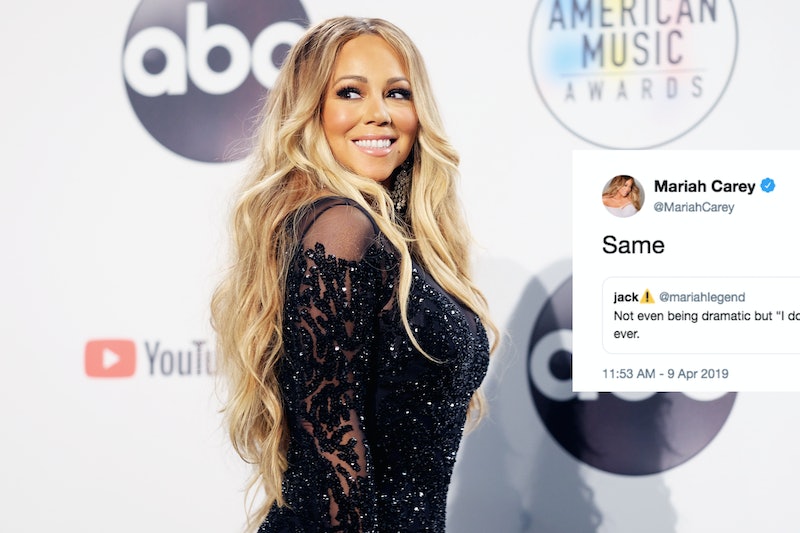 If there's anything Mimi loves more than Mimi, it's — wait. Is there anything Mimi loves more than Mimi? Unclear. Not that there's anything wrong with that, of course. Self-love is very important. As for what Mimi *doesn't* love, well ... Mariah Carey recently revealed her biggest turn-off via Twitter, and let's just say that her answer probably won't surprise you.

On April 9, one loyal little Lamb shared a very brief tweet that the Queen Diva herself just happened to notice. "Not even being dramatic," @mariahlegend wrote, "but 'I don't like Mariah Carey' is literally the biggest turn off ever."

Actually, according to *two* people (at the very least). Shortly after @mariahlegend shared that thought with the world, Carey weighed in on the matter by retweeting and adding a very succinct reply. "Same," she wrote.

You heard it here first: Mariah Carey's biggest turn-off ever is when someone says, "I don't like Mariah Carey." Yep, that checks out.

Honestly, though, it's probably one of the more relatable things Carey has said in recent memory. Think about it: How would you feel if someone said they didn't like you? It certainly wouldn't be a turn *on* — that's for damn sure.

Carey has kind of been killing it on social media as of late, and has proven to be one of the most unintentionally hilarious celebrities out there. Take, for example, her response to the 10-Year Challenge meme back in January.

Remember when everyone was posting two, side-by-side photos of themselves? One was from 10 years back, and the other was present day? Well, Carey decided to join in on the fun, and her approach to the meme was somewhat ... let's say, unorthodox.

"I don't get this 10 year challenge," she wrote alongside two identical photos of herself. "time is not something I acknowledge," she added, followed by the shrugging emoji. "*Picture taken at some point prior to today." Bless her.

Then there was that time she confused The Chainsmokers with One Direction. During an interview on SiriusXM's The Morning Mash in February, as per E! News, Andrew Taggart and Alex Pall — the two guys who make up The Chainsmokers — recalled meeting Carey a while back.

"She was like, 'Dude, I love you guys,'" Pall said of their encounter with the singer. "And we were like, 'What? Wow, you know who we are? She was like, 'One Direction, right?'"

Once Carey caught wind of what had gone down, she decided to poke a little fun at herself. The star retweeted a clip of the band's interview, and added in the caption, "@TheChainsmokers of course I know you!! I love your song 'that's what makes you beautiful'!" followed by the laughing-crying emoji and the kiss-face emoji.

Over the last several months, Carey has turned into a true Twitter queen right before our eyes, Lambs. It's a welcomed transformation that continues to provide fans with lots of laughs, as well as — in the case of her most recent tweet — some very important information.