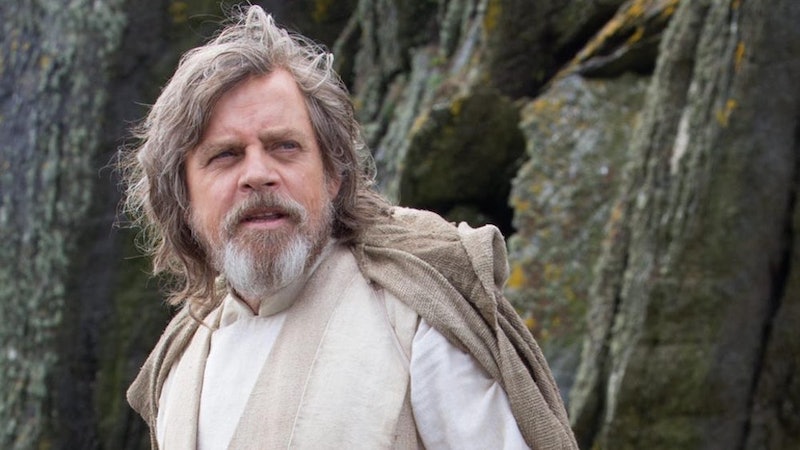 Luke Skywalker wasn't afraid, and it appears Mark Hamill isn't afraid either, otherwise he might not have dropped this possible Star Wars spoiler on Jimmy Kimmel Live! last night (March 19). Apparently, Luke Skywalker might be back in Star Wars Episode IX, according to Hamill. And it seems like the perfect time to start asking, does this finally mean that Luke is Rey's father?

It all started with a question from Kimmel about Hamill's beard situation in his upcoming series, Knightfall. The actor needed a long ZZ Top-like beard for the History Channel series, which is a historical fiction drama about the Crusades-fighting Knights of Templar, so he glued a fake beard over his real one, which was "terrible," Hamill said. Now, like Kimmel, you might wonder why wouldn't Hamill have just shaved his real beard off? "I had to keep the beard for something else," Hamill explained.

So, what is that other thing he needed the beard for? "Well it's NDA, that's non-disclosure agreement," Hamill said, turning to wink-wink at the audience, who most definitely knew what hush-hush movie he was talking about. "Don't quote me."

Of course, being a good late night host, Kimmel couldn't stop there and tried to use the Force to get some Star Wars Episode 9 clues. "So you were shooting simultaneously?" Kimmel asked. "Possibly," Hamill answered so Kimmel continued, "And we know then maybe that Luke Skywalker has a beard still and has a body still in the next movie?" It was there, though, he hit a dead end. "Which movie?" Hamill replied.

So, no, Hamill didn't really give anything away, beyond, you know, all but confirming that he's back. But, it's all part of his plan to keep Disney on their toes since he told Kimmel that he enjoys "driving the Disney executives crazy. What are they going to do fire me?" Seriously, let Mark Hamill have his fun and his dad jokes.

Especially, since his fun reveal means a fun surprise for anyone who saw the last Star Wars movie — Spoilers ahead for The Last Jedi — and thought that the very bearded Luke appeared to die in the final moments of the film where Luke fights off Kylo Ren using the power of the Force. Luke help the rebels escape without ever having to leave his cave. It's there we last see him, staring off at the double sunset in his meditation pose, only to disappear, his cloak dropping to the ground.

Previously, Hamill hinted that Luke could be back as a Force ghost in the new film like his mentors Obi Wan Kenobi and Yoda before him. Those two both "died" as Luke appeared to and were later able to show up again thank to the Force to impart a little wisdom. Luke might be about to do the same now that he's the Force ghost with possibly the most.

But, maybe there's more to Luke's story, like like perhaps, he's returning to reveal his parentage of a certain Jedi?The Last Jedi left fans thinking it was entirely possible that Luke is Rey's dad. After all, the two clearly have the power of the Force in common and he seems more than willing to set her up as his successor, which must mean something, right?

Right now, there's not much to know about the upcoming Star Wars movie, out Dec. 20, which has officially wrapped filming. Of course, Disney's trying to keep things hush-hush even if Hamill is making that hard. As this latest Star Wars trilogy gets ready to say goodbye, though, it seems fans might get one more chance to see Luke Skywalker — possibly, as a new dad.