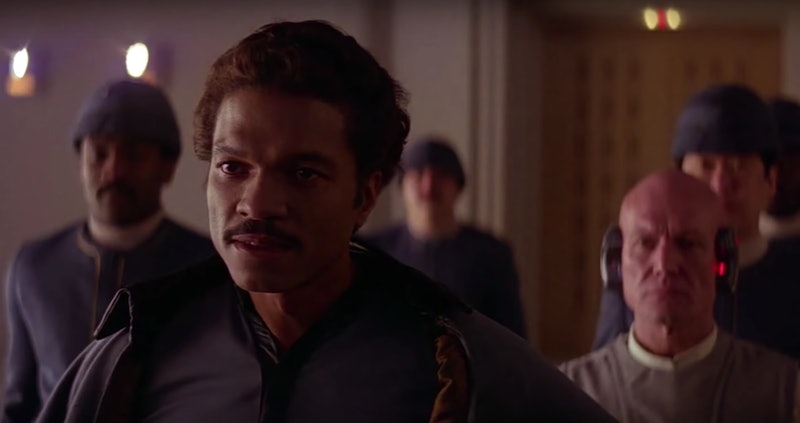 There's nothing like a franchise that can last for decades and continue to bring in surprises and Easter eggs. And no franchise does that better than Star Wars, as evidenced by J.J. Abrams' Lando Calrissian tease for Star Wars: Episode IX that's sure to make any fan of the originals — especially Empire Strikes Back — super happy.

In an interview with Entertainment Tonight at the 14th Annual Oscar Wilde Awards at Bad Robot on Feb. 21, the director of the next film in the franchise, Abrams, said the little bit he's allowed to about the series coming to an end. In doing so, he could only give praise for Billy Dee Williams coming back and playing Lando Calrissian, professional con artist — among other things — and longtime friend of Han Solo. "I gotta tell you, I had such unbelievable respect for him," Abrams said. "He was wonderful... He just had this aura around him. He's really an incredible man and an incredible actor." According to ET, Abrams said they had "a great time" on set, which wrapped filming around Feb. 15.

Williams' return was announced back in July and it only makes sense, with the original cast having such a huge role in the current films. Since his last onscreen appearance as Lando in Return of The Jedi, he's been very busy with movies and television, even reprising his role as the suave, caped Calrissian for The Lego Movie, a few Lego Star Wars TV movies and shows, and Star Wars Rebels. He's pretty active with the comic convention world as well, which of course fans adore.

ET also asked Abrams more about the upcoming Star Wars film, which is yet to be titled, but he was reluctant to share any details, as one would expect. But he does want fans to love it and feel like it's a good end to the Skywalker saga. "There are a lot of words that we all hope that you feel," he said. "And obviously the biggest, most important one I think is 'satisfied.'"

Abrams also talked about where it stands within the franchise. "I think that every movie is its own movie, and obviously this is a trilogy," he said. "We brought to that movie all the passion and hard work that we would have no matter what. So I think, you know, I think the story speaks for itself. I truly can't wait for you to see it."

Not much is known about the movie other than the cast at this point, which includes the return of Daisy Ridley, John Boyega, Adam Driver, and Oscar Isaac. Despite Luke disappearing at the end of The Last Jedi, Mark Hamill is also slated to be in this next film, along with Carrie Fisher, who will appear posthumously thanks to the help of unused footage. They'll also be joined by Star Wars newbies Keri Russell and Matt Smith, in undisclosed roles.

The wait for more information is going to be tough, but knowing that Williams and so many other stars will be part of the trilogy's conclusion definitely makes it easier to bear.