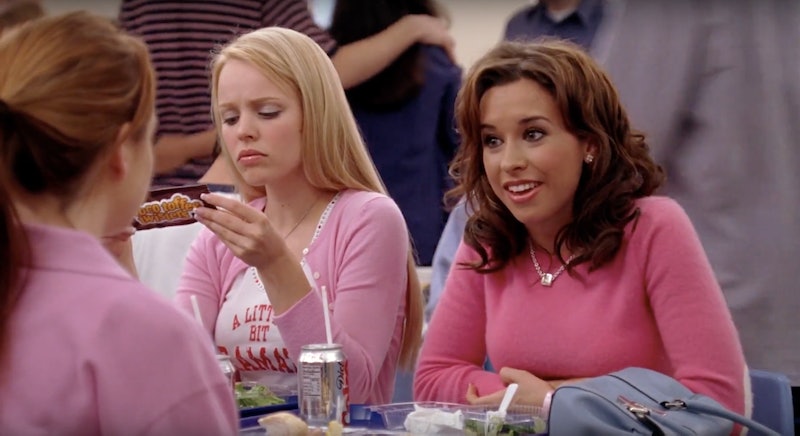 When Gretchen Wieners is introduced in Mean Girls, Damian teases, "That's why her hair is so big, it's full of secrets." The beloved teen movie may have come out a whopping 15 years ago, but the actor who played Gretchen, Lacey Chabert, still has a secret of her own. Although the actor is just as obsessed with Mean Girls as the rest of us, she reveals that there is one thing she wishes she'd done differently with the 2004 film — and no, it's not going back in time to correct Gretchen's use of "irregardless" or avoid kicking Jason in the face with the boombox.

"I will say, I wish I had kept a souvenir from the movie," Chabert says when visiting Bustle HQ in early March to promote her role in Hallmark's Crossword Mysteries: A Puzzle To Die For. "I kept a couple pieces of clothing. They were kind enough to give us those, but I wish I had kept the Burn Book or something to have to pass on to my daughter."

Totally understandable, considering that the Burn Book is a major part of Mean Girls — so much so that Ariana Grande even created her own version of it for her iconic "Thank U, Next" music video back in November 2018. Chabert has "of course" seen the video, and she thinks it's great. "She's such an incredibly talented woman. Everything she does is amazing," the actor says of Grande. "It's a great song and I love that my friend Jonathan was in it. I thought it was really well done." Yup, Jonathan Bennett, aka Mean Girls' Aaron Samuels, made a cameo in "Thank U, Next", too.

Watching Grande's music video isn't the only recent way Chabert has paid tribute to her Mean Girls roots. The night before our interview, she saw the Broadway musical, which premiered last April and was written by Tina Fey, just like the hit movie.

"It was so fantastic. They were all so talented. And Ashley Park who plays Gretchen was amazing," Chabert says. "It was very surreal for me to see a character that I had portrayed now being portrayed on Broadway in a show... It was just so exciting, and speaks to what an incredible script Tina wrote, and what a great movie Mark Waters directed."

It's clear the impact Mean Girls still has all these years later isn't lost on Chabert, who says, "The fact that people are talking about something we did 15 years ago is so flattering, and I consider it an honor to have been a part of it."

She loves the movie so much, in fact, that she can't even pick a top quote. "People always ask me what my favorite line is from the movie and it's impossible to choose. Truly, it's impossible," Chabert says. "There's so many great lines in that film, so much great dialogue written by Tina." She's not wrong — how often have you heard someone blurt out, "You can't sit with us!" or "She doesn't even go here"? Probably too many to count.

Chabert can answer one major Mean Girls question, though — what Gretchen Wieners would be up to in 2019. "She's the heiress to the Toaster Strudel empire," theorizes the actor. "I feel like maybe she married Jason and they have a bunch of babies."

That sounds about right. And if Gretchen does have a bunch of babies, hopefully she'll fulfill Chabert's wish and pass on the Burn Book to them.

More like this
Amanda Seyfried Reflects On 'Mean Girls' & "Gross" Remarks That Men Made After It
By Jake Viswanath
Sandra Bullock, Girlboss Extraordinaire
By Matt Harkins & Viviana Olen
At 28, Minnie Driver’s Personal Life Was “Falling Apart”
By Kate Dwyer
'Dirty Dancing's Jennifer Grey Wants Harry Styles To Be The Sequel’s Love Interest
By Grace Wehniainen
Get Even More From Bustle — Sign Up For The Newsletter