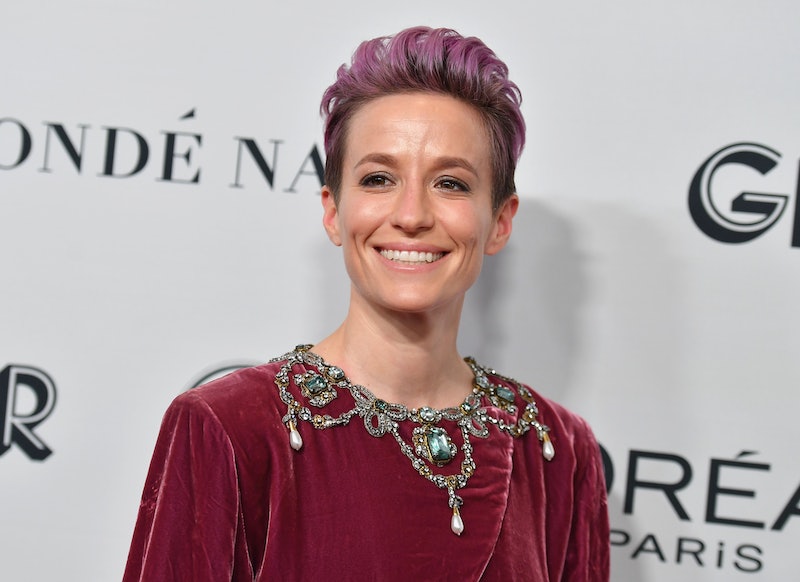 Megan Rapinoe knows goals — and her latest goal is helping one Democratic presidential candidate make it all the way to the White House. On Friday, Dec. 13, Megan Rapinoe endorsed Senator Elizabeth Warren for president in the 2020 election, explaining on Twitter and Instagram she had been won over by the senator's "bold" policies. "I truly believe the best things in life are a result of being bold and being real," Rapinoe wrote on social media. "I’m proud to endorse Elizabeth Warren today, for being bold, for being real, for listening to ALL of us, and for being prepared to navigate the unique challenges we face today as a country."

Rapinoe also shared a video on Twitter of a phone call she had with Warren, shortly after she was named the Sports Illustrated Sportsperson of the Year. "I've been following what ... your campaign is doing," Rapinoe said during the call. "I just don't think we can get to a better place by walking this moderate line, so I just appreciate you being out front and being big and bold with that." The soccer star also encouraged Warren with the same phrase that she and her teammates use before every game: "We have a little saying on the National Team that we like to say ... LFG. So, let's do this."

Warren responded to Rapinoe's endorsement with a statement of her own, in which she described the World Cup winner as "a champion of justice on and off the field and a role model for women and girls everywhere." She continued, "I am honored to have her endorsement, and look forward to fighting alongside her for big, structural change."

Rapinoe was thrust into the spotlight this year as a member of the World Cup-winning United States Womens National Soccer Team, and has used the renewed attention on her and her teammates to advocate for issues that are important to her. Revealing her decision to protest the National Anthem in solidarity with Colin Kaepernick, Rapinoe told the Associated Press in 2016, that "being a gay American, I know what it means to look at the flag and not have it protect all of your liberties." She continued, "It was something small that I could do and something that I plan to keep doing in the future and hopefully spark some meaningful conversation around it."

In addition to issues of racial and LGBTQ+ equality, Rapinoe has also been a leading voice in the fight for equal pay, and has been raising awareness for the vastly different ways the women's and men's national soccer teams are treated by the league. In March, she and four other USWNT players — Carli Lloyd, Hope Solo, Alex Morgan, and Becky Sauerbrunn — filed a complaint with the Equal Employment Opportunity Commission, arguing that the U.S. Soccer Federation pays the female team far less than their male counterparts.

"My big, I don’t know, 'message' right now is that every person has a responsibility to be a participant in this society and make it a better place for everybody, in whatever capacity they can," Rapinoe told The New York Times in July, about her commitment to fighting for her political beliefs. "I’m just trying to do the best that I can to inspire people to feel confident that they have the ability to be an active participant in this country, in their community, in their family."

Right now, it seems that Rapinoe's main way to be an active participant is by endorsing a presidential candidate that she believes in, and encouraging others to educate themselves on the issues and do the same.