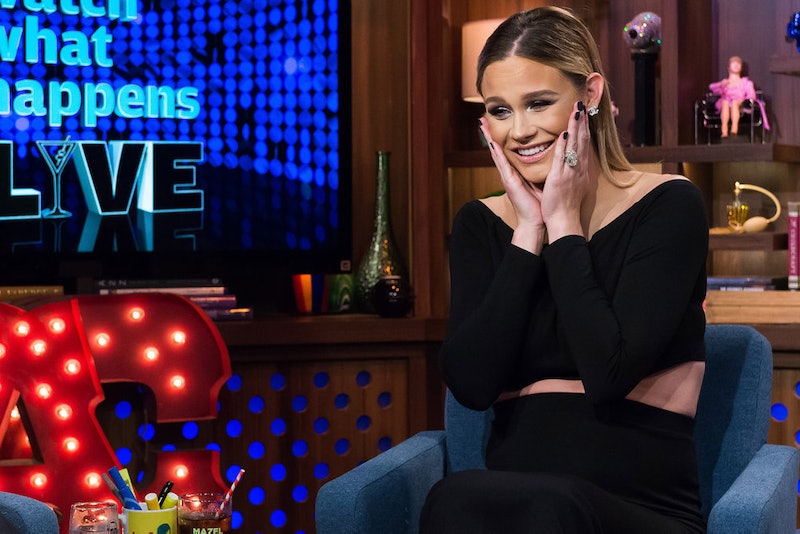 This Real Housewives of Orange County star isn't going anywhere. Meghan King Edmonds is returning to RHOC for Season 12, she confirmed on Instagram Thursday. Of course, she made the big announcement by sharing the most adorable photo of her family. The image features herself, her husband, Jim Edmonds, their little girl, Aspen, and their sweet pup, Girly Girl. It is seriously cute and will make you wish the newest season of RHOC was already here, because who doesn't want to see Baby Aspen in action?

UPDATE: Meghan has since removed the photo of herself and her family with the RHOC announcement. According to a source, Bravo will be making a casting announcement early next week. Bustle has reached out to Bravo for comment.

EARLIER: "I'm back on #RHOC season 12 with two new additions!" she wrote next to the image. "Welcome Baby Aspen and @therealgirlygirl and of course my boyfriend @jimedmonds15! I am still in shock that I survived season 12 with an infant and a puppy [flushed face and heart eyes emojis] Who's surprised I'm back? Who already knew?"

The reason Meghan is probably asking those questions is because there were rumors that she wasn't returning to the hit Bravo series. In January, Us Weekly reported that "multiple sources" confirmed she would not be coming back for another season. Well, either those sources were wrong or things changed. Unlike Heather Dubrow, who announced her departure in January, Meghan will very much be a part of the new season when it returns in summer.

Season 12 is shrouded in mystery. If you haven't heard, Andy Cohen told Bravo's The Daily Dish in May that some familiar faces will be making a comeback. "And some old Housewives [are] returning and it's really good," he dished. One "old Housewife" who fans will once again see is Season 8's Lydia McLaughlin. Bravo revealed her addition in May. If anyone else from way back when is coming back, that remains unknown. As for Season 11 newbie Kelly Dodd, well she is once again a Housewife, Cohen confirmed to The Daily Dish. "I think you're gonna be surprised by Kelly Dodd this season," he said.

Whoever else Season 12 brings, I'm excited to see Meghan — and her beautiful family — will be a part of it.