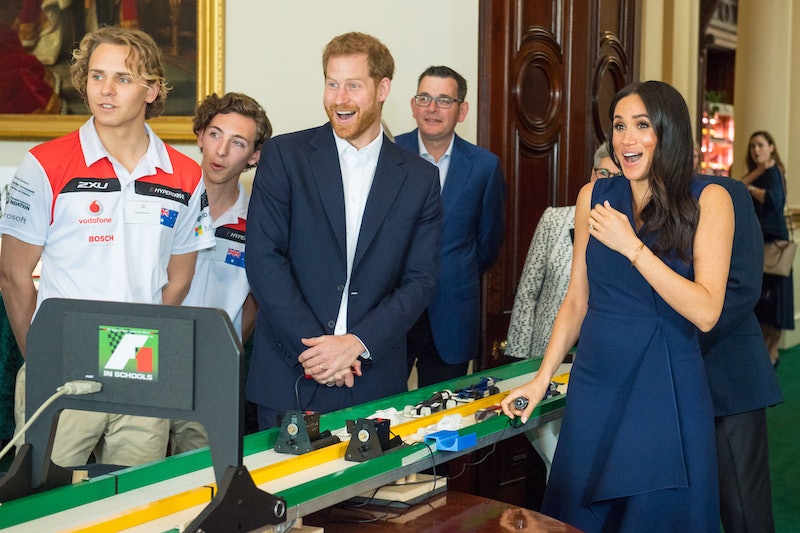 Seeing as it is Halloween time, people are bound to get frightened at some point. Well, Meghan Markle accidentally got scared during her royal tour with Prince Harry making for a really funny moment. As reported by Entertainment Tonight, the Duke and Duchess of Sussex met with Trinity Grammar School students, who also work with Formula 1 cars, at the Government House in Melbourne, Australia. Their meeting resulted in Markle jumping and screaming, while Harry looked on laughing.

During a model car demonstration with the students, the former Suits star was given a launcher that she was instructed to press in order start the model cars. As you can watch in the video below shared by royal commentator and contributor Omid Scobie on Twitter on Wednesday, Markle patiently waited until she was told to press the start button. After she pressed it, she and Harry stood patiently for a few moments waiting for something to happen and then out of nowhere Markle got quite the shock.

Before she knew it, a loud bang occurred and smoke appeared. Like most people would do, especially those who weren't expecting that kind of reaction from the cars, the 37-year-old let out a small scream and jumped. She then covered her mouth and laughed so hard. "I was not expecting that!" she declared.

Upon Markle's reaction, Harry, of course, couldn't help but let out a huge laugh. It really was a funny moment. Harry also joked with Markle, "Wasn't quite expecting that." Also, if you watch closely, it looks like Harry flinched a little bit, as well, after the loud noise went off and the smoke appeared. Yeah, Markle wasn't the only one who got scared.

This is Markle and Harry's first royal tour as wife and husband. Their tour has also already been extremely memorable, and not just because of the Duchess of Sussex accidentally getting scared.

On Monday, Markle's pregnancy was announced. She and Harry are expecting their first child together in spring 2019. "Their Royal Highnesses have appreciated all of the support they have received from people around the world since their wedding in May and are delighted to be able to share this happy news with the public," Kensington Palace said in a statement on Oct. 15.

The two have also had several adorable interactions during their first royal tour stop in Australia, too. For example, on Wednesday, Markle and Harry hugged a little boy resulting in the cutest moment ever.

As you can see in the above video tweeted by ABC News, a boy named Luke Vincent hugged the couple so tight and also presented them with bouquets of flowers. Vincent couldn't stop touching Harry's beard and even hugged the prince multiple times. Of course, Harry wasn't bothered by it one bit making the moment even sweeter. You could also tell Markle was truly touched by Vincent and his love for the couple, but even more so Harry. According to ABC News, Vincent's mother revealed her son's favorite person is Santa Claus, which is probably why he was enamored with Harry's beard. It doesn't get cuter than that.

The royal couple's tour just started and it's already been a huge success. Who knows what's ahead for them, but Markle is probably hoping she won't be unintentionally scared again. That said, let's hope at least more hugs and laughter are ahead.