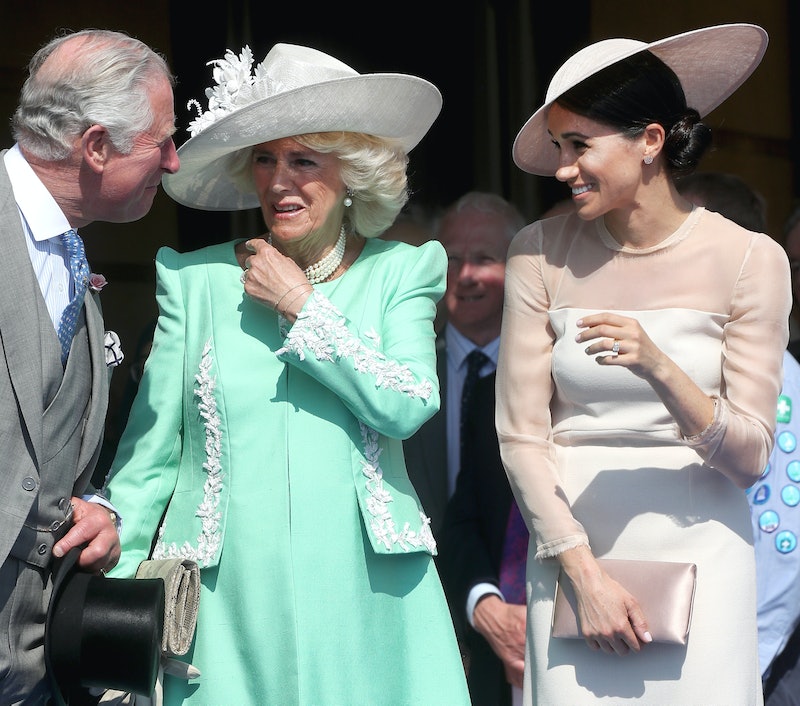 It might be another case of royal recycling — when it comes to fashion, at least. Meghan Markle may have lent one of her handbags to Camilla Parker-Bowles. Parker-Bowles, the wife of Prince Charles and stepmother to Price Harry, and Markle clearly share good taste in accessories. Perhaps the ladies have grown so close that they are borrowing one another's bags or are influencing one another's style? Maybe Markle's bag inspired CP-B to nab one of her own, especially since the bag is crafted by a charity-focused brand? The "Meghan Markle Effect" can certainly impact the royal family itself.

PEOPLE reported that Parker-Bowles was toting the affordable DeMellier London Mini Venice purse in green while out and about in London earlier this week. Markle carried the same forest-green, top handle bag with a tassel a year ago while visiting Cardiff. While Parker-Bowles paired her bag with a matching two-piece set consisting of a blazer, skirt, black tights, and heels, Markle carried hers while wearing a belted blue coat and black pants.

The bag is inexpensive considering that the royal family is able to afford much pricier pieces.

Markle and Parker-Bowles share a fondness for a bag that also does good. DeMellier operates the A Bag, A Life initiative, where every bag purchased funds a vaccine and treatments to save the life of a child in need.

Check out Parker-Bowles and her mostly monochromatic ensemble, complete with the DeMellier bag. And a pretty awesome horse.

Here's another look at the full presentation and the back side of the bag.

What a chic and practical bag. The top flap is fun and modern while the overall structure is classic. But most importantly, this bag helps others. It's a passive way to do good in an important way.

The Mini Venice is supremely versatile, too. It can be worn as a crossbody, over the shoulder, or toted around by its handle as Markle and Parker-Bowles seem to prefer.

It also comes in 16 colors and the brand offers complimentary monogramming. No wonder the royals have an affinity for it.

The Mini Venice in Forest Grain
DeMellier Lonndon
This bag is chic and classic from top to bottom.

While it's not known if Parker-Bowles actually borrowed Markle's bag or if she purchased one of her own, the fact that she carried it still generates a lot of press for the charitable brand. It also reminds us that the royal family isn't above fashion recycling and intra-family inspiration.

Kate Middleton has been known to wear outfits multiple times. She wore an Alexander McQueen ensemble to Markle's May 2018 wedding that she had already worn twice before. The magnificent Middleton also recently re-wore a bright purple, Oscar de la Renta suit from back in 2017. She apparently puts ensembles back into rotation and appreciates the fact that a beautiful outfit deserves to be worn more than once. Plus, so many of her clothes are classic and timeless that they can be worn for years after their debut. It also sends a message that the royal family, despite their status, might be more like the rest of us than we'd initially think.