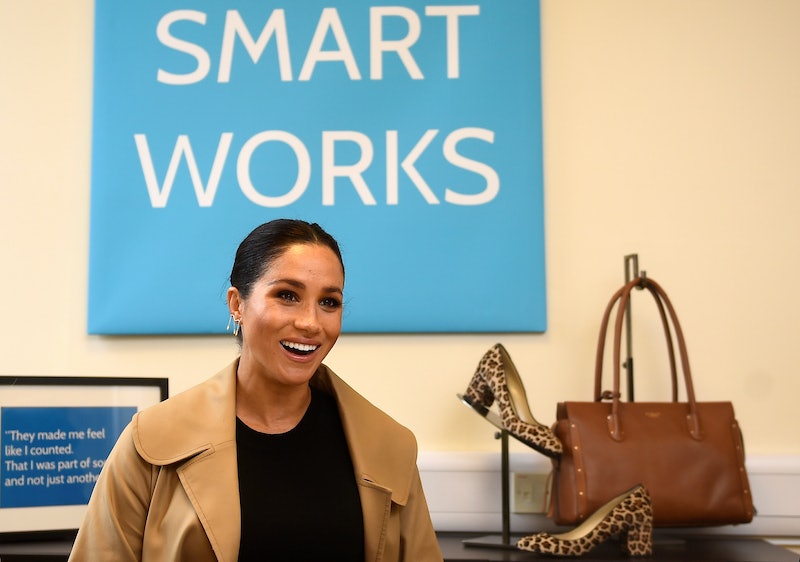 Meghan Markle is a busy woman. Between her royal duties as Duchess of Sussex and raising her son Archie, you'd think she'd be exhausted, but it seems that the Duchess still has a lot left to give. In her Vogue UK story, Meghan Markle's clothing collection benefiting Smart Works was announced, and the project is perfect for combining the Duchess of Sussex's two loves: fashion and philanthropy.

According to Harper's Bazaar reporter Omid Scobie, Meghan Markle revealed in her Vogue UK story that she has created a capsule collection for British department stores Marks & Spencer and John Lewis & Partners. For the fashion-based project, Markle worked with friend and fashion designer Misha Nonoo to create the pieces which will be sold in stores later this year, but the capsule collection is more than just a side project for the Duchess.

If you're familiar with Markle's charity work, you may already know that one of her Royal Patronages is an agency named Smart Works. The organization works with unemployed women on everything from interview skills to how to dress in the work place. Markle visited the charity back in January where she helped to style women who were there. Now, she's doing much more than styling the women at Smart Works. Markle's capsule collection will actually benefit the organization directly.

According to Harper's Bazaar, the collection will benefit Smart Works on a "one-for-one basis." Essentially, for every piece that's purchased from the collection, a piece will be donated to Smart Works where the unemployed women they assist will be able to wear the workwear to future job interviews.

Markle's announcement of the project in British Vogue also makes perfect sense. The Duchess of Sussex guest edited the September issue of the magazine alongside editor Edward Enninful. In her role, Markle chose to highlight female change makers, women who have been influential to the Duchess and are impacting their communities and the world. Cover stars included climate activist Greta Thunberg, actor Laverne Cox, and New Zealand Prime Minister Jacienda Arden.

News of Markle's work with the magazine originally broke back in June but was unconfirmed by Vogue. Fans of Vogue UK editor Edward Enninful, though, may not have been as suspicious of the news that he chose Markle to help with the magazine's most important issue. According to an interview with The Evening Standard back in January, Enninful was open about his desire to have Markle on the cover.

While Markle chose to remain off the cover, citing that it would be "boastful" to do so, her work with Enninful on the issue is just as meaningful and exciting to fans of the Duchess and her work.

While Markle may no longer be working with Vogue as a guest-editor, she is still creating change in the fashion industry and helping women. Markle's capsule collection benefiting Smart Works is the perfect example of how she fits in with the change makers she selected for the magazine's cover, even if she wouldn't place herself on the cover with them.

More like this
Harry Styles’ Red Carpet Looks Have One Thing In Common
By El Hunt
15% Pledge Director LaToya Williams-Belfort On The Impact Of Supporting Black Business
By Dominique Norman
Bella Hadid's Best Runway Looks From Paris, Milan, & More
By Allie Fasanella
Gigi Hadid Has Been Wearing UGG Boots Nonstop At Paris Fashion Week
By Dominique Norman
Get Even More From Bustle — Sign Up For The Newsletter