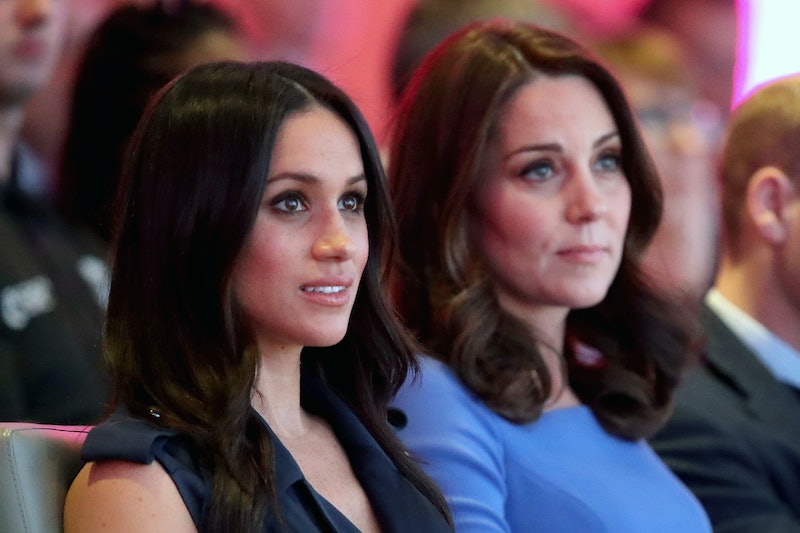 Wimbledon's ladies singles final match on Saturday, July 14 is about to get a whole lot more royal, thanks to two special guests. As People reported, Meghan Markle and Kate Middleton will go on their first solo outing together during the Grand Slam event. So get ready for the Duchesses to take Wimbledon and cheer on Markle's good friend, Serena Williams, in the process.

The news was first tweeted by Kensington Palace on July 12, revealing that the Duchess of Cambridge and the Duchess of Sussex would attend the occasion together, without their princely husbands. Each of the royals have a particular reason for attending the event (besides some sisterly bonding, of course). As the palace stated, Middleton is a Wimbledon patron and has been for about a year now. According to ESPN, she took over the role, in which she's tasked with handing out trophies and greeting many past and present tennis players, from Queen Elizabeth. Since she's a patron of the athletic event, it's only natural that she'd attend this important final match. And it's so fun that her new sister-in-law could join her.

As for the Duchess of Sussex, she won't only get to hang out with Middleton, but she'll also get to root on her friend during the outing. As previously mentioned, all-time tennis great Williams will be competing in the ladies' singles final against Angelique Kerber. Markle is longtime friends with the athlete ever since they met back in 2014 at DIRECTV's Celebrity Beach Bowl, per E! News. The Duchess even wrote about her friendship with the tennis player on her since-deleted website, The Tig.

She said, "We hit it off immediately, taking pictures, laughing through the flag football game we were both playing in, and chatting not about tennis or acting, but about all the good old fashioned girly stuff." Williams supported the former actor at her May wedding to Prince Harry. So it seems like Markle is returning the favor this time around.

This Wimbledon outing wouldn't mark the first time that the Duchesses have gone attended an official engagement together. In fact, they've been to many of the same outings ever since Markle was welcomed into the family following her engagement to Prince Harry. In the past year alone, they attended the Royal Foundation Forum back in February and, more recently, both appeared alongside the rest of the royal family at the centennial celebration for the Royal Air Force. Although, at both of these previous events, and all of the others they've appeared at, the ladies attended alongside their husbands.

Middleton isn't the first member of the royal family that Markle has gone on a solo engagement with. In a move that truly cemented her status as the Queen's unofficial bestie, the Duchess of Sussex attended a solo trip with the monarch to Cheshire on June 14. According to Sky News, the pair unveiled a plaque and cut a ribbon to honor the brand new Mersey Gateway Bridge in the town. They also attended a performance at Chester Town Hall, which Markle, considering her acting roots, must have loved. The occasion marked the new royal's first official event without her husband and included a very special first for her, as well.

According to Express, the duo journeyed overnight to the location via the royal train. The train is mainly in use for the senior royals (the Queen, Prince Philip, Prince Charles, and the Duchess of Cornwall), but there was apparently an exception made for Markle. Surprisingly enough, even her husband, Harry, hasn't ridden the train yet. So, it was definitely an all-around special occasion for her.

It's nice to see the Duchess of Sussex really embracing her new role with some established members of the family by her side. Not only is she embracing her role, but both of these fabulous solo outings show that Markle's new family has embraced her into the official royal fold, too.