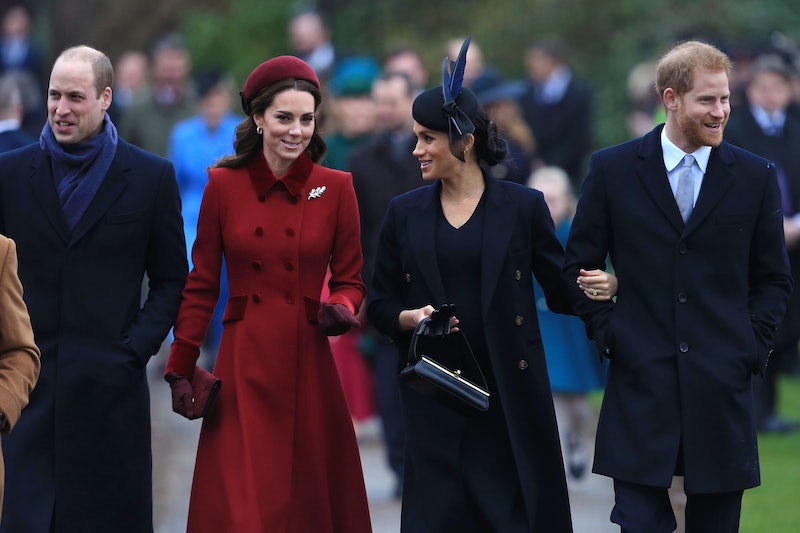 These British royal family members are there for each other when it matters most. Meghan Markle and Prince Harry are getting parenting advice from two important people in their lives — Kate Middleton and Prince William. According to Us Weekly, Middleton and William, who definitely know a thing or two when it comes to parenting, have been giving Markle and Harry helpful baby tips in preparation for the arrival of their first child, who is due in late April/early May.

A palace insider told Us Weekly about the Duke and Duchess of Cambridge, "Both of them have spoken to Harry and Meghan about parenting, giving a few bits of advice ahead of the arrival of their baby." The source added about the parents of three, "Having been through it a few times, their 'tricks of the trade' have definitely been appreciated. Harry and Meghan are totally open to all help and advice!"

Seeing as William and Kate are parents to Prince George, Princess Charlotte, and Prince Louis, they are no strangers to parenthood. If anyone can give the Duke and Duchess of Sussex beneficial lessons on welcoming a baby, especially as first-time parents, into the world, it's Harry's brother and sister-in-law.

Despite the so-called feud rumors that have been circulating for far too long involving Markle and Middleton, the Duchess of Cambridge couldn't be more excited for her sister-in-law — and for her children to soon have a cousin to play with.

As Middleton told the public last November in Leicester, England, "It's such a special time to have little kiddies, and a cousin for George and Charlotte, as well, and Louis. It’s really special."

If anyone can help Markle when it not only comes to being a mom, but also raising children in the public eye, it's Middleton. She did the same for her sister, Pippa Middleton. In April 2018, Us Weekly reported Middleton gave her sister advice prior to her becoming a mom for the first time. (Pippa gave birth to her first child, a son, with husband James Matthews last October. They reportedly named him Arthur Michael William Matthews.)

At the time, a source told the publication, "Kate has so much knowledge to share. She’s a walking baby encyclopedia at this point!"

And when or if Markle faces parenting problems, she can certainly lean on Middleton, who knows all too well the struggles that come with motherhood. Like Middleton recently said in January while visiting the charity Family Action in London,

"It’s so hard. You get a lot of support with the baby as a mother particularly in the early days, but after the age of 1 it falls away. After that there isn’t a huge amount — lots of books to read. Everybody experiences the same struggle."

In addition to help from Middleton and William, the royal couple is planning on having Doria Ragland, Markle's mother, move in with them at Frogmore Cottage to help with the baby, rather than hiring a nanny immediately. Katie Nicholl, Vanity Fair's royal correspondent, reported in January that multiple sources said Markle and Harry "do not plan to hire a nanny or nurse initially, and will instead rely on the help of Meghan’s mother."

Harry and Markle are lucky to have so many loved ones around them willing to help during such an exciting, yet also probably somewhat stressful, time.