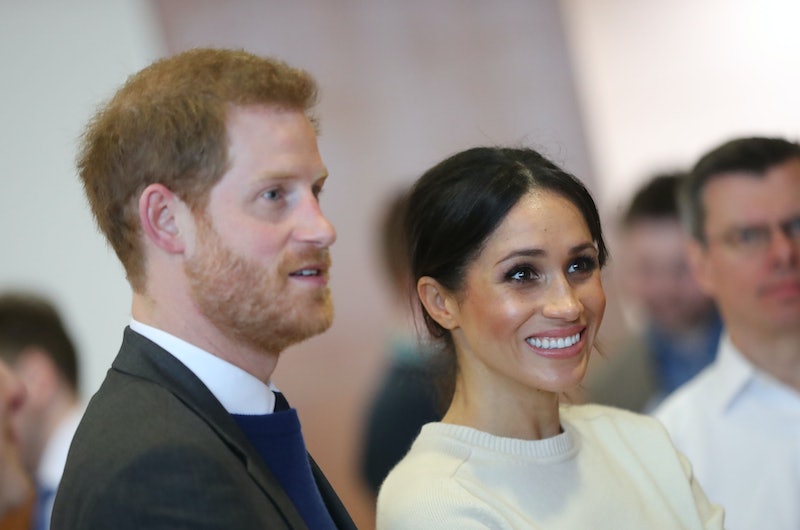 Now that it's April, we can officially say that Prince Harry and Meghan Markle are getting married next month. It's hard to believe that May 19 is almost here, but because of that, the way the couple spent their last unmarried holiday makes a lot of sense. Markle and Harry skipped out on the family Easter church service this year, but as it turns out, they weren't actually being as rebellious as you might think.

According to Hello!, Queen Elizabeth attended service at St. George's Chapel without her grandson and his fiancée in tow on Sunday. It's not like she was lonely, since plenty of other royal family members (including Prince William and a very pregnant Kate Middleton) did accompany her. Royal sources, whoever they may be, told the magazine that Markle and Harry instead to chose to celebrate their first engaged Easter separately and privately, and as Elle pointed out, Harry hasn't attended church with his family on Easter for awhile, so it seems like he was just carrying out his own tradition.

So far, there's no word on what Harry and Markle did instead, but can anyone blame them for wanting the day off? They've made countless public appearances since their engagement was announced, and it seems like the media frenzy surrounding them is only going to get bigger as the wedding continues to draw closer.

Hello! also added that the Queen was joined by Princesses Beatrice and Eugenie, as well as Prince Edward, Sophie, the Countess of Wessex, and their children. So, even though Markle and Harry were probably missed, Queen Elizabeth did get to celebrate the holiday with most of her fam. And after the service, the Queen met with children outside of the chapel before going home, so it seems like it was a pretty fun day.

Seeing Middleton there was surprising, since she made her final official appearance before welcoming her baby just a little over a week ago. But being due potentially any time in the next month didn't stop her from making it out of the house for Easter, bump and all. And yes, as usual, she looked fabulous.

Even though Markle and Harry weren't there, it seems like they've been busy working on last minute wedding plans. On Sunday, Kensington Palace announced that they'd chosen their florist, Philippa Craddock, who has created arrangements for brands like Hermes and Dior in the past.

"Where possible, Philippa will use flowers and plants that are in season and blooming naturally in May, including branches of beech, birch and hornbeam, as well as white garden roses, peonies and foxgloves," the announcement said. "[Royal Parks] will supply some pollinator-friendly plants from their wildflower meadows that will be incorporated into the floral designs. These plants provide a great habitat for bees & help to nurture and sustain entire ecosystems by promoting a healthy & biodiverse environment."

Even beyond the floral arrangements being designed, the next month and a half will probably be a very busy one for Harry and Markle as they prepare to tie the knot, so it's great to hear that they were able to take some time for themselves, out of the public eye. It's hard to imagine how stressful planning a wedding that the world will watch must be (especially with all the royal protocol involved), so if they wanted to take this Easter off, who could fault them?

Maybe next year, Markle and Harry will mark their first Easter as a married couple by attending service with the Queen. But long before that, it's going to be fun to see where the next month takes them.