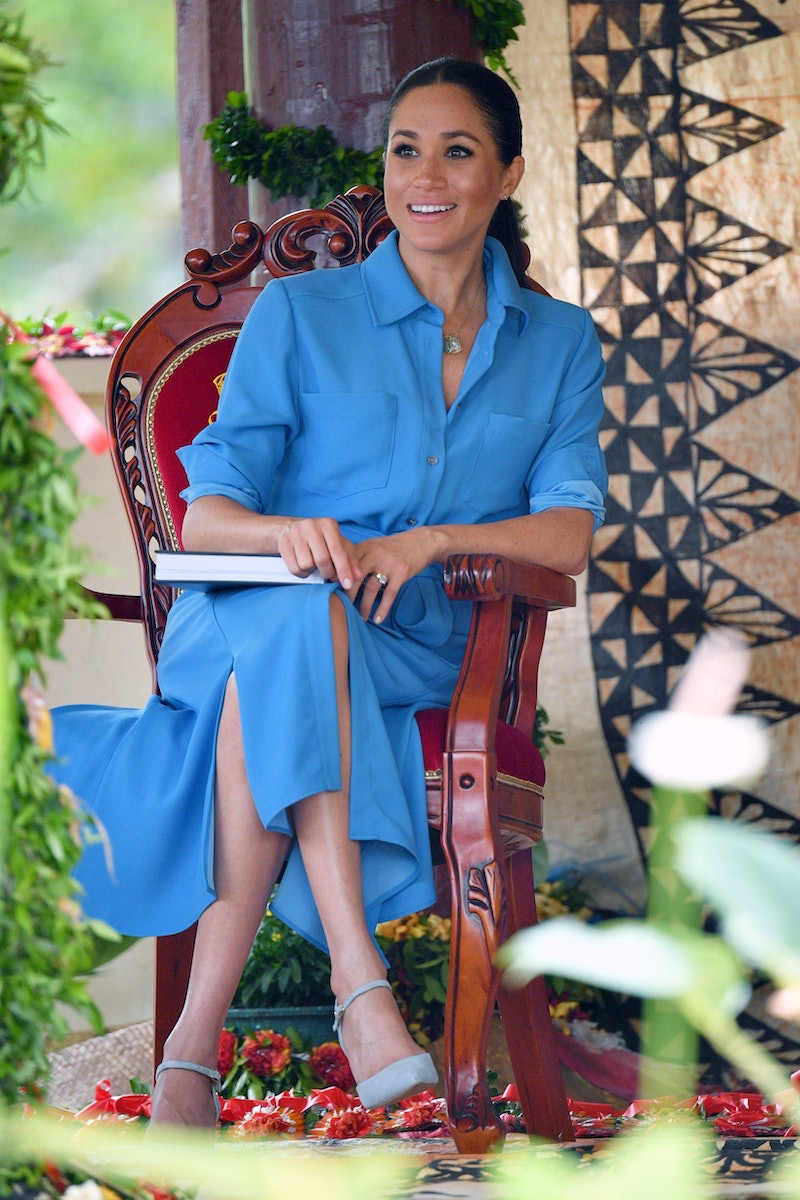 Another day, another fabulous outfit courtesy of the Duchess of Sussex, Meghan Markle and husband Prince Harry's Australian royal visit has provided a plethora of fashion inspo for royal style lovers. There's even been some affordable finds, and the latest is Meghan Markle's Banana Republic pumps. The duchess appeared in Tonga wearing a pair of ultra affordable heels, and the good news is that they're still available and under $100!

According to website What Meghan Wore, Markle stepped out in Tonga wearing a gorgeous blue shirt dress by Veronica Beard. While the frock is far from her most expensive choice ringing in at $595, her ensemble had an ultra affordable component to it that you can still shop.

The style site, alongside Footwear News, reports that Markle was wearing cut-out pumps from none other than office attire staple Banana Republic. The duchess's Madison 12-Hour Pump was in a light blue-grey hue, and it seems that the exact color has sold out on the brand's website. Don't worry, though. The style is still available in black, and the heels only cost $89.50! If you want to shop the style, move fast. Some sizes have already sold out, and if you want Markle's blue-grey version, keep an eye out because there's always hope for a restock.

The pumps aren't just affordable and stylish, though. They're apparently designed for comfort. According to the Banana Republic website, the pumps are called a 12-hour style because they're designed to be able to be worn for that long. Given that the duchess has just announced her pregnancy — and the fact that she's on her feet all day greeting diplomats and admirers — a comfortable shoe is probably a must for her.

As it turns out, the 12-Hour Pump comes in a multitude of styles that you can shop. From a classic pump design to the cut-out version Markle wore to an asymmetrical strap version as well.

Of course, the Banana Republic heels are the only affordable items Markle has worn while on her royal visit to Australia. The trip has been a feast for fashionable eyes and frugal wallets as well.

Markle's Banana Republic pumps weren't the only affordable shoe choice she made, though. While greeting fans in Australia and visiting a zoo, Markle changed into a pair of Rothy's flats that retail for less than $150. Plus, she even wore them twice while in the country.

While Meghan Markle's style choices may sometimes lean toward more luxury designers and goods, she's still no stranger to affordable brands. As it turns out, duchesses are more like us than you may have thought. Whether you're a flats kind of person or love a good pump, Markle's given royal watchers plenty of style inspo while in Australia.

More like this
Harry Styles’ Red Carpet Looks Have One Thing In Common
By El Hunt
15% Pledge Director LaToya Williams-Belfort On The Impact Of Supporting Black Business
By Dominique Norman
How To Wear A Bucket Hat Like Rihanna, Dua Lipa, & More
By Allie Fasanella
The 30 Best Fall Fashion Finds, Straight From Bustle Editors
By Kelsey Stiegman
Get Even More From Bustle — Sign Up For The Newsletter