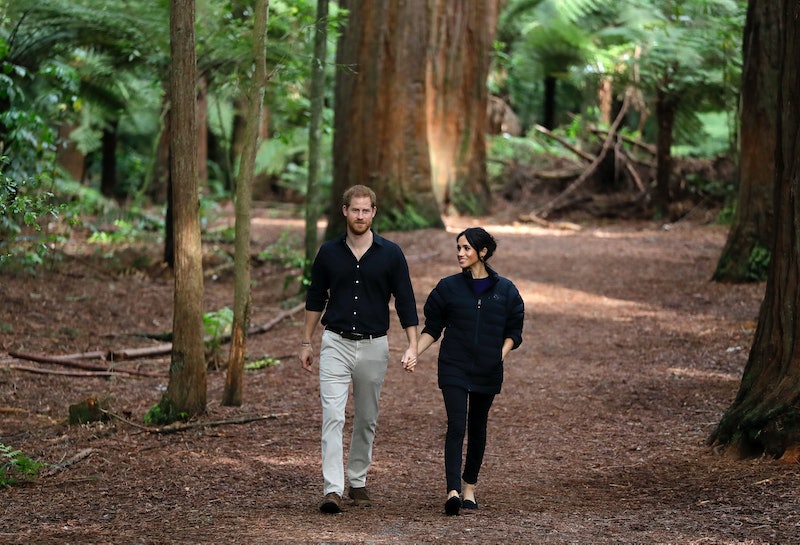 Meghan Markle's no stranger to outfit repeating. In fact, she just finished a royal tour where nearly everything she wore she'd donned before. One item she seems to repeat most often are shoes. Right now, Meghan Markle's favorite flats are back in stock on the Birdies website.

According to a tweet from Markle-focused fashion blog Meghan's Mirror, the Duchess of Sussex's favorite black Birdies flats are now back in stock on the brand's website. The hybrid slipper meets flat has been absent for some time now, but according to an Instagram post from the brand, Birdies decided to bring back the popular shoe thanks to customer demand (and probably a little bit of the Meghan Markle effect, too).

The Blackbird features the same 7-layer comfort technology as the brand's Starling and Heron flats, but unlike the other designs, the Blackbird comes only in, well, black. The new (but old) addition to the brand's line-up also features calf hair, a material only found on one other shoe (the Cheetah Starling flat).

Most importantly, though, the Blackbird is the exact flat that Meghan Markle loves. While yes, you could purchase Birdies before to emulate her style, the Duchess of Sussex owns the Blackbird, and now you can, too, thanks to the brand's restock.

Markle first became known for wearing the brand long before she was Duchess of Sussex, though. According to Town & Country, Birdies gifted Markle a pair of flats when she was a cast member on Suits. In an interview with the publication, co-founder Bianca Gates explained that the then actress made the perfect brand ambassador not just for her role on television but for her style and humanitarian work as well. Now, she's wearing Birdies on a global platform.

The Duchess was first spotted in the shoe (in a royal capacity, at least) when she and Prince Harry were on their royal tour of Australia. While touring the Redwoods Treewalk Rotorua, Markle slipped into a pair of Birdies presumably because, well, nature. No one wants to wears Aquazzura pumps in a forest.

Markle then donned the slippers again while with Prince Harry in Morocco, and according to Meghan's Mirror, these aren't the only times she's worn them abroad. The website also reports that (while not easy to spot) Markle also wore them on yet another royal tour: the pair's most recent South Africa trip.

When it comes to comfy travel style, Markle seems to rely on her Birdies Blackbird flats. Now, the shoe is back on the brand's website, and let's be honest, if they're comfortable enough for royal tour duties, you've got to get a pair for yourself.

More like this
Harry Styles’ Red Carpet Looks Have One Thing In Common
By El Hunt
15% Pledge Director LaToya Williams-Belfort On The Impact Of Supporting Black Business
By Dominique Norman
Gigi Hadid Has Been Wearing UGG Boots Nonstop At Paris Fashion Week
By Dominique Norman
How To Wear A Bucket Hat Like Rihanna, Dua Lipa, & More
By Allie Fasanella
Get Even More From Bustle — Sign Up For The Newsletter