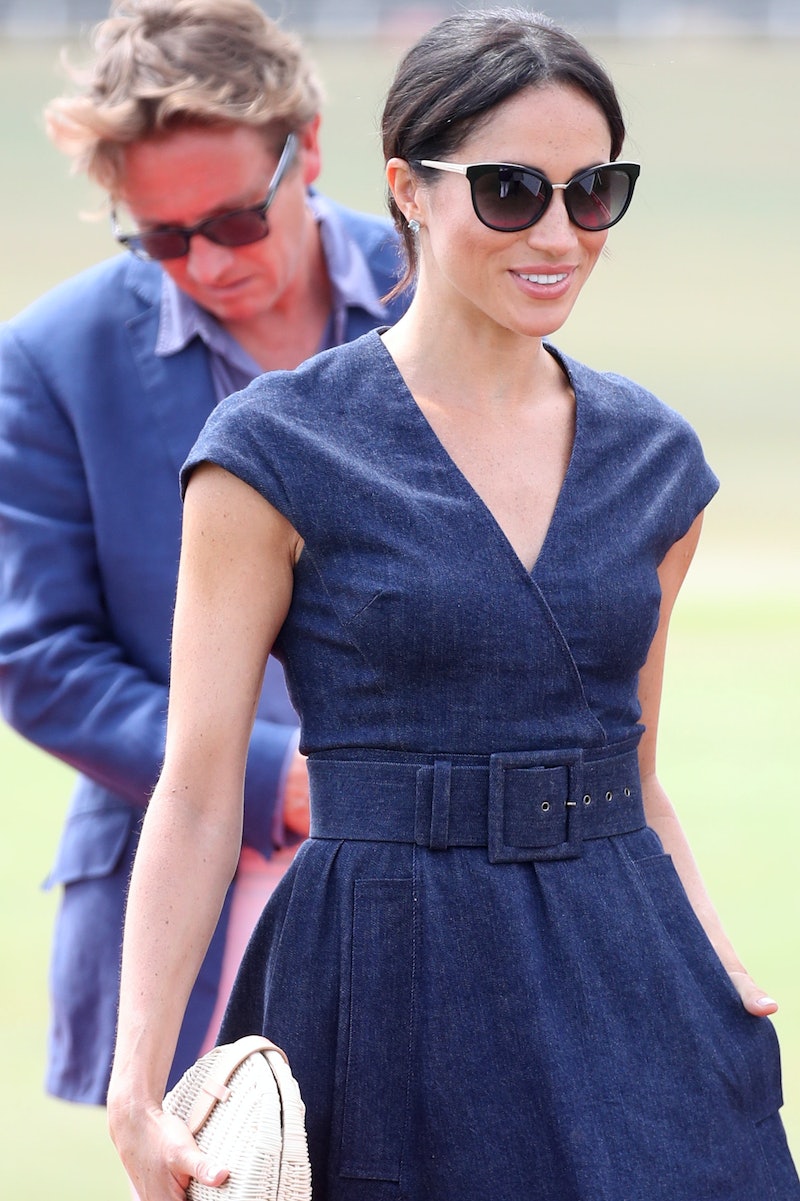 It's probably totally against the royal rules, but Meghan Markle should consider running a fashion blog. The trendsetting royal darn near breaks the internet every time she steps into the public view, as everyone and their mama attempts to imitate her style. When Meghan Markle's J. Crew wicker bag accompanied her on her latest outing, it was proof that the newlywed is forever hip with her wardrobe.

It's always a good day when the Duke and Duchess of Sussex make an appearance. Prince Harry participated in the Sentebale ISPS Handa Polo Cup to help raise funds for children affected by the AIDS epidemic in Lesotho and Botswana, and his leading lady was there to cheer him on. Naturally, Markle wasn't donning just any old fashions. The fashion influencer of a royal showed up looking as fab as ever in a denim dress and the cutest nude heels. But it was her stylish arm candy that really stood out most.

Markle not only abided by royal fashion protocol by toting a clutch, but also rocked one of the summer's hottest sensations. 'Tis the season of the straw bag, a trend you may have noticed has been popular amongst the Instagram crowd, and now, the most talked about Duchess.

Markle didn't just try the wicker bag trend out for herself, she completely owned the look. The Duchess' woven clutch added a summery touch to her chic ensemble, and she looked like something from straight out of a fashion magazine. From the Tom Ford sunnies shading her pupils to the denim Carolina Herrera dress draping her body so perfectly to the Aquazurra "Deneuve" pumps enhancing her stride, Markle looked amazing from head to toe.

Now, sit back and watch the Meghan Markle effect run its course. As do all things the Duchess wears, that J.Crew bag taking over the internet may soon get a dreaded "sold out" stamp, since copying Markle's style won't exactly break the bank this time.

You, too, could embrace the wicker bag trend à la Meghan Markle with the exact clutch the Duchess wore. The mini summer bag currently on sale at J.Crew is still available, at least for now. There is even a cheaper, bright citron version available if a bolder bag would suit your fancy. Just thank your lucky stars that the new royal hasn't abandoned her love for the reasonably priced J.Crew now that she has the industry's top designers at her beck and call. If you're on Markle's style watch then you know her closet is filled with J.Crew staples like the navy coat she wore during a trip to Birmingham or the leather lace-up sandals that once kept her comfy at the airport.

Basically, it doesn't look like Markle's fashion train is going to slow down anytime soon. Considering every ensemble she wears outdoes the last, the Duchess probably couldn't even look drab if she tried. This trending wicker bag now added to her collection is just another big Meghan Markle fashion moment added to the books.